In the wake of yet another COVID-19 surge — with the Omicron variant leading to a massive spike in cases at the end of 2021 — artists, crews and audiences nevertheless geared up for a comeback year for live music. Leading the way early on is Tool. After kicking off their 2022 tour on Jan. 10 in Eugene, Ore., the hard-rock veterans earned $13.8 million from 120,000 tickets sold last month, according to figures reported to Billboard Boxscore.

Still, January is typically the slowest month of the year for bands on the road, as album and touring cycles taper off before Christmas and only gradually start to kick back into gear as February nears. This year was no exception, either, particularly with cases of the Omicron variant not peaking until the middle of the month, and leading to cancellations from Elton John, Dead & Company, Adele and more.

As a result, Tool’s haul for January is the lowest gross for a No. 1 tour since Billboard began its monthly touring charts in February 2020. The previous “record”-holder? Elton John’s $19.7 million take in January 2020.

Reporting for Tool’s 2022 tour is not yet complete. Four shows remain unreported and could have pushed their January gross toward the $20 million mark. If the missing four shows were in step with the 10 dates submitted to Billboard Boxscore, the band’s monthly gross would bump from $13.8 million to $19.3 million, approaching John’s 2020 total.

The biggest of the reported shows was the Jan. 11 appearance at the Tacoma Dome in Washington, earning $2 million from 18,714 tickets. Nine of the 10 shows grossed more than $1 million and eight of them sold more than 10,000 tickets.

Speaking of Sir Elton, the monthly Boxscore mainstay is back with new dates from the Farewell Yellow Brick Road Tour, at No. 2 with a $10.1 million take and 69,200 tickets sold. John previously crowned the Top Tours list in February, September and November of 2019, plus his aforementioned win in January 2020.

Expect John to be as consistent on the Boxscore charts in 2022 as he was in 2019, as his Brick Road routing extends through late November, before resuming in early 2023. He’ll tour North America through the end of April, hit Europe in May and June, and return to North America for much of the rest of the year.

At No. 3, by a hair, Reba McEntire makes her monthly Top Tours debut with $9.9 million in the bank from nine shows and 87,000 tickets sold. She’s followed by another two country tours, with Kane Brown and Eric Church at Nos. 4-5, respectively. Brown’s 132,000 tickets sold make his tour the most attended run of the month. 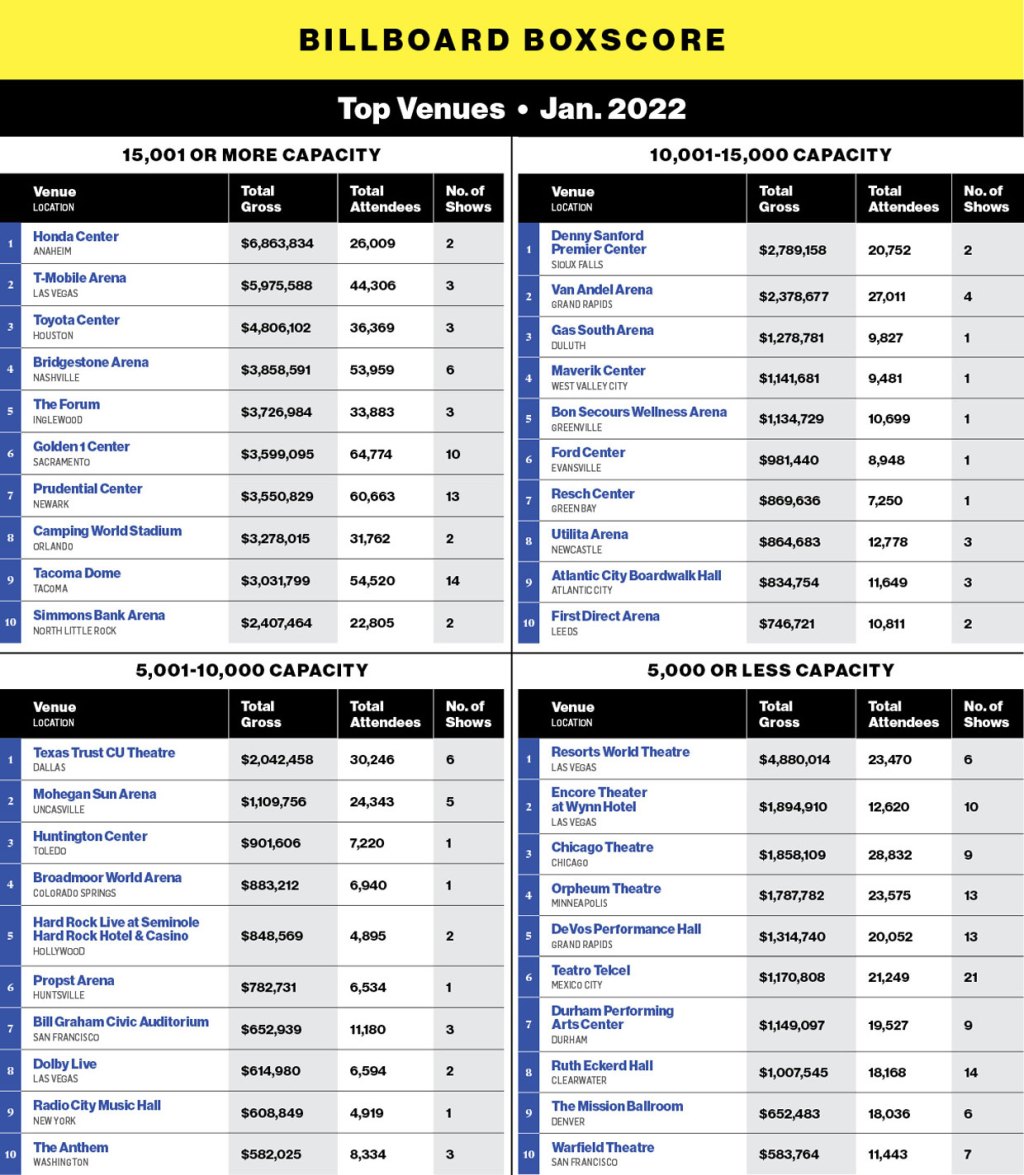 Resorts World Theatre is January’s third-highest grossing venue of any capacity, behind Anaheim’s Honda Center ($6.9 million) and Vegas’ own T-Mobile Arena ($6 million), both in the 15,001+ capacity division.

While January grosses were low relative to recent months, the Top Promoters ranking reflects some promise for the rest of 2022. AEG Presents leads the list with $62.7 million, bolstered by a handful of tours hitting the ground running. John, Brown, Church, Kacey Musgraves and JoJo Siwa cover the top 10 of Top Tours and will all continue into the spring.

Further down the list, two international promoters re-appear, with Mexico’s OCESA at No. 7 ($2.7 millio; 66,000 tickets) and Australia’s TEG Dainty/TEG Live at No. 10 ($2 million; 37,866 tickets). In the post-COVID touring landscape, the U.S. has returned in most-full force but much of the rest of the world has been slower to re-open. These successes from Latin America and Oceania, alongside charting venues in the U.K., point to a stronger global live music business in the year ahead. 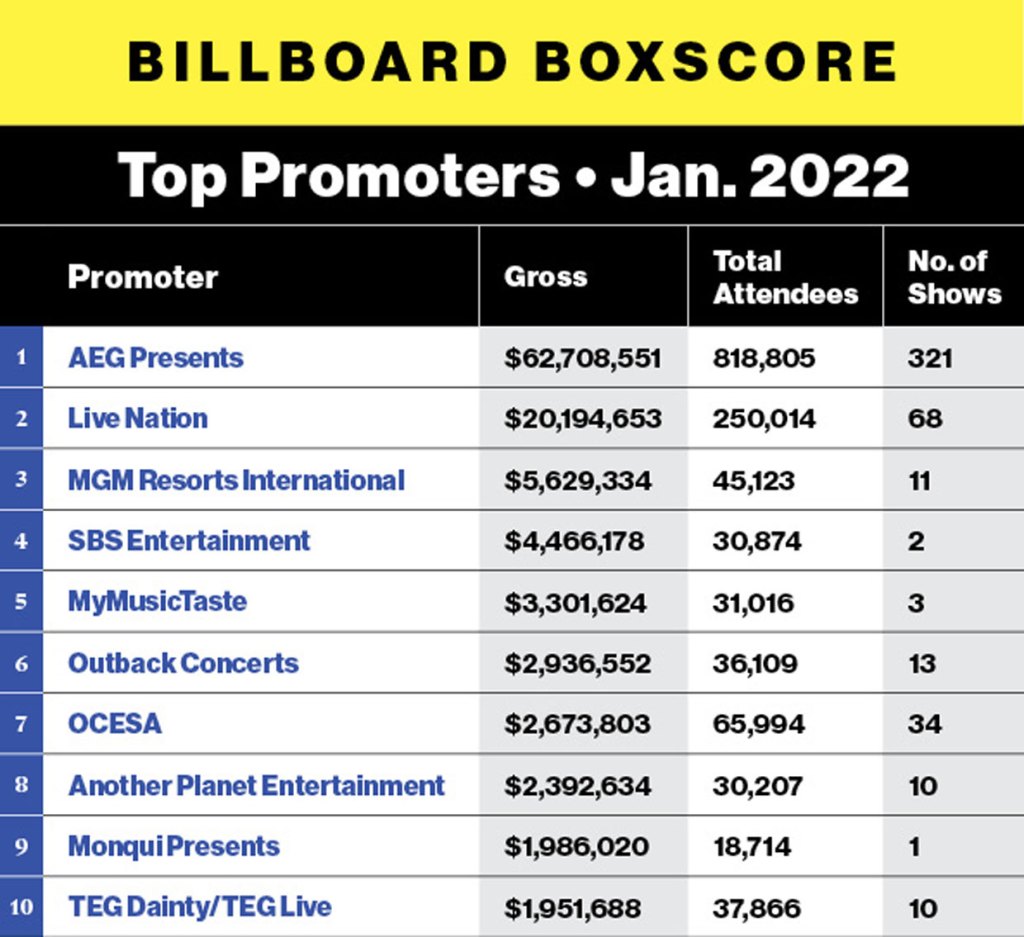 The Ledger: There’s Still Room for Consolidation in the Festival Market