The Kid LAROI, Justin Bieber, and Adele helped Sony Music Publishing continue its winning streak through the end of 2021. The company took the No. 1 spot on both the Top Airplay and Hot 100 publisher rankings for last three months of the year — its third consecutive quarter atop both rankings.

Sony Music Posts $1.6B in Quarterly Revenue as Streaming Jumps 35%

The company, which has led the Top Airplay ranking for 17 of the last 18 quarters, had a stake in 59 of the fourth quarter’s Top 100 radio airplay songs — the same amount it had in the third — and 51 Hot 100 songs, down from 63 tunes in the previous three months. It also had a stake in the No. 1 song on both charts: The Kid LAROI & Justin Bieber’s “Stay” on Top Airplay and Adele’s “Easy On Me” on Hot 100 Songs.

Four other publishers had a piece of “Stay,” including Universal Music Publishing Group, Warner Chappell Music, Kobalt, and Pulse.

UMPG also holds a stake in “Easy On Me,” which aided it in tying Sony on the Hot 100 chart with 51 songs. Its lower share, 21.47%, resulted in its No. 2 ranking, but it was almost a two-percentage point increase over its third-quarter share of 19.80%. The publisher also saw a four-percentage point increase in its Top Airplay performance — 55 song placements for a 21.49% share, up from 17.56% for July through September when it had a stake in 45 songs— which enabled it to reclaim the No. 2 ranking, up from No. 3 in the previous quarter.

UMPG claimed its second-place finish in the Hot 100 despite a falling song count from 57 to 51 tunes.

Third-place finisher Warner Chappell saw market share and song count decreases from the third quarter in both categories. The publisher was down from 17.90% in the third quarter to 14.80% in the fourth and from 52 to 44 songs on the Hot 100 Songs ranking; and from 19.22% to 16.08% and from 58 to 51 songs on the airplay chart, while also falling to third place from its third-quarter second place performance. 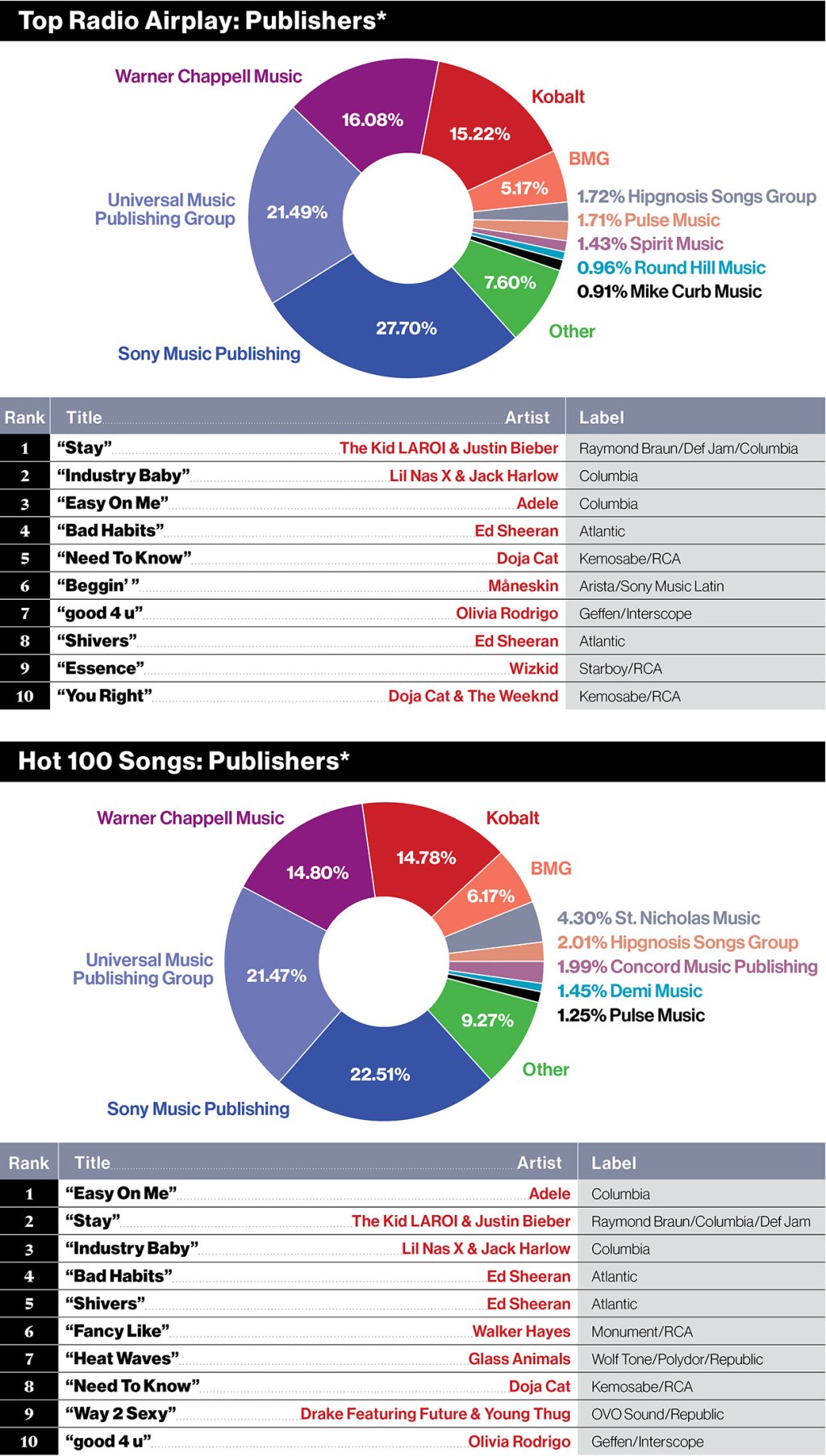 Kobalt and BMG finished fourth and fifth, respectively, on both charts; positions they’ve held for three consecutive quarters. Kobalt duplicated its third-quarter Hot 100 Songs performance, with a 14.78% market share again, while its song count improved to 38 songs from 33 songs in the prior quarter. The company improved its performance on the Top Airplay chart, garnering a 15.22% share, up from last quarter’s 14.45%, but its song count held the same for at 38 for both quarters.

Kobalt strong showing was boosted by one of the publishing companies it provides administration for, the Artist Publishing Group which generated slightly over 10% of Kobalt’s market share, or 1.52% of the overall Top 100 radio airplay songs.

BMG has held the fifth-place position for 11 quarters of the 12 quarter existence of the Hot 100 publisher rankings and for three consecutive quarters on the Top Airplay rankings. For the latter chart, it snared  a 5.17% share from 20 songs, including Wizkid’s “Essence,” the No. 9 track on the chart. Those numbers are down from 6.33% and 26 songs in the previous quarter.

Although BMG’s fifth-place ranking did not change, its Hot 100 Songs performance improved quarter to quarter. Market share grew to 6.17% from 4.68% and song count increased to 22 from 17. Fourth-quarter placements included the No. 11 song, Elton John &  Dua Lipa’s “Cold Heart (Pnau Remix).”

Rounding out the second half of the publisher rankings Hipgnosis and Pulse qualified for both rankings. On the Top Airplay chart, the companies finished No. 6 and No. 7, respectively, with just 0.01 of a percentage point separating them. Hipgnosis finished the quarter with a 1.72% share from four songs, including Glass Animals “Heat Wave,” the No. 14 track; and Pulse, with 1.71%, albeit from eight songs — among them, including the aforementioned “Stay.”

Dr. Luke was the reigning songwriter on the Top Airplay chart, thanks to co-writing credits on three Doja Cat songs — “Need To Know” (No. 5); “You Right” (No. 10); and “Kiss Me More” (No. 15). He also has a co-writing credit for Latto’s “Big Energy” (No. 66). Dr. Luke publishes his music through his own Kasz Money Publishing, which is administered by Kobalt.

Moving over to the Hot 100 chart, Hipgnosis and Pulse also made the Hot 100 Songs chart. The former finished No. 7, with a 2.01% share — its fourth consecutive appearance on the ranking with Heat Wave also its top placement but on this chart at No. 7. Pulse took 10th place with a 1.25% share on the strength of seven songs, including “Stay.”

The top songwriter for the fourth-quarter Hot 100 Chart is the late Johnny Marks, who landed four classic holiday tunes that are perennials on the fourth-quarter chart: Brenda Lee’s “‘Rockin’ Around the Christmas Tree,” No. 16; Burl Ives’ “Holly Jolly Christmas,” No. 19; Gene Autry’s “Rudolph The Red Nosed Reindeer,” No. 62; and Chuck Berry’s “Run Rudolph Run,” No. 77. (Marks was the sole songwriter for the first three songs and shares a co-writing credit with Marvin Brodie on the last.)

Marks’ music is published  by St. Nickolas Music, which he founded, not surprisingly finished No. 6 on the Hot 100 Songs chart for the fourth quarter with a 4.3% market share.

Concord Music Publishing was absent from the third-quarter Hot 100 Songs top 10 but returns for the fourth thanks in part to its Christmas repertoire. The publisher finished No. 8 with a 1.99% slice of the market from seven songs, almost half of them holiday tunes. The Dean Martin chestnut, “Let It Snow,” was the highest ranking of the trio at No. 56.

Music Synch Revenue Is Growing Faster Than Ever