An 11 percentage-point surge by Universal Music Publishing Group resulted in a split decision for the top honors in Billboard’s second-quarter 2022 publisher rankings, while Atlanta rapper Latto’s “Big Energy” and Harry Styles’ “As It Was” took the No. 1 spots on the Top Radio Airplay and Hot 100 Songs publishers charts, respectively.

Universal’s music-publishing division finished at No. 2 on the second-quarter Radio Airplay ranking, boosting its market share from 21.74% in the first quarter to 22.39%, while its song count increased by one to 54. 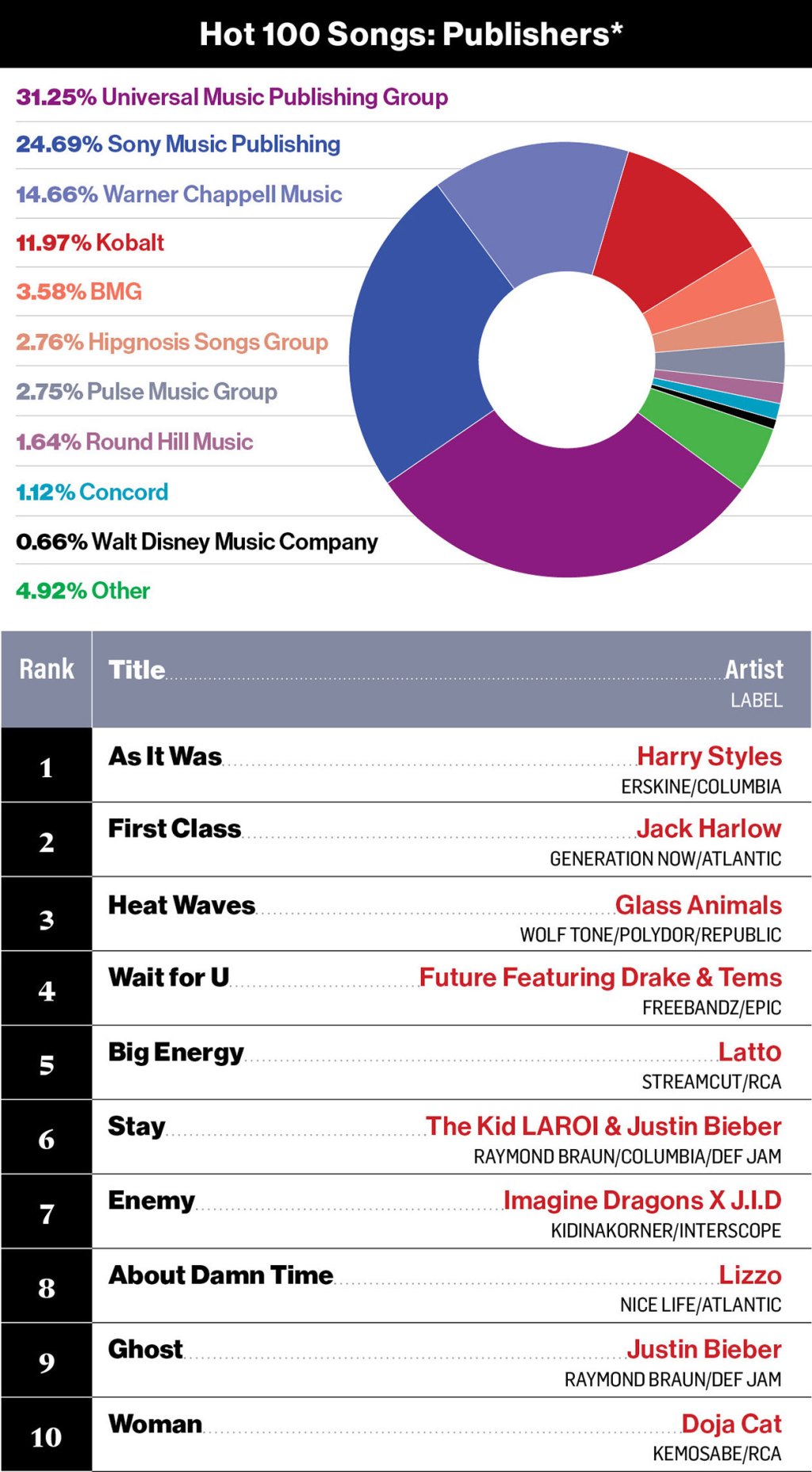 Sony, UMPG and Kobalt have stakes in Latto’s “Big Energy,” which powered its way to the peak of the Top Radio Airplay chart, and UMPG and Pulse are the publishers of Styles’ “As It Was,” which was No. 1 on the Hot 100 ranking.

For the second consecutive quarter, Glass Animals frontman Dave Bayley, whose catalog is administered by Hipgnosis, ranked as the No. 1 songwriter on both charts, based on the strength of one song: the band’s long-charting hit, “Heat Waves,” which was No. 3 on the Hot 100 song publishers ranking and No. 4 on Top Radio Airplay.

In addition to the Styles track, new entries that made the top 10 of both the Radio Airplay and Hot 100 charts are Jack Harlow’s “First Class,” Imagine Dragons X J.I.D’s “Enemy,” and Doja Cat’s “Woman.” Dove Cameron’s “Boyfriend” makes its first appearance in the Radio Airplay top 10, while Future’s “Wait for U” (featuring Drake and Tems) and Lizzo’s “About Damn Time” debut in the Hot 100 top 10. 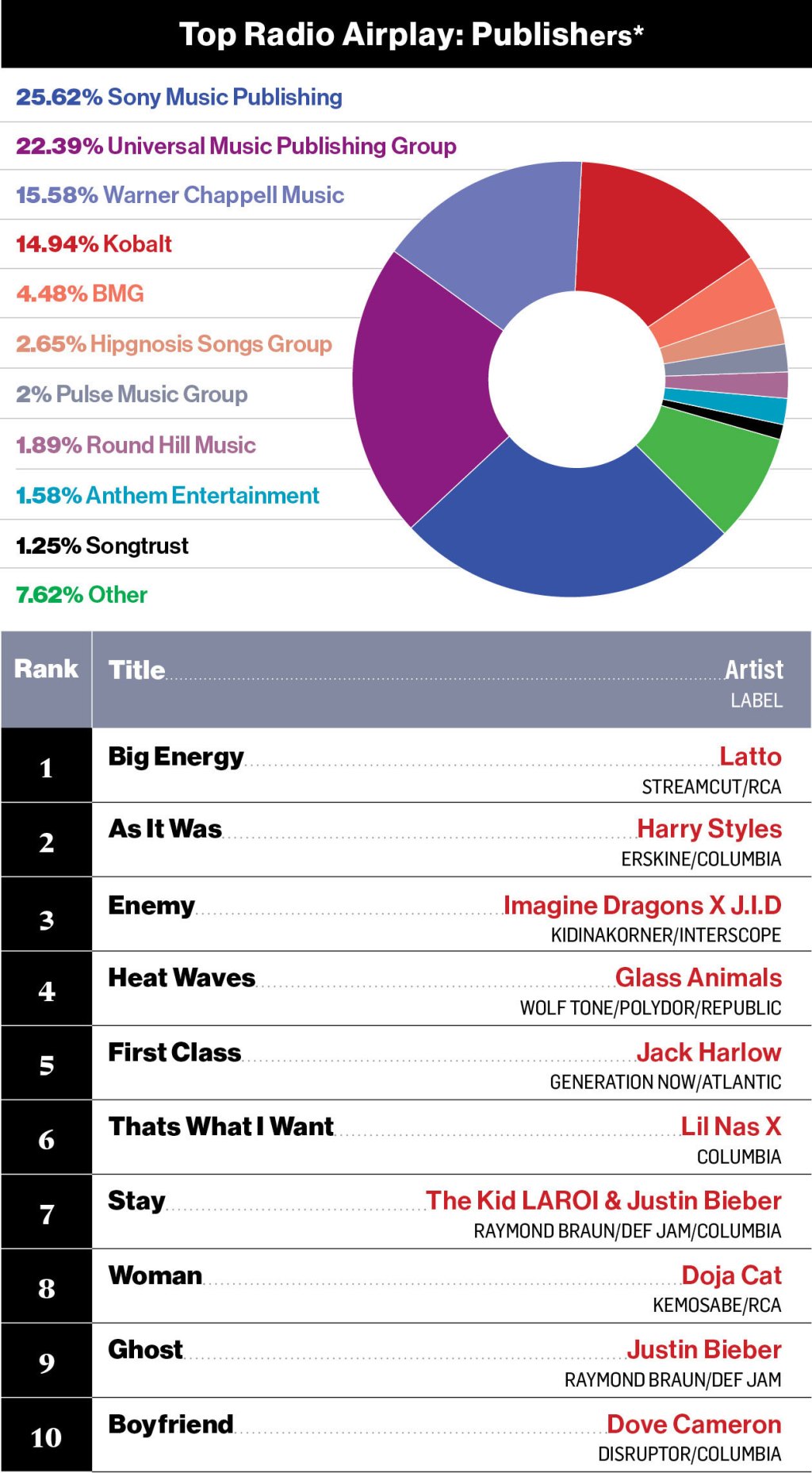 Beyond the battle for the top two spots, Warner Chappell Music extended its dominance of country music publishing to the five-and-a-half-year mark, topping the ranking for a 22nd consecutive quarter. It reclaimed the No. 3 spot on Radio Airplay, up from fourth place last quarter, with a slight percentage gain from 15.51% to 15.58% and a song count that held steady at 54. The publisher’s top track was “Enemy,” which ranked at No. 3 on Radio Airplay. The song placed at No. 7 on the Hot 100 ranking, where Warner Chappell maintained its No. 3 standing among publishers, albeit with a small decrease in market share from 14.99% to 14.66%.

Harlow placed at Nos. 2 and 5 on the Hot 100 and Top Radio Airplay charts, respectively, with “First Class,” but Kobalt’s stake in the superstar rapper did not translate to a boost in the rankings. Quarter to quarter, the publisher held on to No. 4 on the Hot 100 ranking but fell from third to fourth place on the Radio Airplay chart, and in both cases, its market share fell, from 14.93% to 11.97% and from 16.77% to 14.94%, respectively. That is most likely due to Kobalt sharing publishing on “First Class” with Sony, Warner Chappell, BMG and Concord.

Round Hill’s market-share increase from 1.27% to 1.89% lifted the publisher from No. 10 to No. 8 among its Top Radio Airplay competition, largely due to the viral TikTok hit “To the Moon” by JNR Choi and Sam Tompkins.

Country music singer-songwriter Cody Johnson’s “Til You Can’t” helped vault Anthem Entertainment to No. 9 on the chart, the first time it has finished in the top 10 since the second quarter of 2018. And at No. 10, Songtrust makes its first-ever appearance on the Publishers Quarterly charts thanks to Em Beihold’s “Numb Little Bug.”

Tyler, the Creator’s Camp Flog Gnaw Festival Will Not Return for 2022