Sony Music Publishing led the publisher rankings on both the Top Radio Airplay and Hot 100 charts in the first quarter 2022, marking its fourth consecutive No. 1 on both charts and its eighth consecutive No. 1 on the Hot 100. Meanwhile, British rock band Glass Animals’ “Heat Waves” and Lin-Manuel Miranda’s “We Don’t Talk About Bruno” single-handedly catapulted their respective publishers, Hipgnosis Songs Group and Walt Disney Music, onto one or both of the rankings.

Universal Music Publishing Group, which finished No. 2 on both rankings, also had mixed results. Its Radio Airplay market share grew to 21.74% from 21.49% in the fourth quarter, albeit with a quarter-to-quarter decline in song count from 55 to 53 of the top 100 songs. Its top track on both charts: also “Easy on Me.” 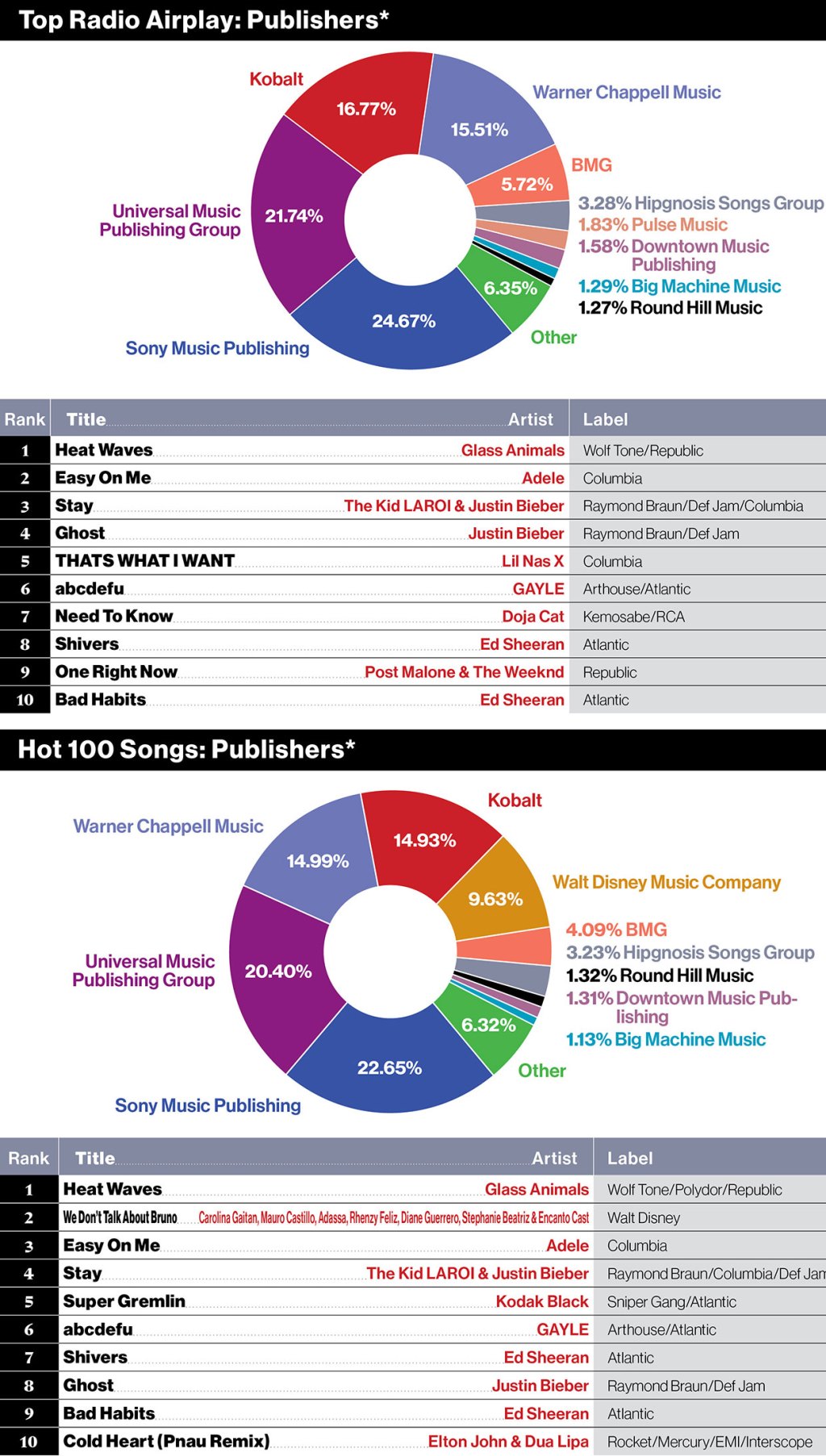 Warner Chappell Music maintained its No. 3 rank on the publishers chart with a 14.99% share, up from 14.8% in the prior quarter. Its song count also grew quarter-to-quarter from 44 to 49, and its top track was The Kid LAROI and Justin Bieber’s “Stay.” On the Radio Airplay chart, Warner Chappell fell to fourth place, surpassed by Kobalt, which benefited from a 1.5 percentage-point surge in market share to 16.77% with a share of 41 tunes, up from 38 in the fourth quarter. Kobalt placed fourth on the Hot 100 ranking.

Warner Chappell’s drop to No. 4 was precipitated by a market-share decline from 16.08% to 15.51%, although its song count on Radio Airplay rose from 51 to 54, including “Stay.” In country music, Warner Chappell remained the No. 1 publisher for its 21st consecutive quarter.

“Heat Waves” was the No. 1 song on both charts, and its writer, frontman Dave Bayley, emerged as the top songwriter on the Radio Airplay chart for the quarter and No. 2 on the Hot 100 ranking behind “We Don’t Talk About Bruno” writer Lin-Manuel Miranda. The successes of those songs were the sole reasons that Hipgnosis (“Heat Waves”) landed in the top 10 of both rankings and Walt Disney (“Bruno”) made the Hot 100 publishers ranking for the first time since it was established in 2019.

Thanks to “Heat Waves,” Hipgnosis held on to its rankings from the previous quarter — No. 6 for Top Radio Airplay and No. 7 for the Hot 100 — but the company almost doubled its Radio Airplay market share, 3.28%, to last quarter’s 1.72%, but the latter percentage was due to four song placements, as opposed to one this time. Hipgnosis’ 3.23% slice of the Hot 100 chart was also an improvement from the 2.01% it garnered in the fourth quarter of 2021.

Miranda’s performance on that chart was so strong that it catapulted Walt Disney Music Company into the publisher rankings for the first time since the third quarter of 2008. Back then, it was No. 10 thanks to a piece of the action in Keith Urban’s “You Look Good In My Shirt.” In the first quarter of this year, Disney claimed a 9.63% share, good for No. 5 on the Hot 100 publishers ranking, thanks to the seven songs Miranda wrote, but the publisher did not land a single one of those songs on the Top Radio Airplay chart.

While BMG maintained its No. 5 ranking in the Top Radio Airplay chart with a 5.72% share, half a percentage point better than the 5.17% it held the previous quarter, but its song count fell to 18 from 20 during that time span. But after nine consecutive quarters at No. 5 on the Hot 100 publishers ranking, BMG was overtaken by Disney and fell to No. 6 with a 4.09% share, down from 6.17% in the prior quarter. Likewise, its song count fell from 22 songs in the fourth to 14 songs in the first quarter of this year. Its highest placement in that chart came from Kodak Black’s “Super Gremlin.”

Filling out the rest of the Hot 100 publisher rankings were Round Hill Music, No. 8 with 1.32% and seven songs; Downtown Music Publishing, No. 9, with 1.31% and two song placements; and Big Machine Music, No. 10 with 1.13% and stakes in three songs. All three publishers did not make last quarter’s cut.

At the bottom of the Top Radio Airplay chart, Pulse Music Group held on to its No. 7 ranking from last quarter and saw its market share rise quarter-to-quarter from 1.71% to 1.83%. Round Hill Music also made the list for its second consecutive quarter but slipped from No. 9 to No. 10 despite seeing an increase in market share from 0.96% in fourth quarter 2021 to 1.27%.

Finally, Downtown Music Publishing returned to the Top Radio Airplay ranking for the first time since the first quarter of 2021 with a 1.58% market share and four song placements — good enough to land the No. 8 spot. After a one-quarter absence, Big Machine also returned at No. 9 with a 1.27% share from four songs.

METHODOLOGY
For the Top 10 Publishers Top Radio Airplay chart, percentage calculations were based upon the overall top 100 detecting songs from 2,012 U.S. radio stations electronically monitored by Luminate 24 hours a day, seven days a week during the period of Dec. 31, 2021, to March 30, 2022. For Top 10 Publishers Hot 100 Songs, percentage calculations were based upon the top 100 songs as ranked by Billboard Hot 100 points calculated from digital sales, streaming and Luminate-tracked radio airplay detections during the period of Dec. 31, 2021, to March 31, 2022, reflecting the issue dates of Jan. 15 through April 9, 2022. Publisher information for musical works on both charts has been identified by the Harry Fox Agency. A “publisher” is defined as an administrator, copyright owner and/or controlling party.

The Ledger: There’s Still Room for Consolidation in the Festival Market