It’s hard to fathom now — in the era of Twitter and 24-hour news cycles — but back in the mid-1990s Billboard was one of the only major publications dedicating time and significant column space to Pearl Jam‘s herculean fight with Ticketmaster over ticket prices and fees. And the reporter who doggedly followed the story — about the hottest rock band taking on the world’s top concert ticket seller — every step of the way was Eric Boehlert, the music biz muckraker-turned-media critic who died this week in a tragic bicycling accident.

In early 1994, Pearl Jam was riding high from the October release of their sophomore album Vs. and were mounting a second leg of a tour to support it when the group became disillusioned by Ticketmaster service charges, which they deemed excessive. After the spring tour wrapped with a triumphant appearance on Saturday Night Live, they began thinking about summer dates — and an alternative way to sell it. Below is where Boehlert picks up the story and proceeds to follow it over the next year and a half.

“Eric was super-smart, highly creative, a diligent reporter and crazy about music,” Ken Schlager, Billboard’s former executive editor, said earlier this week. “In other words, he was perfect for Billboard.”

April 23, 1994: Pearl Jam tells promoters that they’ve had it with Ticketmaster’s service fees and would attempt to piece together its summer tour with prices and fees well below those of Ticketmaster’s. In this front-page story, the band says that it will “balk” and just play places like farm fields if promoters reject alternative ticketing deals.

May 1994: Pearl Jam postpones its summer tour. In a later roundup for the magazine (July 8, 1995), Boehlert explains that the band had already filed a memo alleging Ticketmaster’s exclusive contracts with venues amounted to a monopoly over the marketplace. (Ticketmaster denied those charges.)

June 11, 1994: Boehlert reports that Pearl Jam postponed its tour not because of exhaustion but because promoters rejected a price cap on tickets and accompanying service charges. It is in this story that Boehlert confirms reports that lawyers for the band had recently sent the Justice Department’s antitrust division a memo accusing Ticketmaster of pressuring promoters to not work with Pearl Jam on alternative ticketing. The DOJ confirmed that it was looking into “the possibility of anti-competitive practices” by the ticketing industry as a whole.

June 25, 1994: Pearl Jam manager Kelly Curtis tells Boehlert that the band is “committed to touring with cheap tickets.” Also in the issue, Billboard’s Bill Holland reports that a House subcommittee led by Rep. Gary Condit (remember him?) would probe the Ticketmaster-Pearl Jam controversy and its accompanying “allegations of monopolistic business practices” by the ticketer. 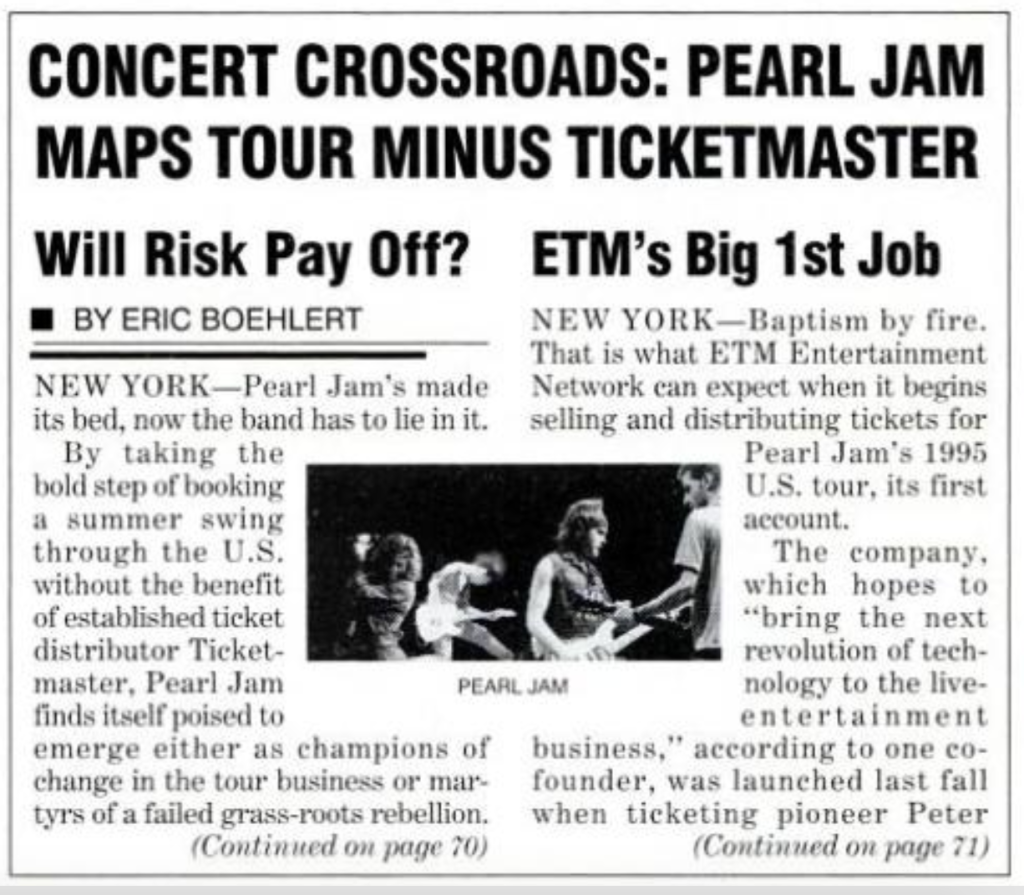 June 24, 1995: Frustrated at not being able to book enough mainstream venues that would work with ETM — and after several non-conventional venues failed to pan out — a worn down Pearl Jam concedes that they may need to return to Ticketmaster’s not-so-loving embrace. “We took this as far as we could,” PJ manager Kelly Curtis told Boehlert. “At some point, it’s time to get back to the music and playing.”

July 15, 1995: Janet Reno’s DOJ drops its yearlong investigation into the ticketing business, effectively handing Ticketmaster the title belt as “winner in its highly contentious heavyweight bout” with Pearl Jam. Boehlert notes that the DOJ was perhaps not swayed to believe Ticketmaster was violating antitrust laws by entering exclusive contracts with venues.

July 22, 1995: While it didn’t end well for Pearl Jam, its tussle with Ticketmaster did expose long-simmering complaints that TM had no real competition. Here, Boehlert keeps at it — reporting on new challengers to the king, including Tele-charge, ProTix and… Dillard’s?

In October 1995, Boehlert was promoted to senior writer at Billboard. But a little over a month later, he was gone. Scooped up by Rolling Stone where, naturally, he continued to write about Pearl Jam and Ticketmaster.

AIM CEO Paul Pacifico to Step Down at End of 2022