Over a trillion times a year, somebody streams a song within the United States and sets in motion the process of paying royalties to the rights holders and creators responsible for the music. Each individual payment is minute — usually less than a cent — but for the most popular songs, royalties can add up to millions of dollars in a single year. Dua Lipa’s “Levitating,” for example, which was 2021’s most-streamed song in the U.S., according to MRC Data, earned her, its songwriters and its various rights holders about $4 million, Billboard estimates. Exactly how each involved party is paid varies, but the recipients are the same: record label, performing artist, songwriter, music publisher and an intermediary or two.

Both the sound recording and its underlying musical work receive royalties paid from the DSP — the commonly used abbreviation for digital service provider, such as a download store or a streaming service. Most typically, except for direct deals that exist, record labels collect and pay the recording artist from their share of royalties (for audio streams that’s about 80% of a total stream value for rights holders, and slightly less for video streams). Publishers collect and pay songwriters what’s called a mechanical royalty that represents a musical work embedded in a copy of a recording (about 10% of a total royalty). And performance rights organizations (PROs) are paid performance royalties just as they receive royalties when a song is played on the radio, in a retail store or at a concert, that it then evenly splits between publisher and songwriter (an additional 10% of a total royalty) after taking a small fee.

Most streaming revenue comes from user subscription fees for services such as Spotify, Apple Music and Amazon Music Unlimited. In simple terms, the DSPs divvy their pools of subscription revenue according to the number of times a track was streamed in a particular month. (DSPs with freemium business models — Spotify, YouTube, Pandora, SoundCloud — also pay rights holders a share of their advertising revenue.) Once the royalties are calculated, a DSP makes separate payments to record labels for the sound recording and to publishers and PROs for the musical work.

Royalty rates differ from stream to stream because some record labels negotiate better terms than others — and exactly how different labels’ royalties are calculated is hidden behind an opaque process and non-disclosure agreements, frustrating artists and some labels who feel disadvantaged by an uneven playing field. What’s more, licensing agreements might call for more complicated calculations in some cases. For example, a DSP might owe a minimum royalty if the amount falls under a threshold set by the label’s licensing terms. This was seen in the 2000s, the DSPs’ early years, when labels insisted on being paid a certain amount when DSPs generated little advertising revenue. Labels might also insist on a minimum payment for low-priced subscriptions that would otherwise result in a smaller-than-desired royalty.

The owner of the sound recording — usually a record label, but also, increasingly, the artist — receives about 80% of the total royalty, which is then shared with the artist at a rate dependent on their recording contract. A 20% royalty for the artist is not uncommon, which works out to about 16% of the total audio stream value going to the artist with 64% going to the label.  That money won’t, however, necessarily end up in the artist’s pocket. Only if an artist has recouped their advance and their share of expenses will the label pay royalties for the stream. Otherwise, royalties earned will reduce the artist’s negative balance for an advance and such expenses as marketing, promotion and tour support.

An independent artist who owns the sound recording will receive the entire label share, minus any cut owed to the distributor (which can be a flat fee, or a percentage that’s typically 20% or less).

A musical work — also referred to as the underlying composition, or the song itself — earns a fixed percentage of revenue regardless of how a record labels’ royalty is calculated. At current rates, musical work’s royalties are roughly 20% of an audio stream’s total royalties. Half of those royalties are for mechanical royalties for the song embedded in the recording and are owed to a music publisher; the other half derive from the “performance” of the musical work and are paid to a PRO, which collects a fee of about 12% in the U.S. (it can be more elsewhere) before distributing the rest to the publisher and songwriter. Typically, publishers and songwriters split the musical work’s share of royalties, although in some cases, a songwriter owns their own publishing rights and pays a publisher or administrator a smaller fee to collect and process their money. After considering the splits and a PRO’s administration fee, publishers and songwriters each get about 9.4% of the total royalty.

Whereas a recording usually only has one label or artist, songwriters’ streaming income can drop significantly when a song has multiple co-writers. Country, R&B, hip-hop and pop songs typically have more than one writer. A song that incorporates a sample will typically give credit and pay royalties to songwriters of the song being sampled. For example, Nine Inch Nails’ Trent Reznor received a songwriting credit for the sample from his song “Further” used in Lil Nas X’s “Old Town Road.” Producers often share songwriting credits, too. The nine co-writers on “Stay” by The Kid LAROI and Justin Bieber — three of whom are producers — must split the songwriter’s share of royalties. If the publishers and songwriters have a 50/50 split, and if the co-writers receive an equal share of the songwriters’ share, each of the nine songwriters would take home a little over 1% of the total royalty — about five-thousandths of a cent per audio stream.

Overall, for every $1 a streaming service pays in royalties, rights holders collectively earn about 73 cents, creators take a little over 25 cents and the PRO gets a little over 1 cent. Breaking that down for recorded music revenue, the artist receives about 16 cents and the label takes about 64 cents. On the publishing side, in a typical case, the songwriter and publisher each get 9.4 cents.

Other music formats have far simpler royalty calculations that intuitively make sense to people. For sales of CDs, vinyl records and downloads, the record label collects money from its distributor and pays recording artists based on the terms in the recording contract. When the artist owes the label for expenses or has not recouped an advance, any royalties will reduce that negative balance. When the artist is no longer in arrears, the label cuts a royalty check to the artist. Music publishers are owed a mechanical royalty for each copy of a musical work, whether a physical or digital format. Currently, the standard rate for a mechanical royalty is 9.1 cents per track. However, when the performing artist is also the songwriter, the label will have negotiated a lower mechanical royalty rate or will cap the amount owed at 91 cents for an album (so it does not owe a standard mechanical rate for each song on an album with 11 or more songs, which would eat into its margins). Artist-songwriters don’t take a reduced mechanical rate for streams, however, because DSPs pay royalties directly to publishers and PROs.

Many people inside the industry think royalty payments are a convoluted, nonsensical mess that doesn’t pay artists and songwriters fairly. Lawmakers in the U.K. have taken interest in how little some creators earn even when their songs are streamed millions of times. And there have been calls around the industry to change some royalty calculations in a way that would benefit less popular artists. For better or worse, however, the current rates and calculations are likely to remain unchanged for the foreseeable future. 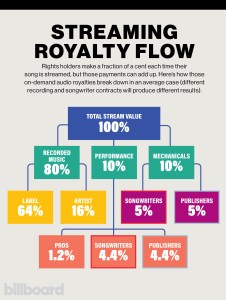 Mechanical royalty — the royalty owed to music publishers when a musical work is embedded in a copy of a recording (on a downloaded track, CD, LP, music video, ringtone et al).

Publisher’s share — the fraction of a musical work’s royalty owed to the music publisher (which will be the songwriter if they retained ownership of the copyright).