It’s been a big week for Kendrick Lamar. His newest release, Mr. Morale & The Big Steppers, debuted atop the Billboard 200 with the biggest frame of the year, and all of its songs hit the Billboard Hot 100.

Lamar has maintained a consistent presence on these charts for the last decade, but Morale is his first release since the launch of Billboard’s global charts in 2020. In his first go-around, he lands all 18 tracks from the set on both the Billboard Global 200 and Billboard Global Excl. U.S. lists. That makes him the 13th hip-hop artist in the last year to score 10 or more songs in a single week on the former chart, and only the fourth to do so on the latter.

With the rise of streaming, it has become common for hip-hop acts to blanket the U.S.-based Hot 100 with songs from new albums, from hit singles to deep cuts. Given the size and influence of the American market in the global streaming economy, that trend has overflowed onto the Global 200, with acts ranging from monolithic superstars such as Drake and Ye to younger upstarts including Gunna and Lil Durk tallying 10, 15, and in some cases, more than 20 songs on the chart in a single week.

But with U.S. data removed from the equation, it’s much rarer for rap acts to find such overwhelming success on the Global Excl. U.S. tally. Hip-hop has American roots and, by nature, is often centered around fast-paced lyrics more than sing-along melodies that helps domestic pop and rock acts transcend geographical and language barriers.

The 18 songs on Morale drew 235,000 streams outside the U.S. in the week ending May 19, according to Luminate. That breaks down to 13.1 million per song. Below, take a look at the debut-week streams for 13 hip-hop albums released in the last year that each generated 10 or more songs on the Global 200 in their debut frames. (For purposes of this research, hip-hop albums are defined as those that have appeared on Billboard’s U.S.-based Top R&B/Hip-Hop Albums chart.) 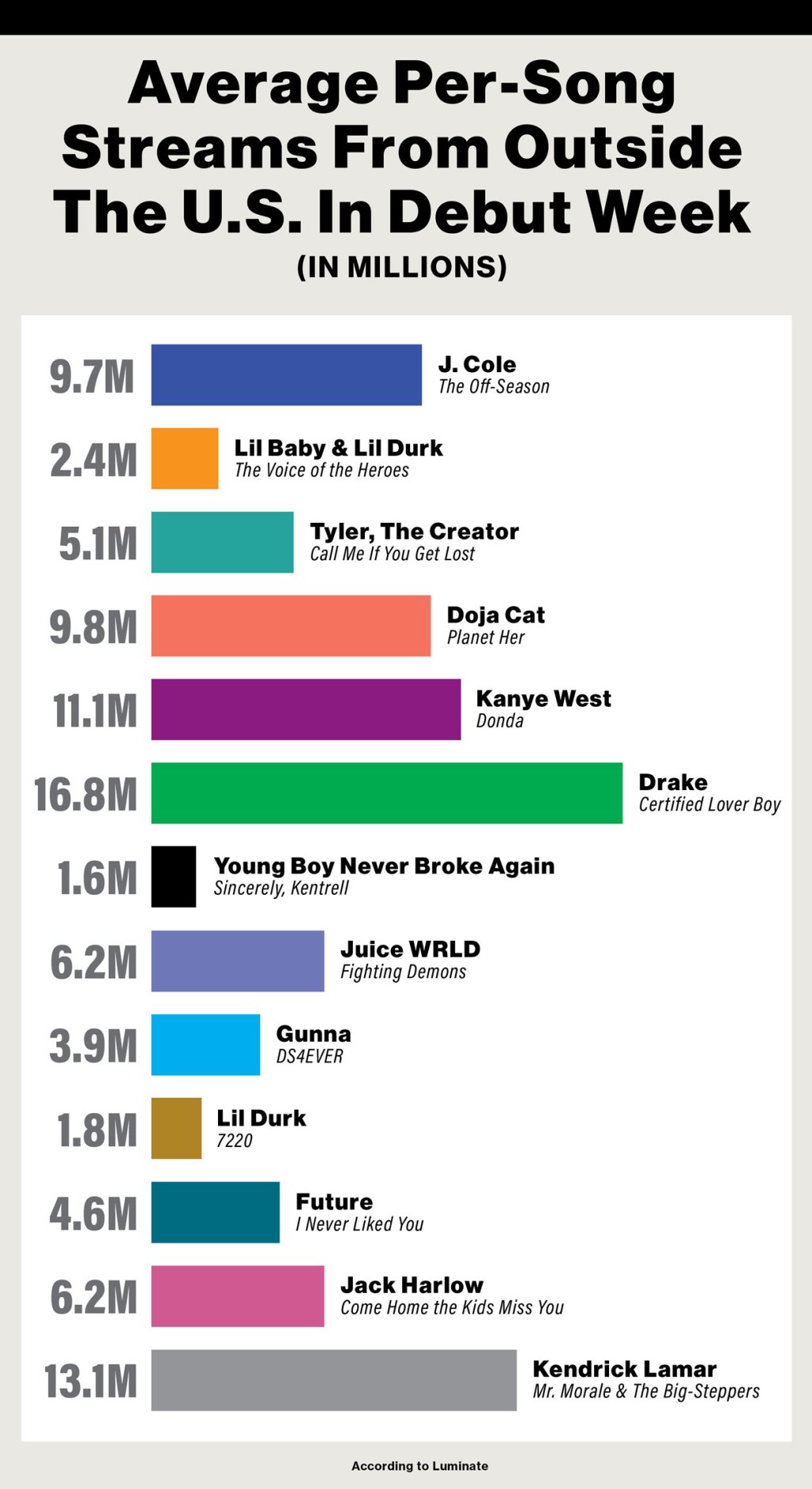 Drake leads with 16.8 million streams per song from his 21-track Certified Lover Boy. Lamar ranks second, followed by Ye’s Donda with 11.1 million. All three landed a tall stack of songs on the Global Excl. U.S. chart (21 for Drake, 18 for Lamar and 22 for Ye) in their respective opening weeks. But they faired even better on the Global 200, with their tracks ranking an average of 28, 50 and 42 positions higher, respectively, when U.S. data was added.

Current songs typically average 25-30% of their global streams from the U.S. and 70-75% from outside. Songs from Mr. Morale & The Big Steppers split 60% from the U.S. and 40% from beyond. Lamar’s significant skew toward domestic activity is more an expected feature of his core genre than an alarming lack of broader global appeal, in line with, if not more balanced than, most major hip-hop albums in the last year.

Below, take a look at how the same 13 albums split their streams between the U.S. and the rest of the world. 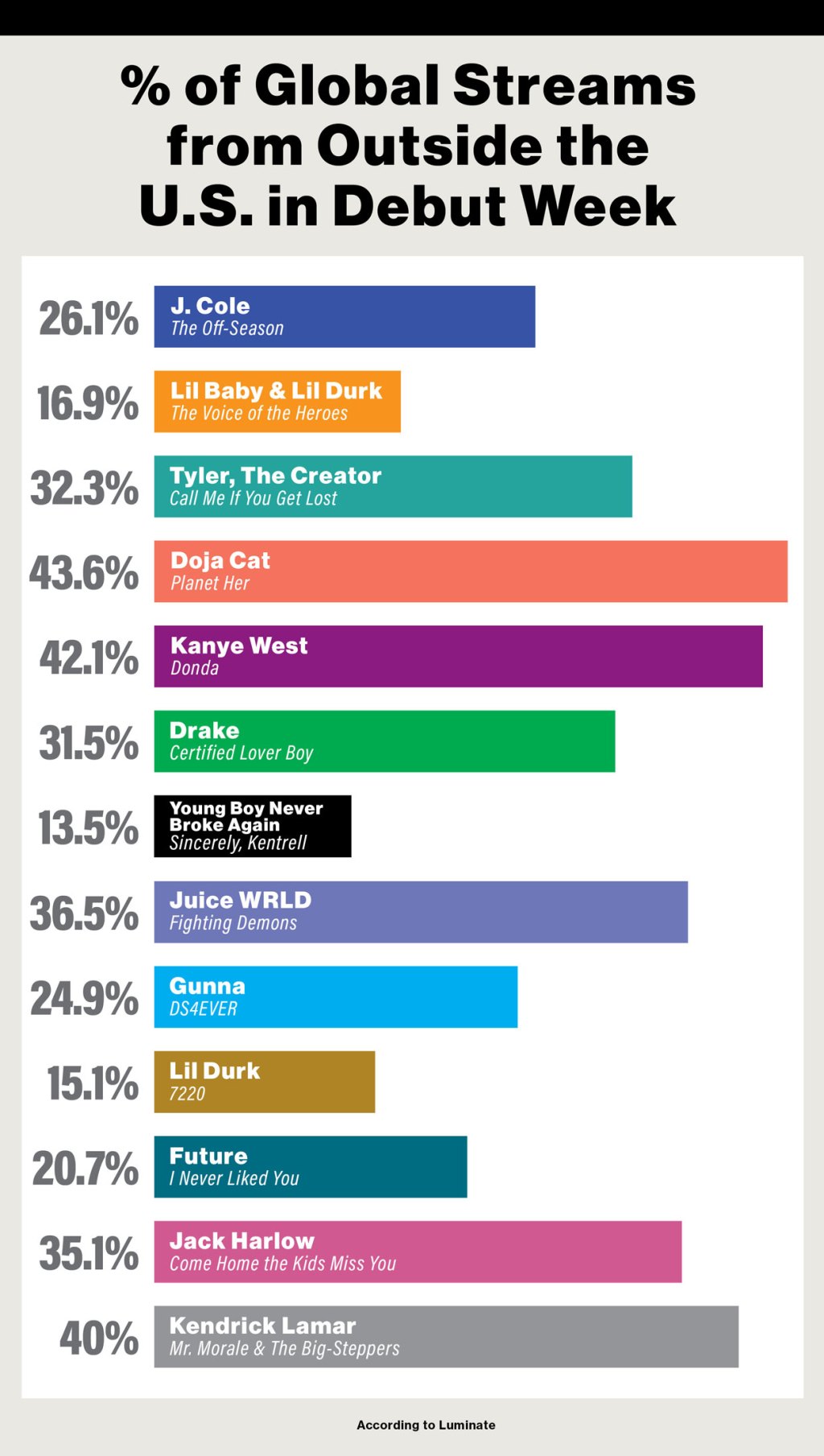 The only albums to surpass 40%, and therefore the only albums with a greater international share than Morale, are Doja Cat’s Planet Her (44%) and Ye’s Donda (42%). Juice WRLD, with his rock-influenced melodies, and Jack Harlow, led by his Fergie-sampling pop hit, follow with 37% and 35%, respectively. After Drake and J. Cole come Gunna, Future, Lil Baby & Lil Durk, Lil Durk’s solo album and, with just 13% of streams from outside the U.S., YoungBoy Never Broke Again.

Generally, this sliding scale tell us that the more pop, and generally more famous an artist, the more luck they’ll have exporting beyond the U.S. Doja Cat’s album blends pop, R&B and hip-hop, leading to crossover airplay and broad recognition. For his part, Ye has been one of the most visible musicians of the century, from his several Hot 100 chart-toppers to his business ventures and tie to the Kardashians. And while they are American institutions, Lamar’s wide critical acclaim and reputation as a Grammy Award and Pulitzer Prize winner has made him a globally recognizable figure.

On the other end of the spectrum, Lil Durk and Youngboy Never Broke Again have become reliable album artists in the U.S. but haven’t yet crossed over in the way of pop radio or viral music videos, stunting their spread outside the country. While songs from Youngboy’s Sincerely, Kentrell averaged 10 million streams in the U.S. in their debut week, that number shrinks to just 1.6 million outside the U.S.

Learn to Be a Star: 5 New Latin Acts Get a Shot With Help From Art House Academy and Universal Latin

The Elvis Business Is Booming Into the Billions

The Ledger: HYBE Is Playing Moneyball With BTS’ Solo Projects