Coldplay has been hovering in the upper reaches of Billboard’s monthly Top Tours chart for most of the year. The U.K. pop-rock group was No. 5 in March and April, powered by 11 shows in Latin America, and hit Nos. 3 and 7, respectively, in May and June during a 12-date trek through North America. But once it arrived in Europe, the band struck gold, with the first 11 continental dates of the Music of the Spheres Tour making it the highest-grossing act of July.

According to figures reported to Billboard Boxscore, Coldplay’s stops in Berlin; Paris; Frankfurt, Germany; and Warsaw, Poland, earned a combined $66.7 million and sold 731,000 tickets, averaging $6.1 million and 66,000 tickets per night.

That average attendance far surpasses the tour’s nightly pace of 53,000 tickets in both the U.S. and Latin America. Every show on the worldwide tour has been reported as sold out, but the capacities on European stadiums are simply bigger than in the U.S. Paris’ Stade de France, the top-grossing venue of the month, opened its doors to 80,000 Coldplay fans for each of four shows between July 16-20, while most American stadiums fluctuated between 45,000–55,000. 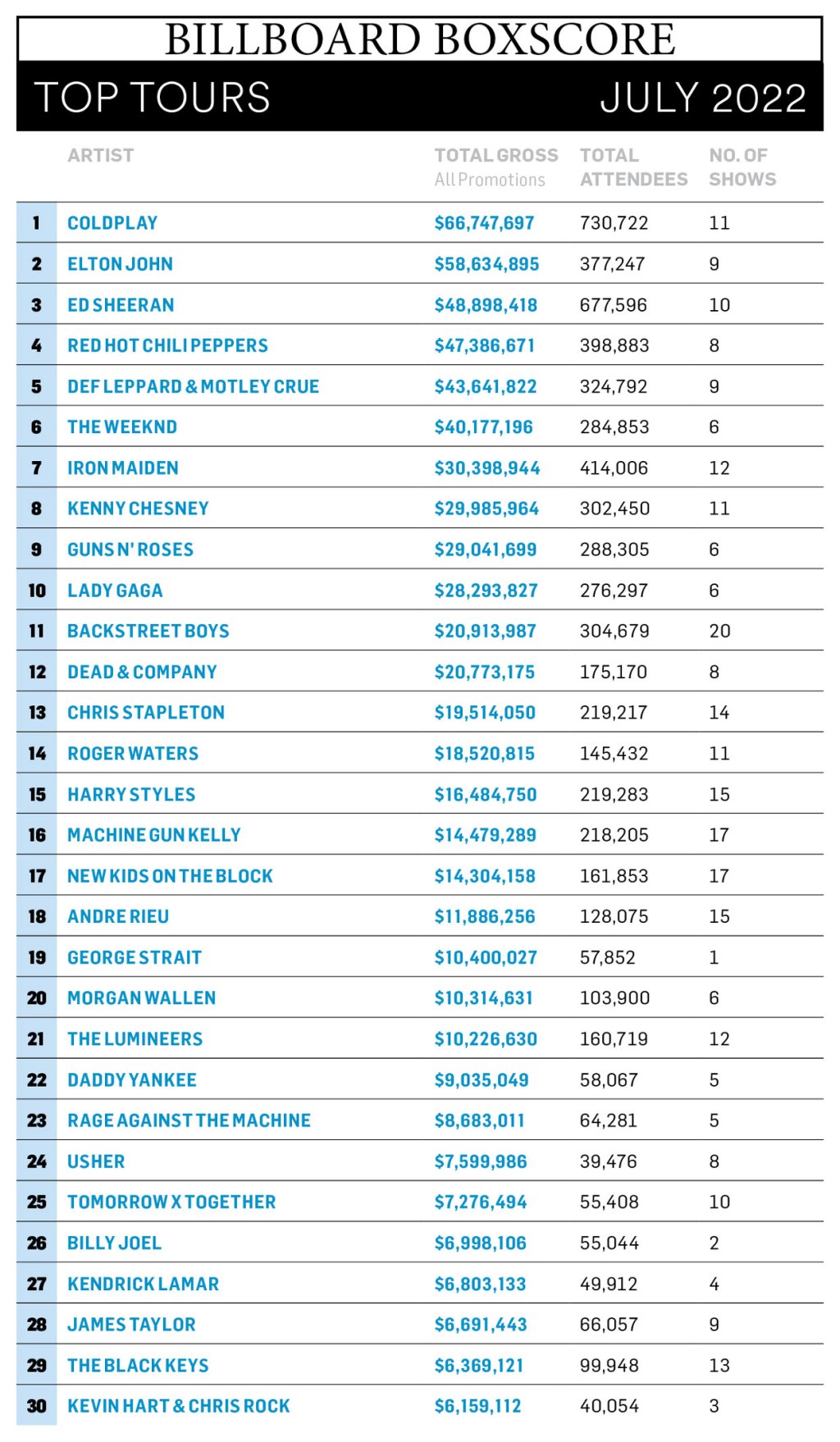 That four-show sweep in Paris earned $28 million and sold 318,000 tickets, netting the No. 1 spot on Top Boxscores. It is followed by Coldplay’s own three-show run at Berlin’s Olympiastadion, grossing $20.4 million. After two Elton John engagements at Nos. 3-4, Coldplay rounds out the top five with three shows at Deutsche Bank Park in Frankfurt, Germany ($13.7 million; 138,000 tickets).

Coldplay averaged a lower ticket price in Europe, pacing $91.34 in July, compared to $107 for domestic shows. Still, Europe’s higher attendance helped generated greater grosses at $6.1 million per night, compared to $5.7 million in the U.S. and $4.1 million in Latin America.

That was, perhaps, to be expected. Both European legs of the A Head Full of Dreams Tour (2016-17) averaged more than $5 million each night, while North and South American shows hovered between $3.4-4.1 million, due to, again, bigger attendance and lower prices in Europe. The same pattern dates to the Mylo Xyloto Tour (2011-12) and Viva la Vida Tour (2008-10).

The Music of the Spheres Tour is up in average gross and attendance domestically and across the pond. In fact, the $6.068 million nightly gross on the European leg (so far – dates continue extended throughout August) is the highest average take on any leg of any Coldplay tour, eclipsing the $6.061 pace of the Asian dates from the A Head Full of Dreams Tour.

Coldplay succeeds Ed Sheeran atop the chart, who similarly led June’s ranking thanks to a streak of European stadium shows (he is No. 3 in July). They are joined by Iron Maiden, Guns N’ Roses and Lady Gaga at Nos. 7, 9 and 10, respectively, filling out half of the month’s top 10 tours with European stadium runs. And show for show, Europe surpasses a 50% share, as Elton John and Red Hot Chili Peppers (Nos. 2 and 4, respectively) split July between Europe and North America.

We noted Coldplay’s persistence as the band bounced around the top 10 over the last handful of months before crowning the Top Tours chart. But no act has been more patient in 2022 than Elton John. He follows Coldplay, making it the sixth month this year at No. 2. To spell out the math of his excruciating run as runner-up, July is the seventh month of the year. He has sat behind Tool (Jan.), Bad Bunny (Feb. and March), BTS (April), Sheeran (June) and now Coldplay.

John has four gold medals to his name, having led Top Tours in February, September and November 2019, as well as January 2020. 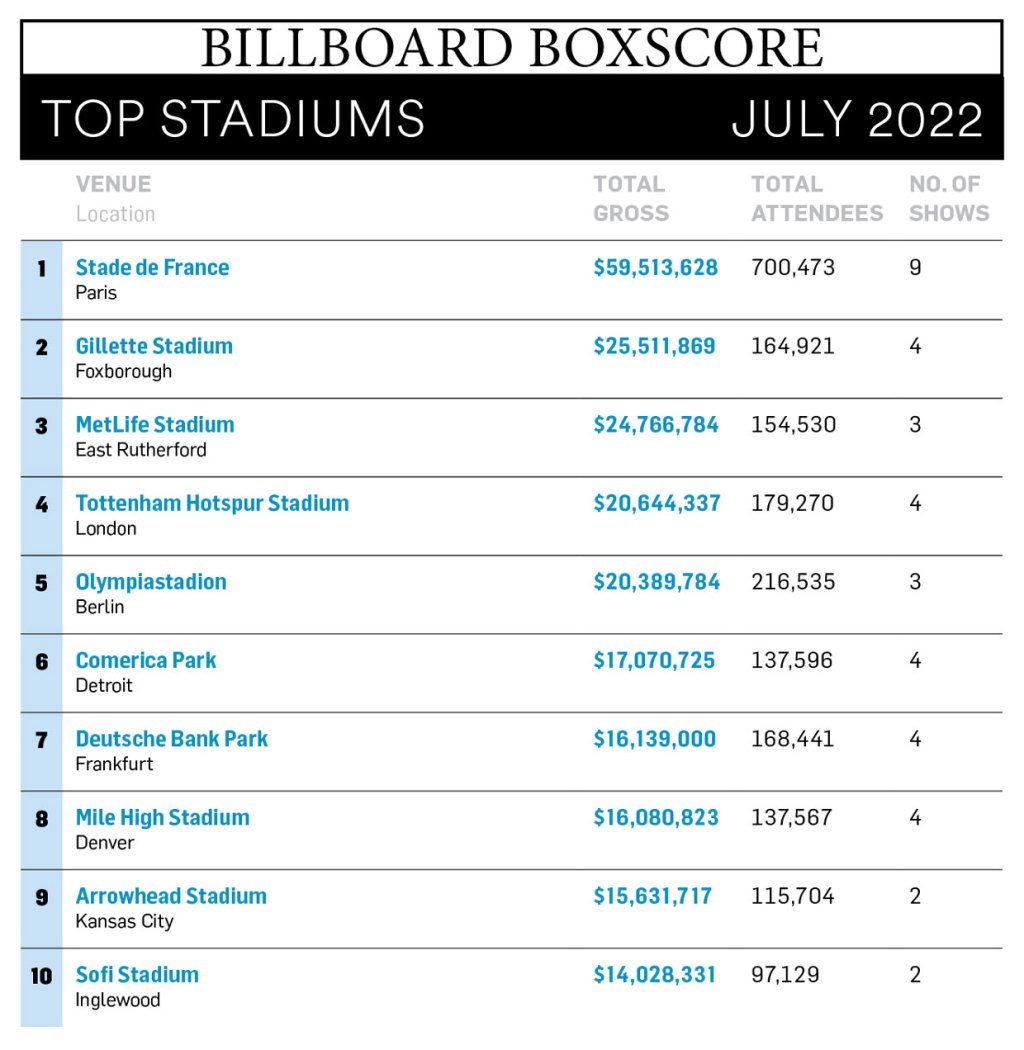 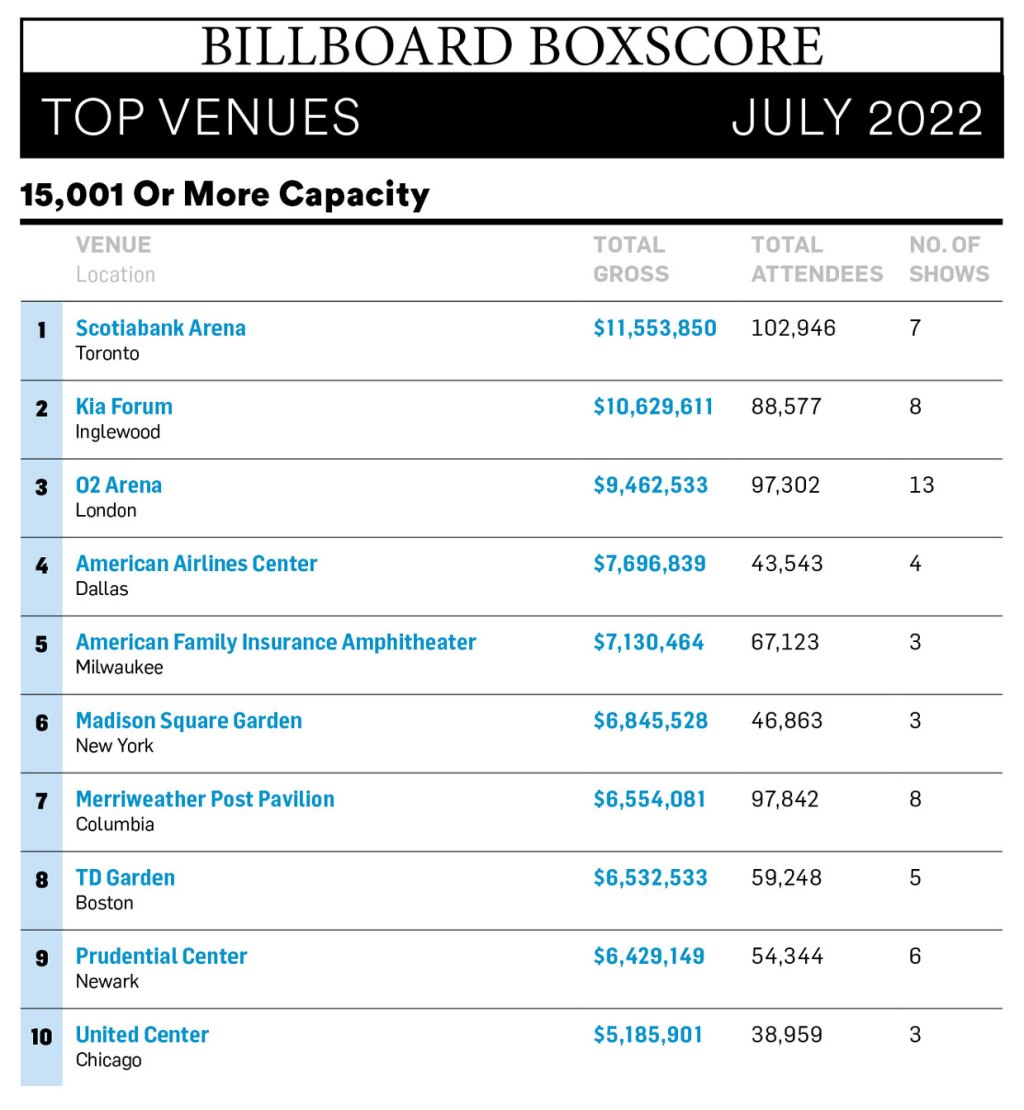 John earned nearly $59 million in July, making it his highest monthly total since the launch of the Farewell Yellow Brick Road Tour in Sept. 2018. Except for his No. 12 rank in May, his monthly earnings have built with each passing month in 2022, from $10.1 million in the cold of January to more than $20 million in February, over $30 million in March and April, breaking the $40 million mark in June, and now approaching $60 million.

Most of John’s sprawling final tour has taken place in arenas around the world. In late May, he skipped to stadiums in Europe and followed with a North American stadium run in mid-July. He earned $16.7 million and $14.9 million with double-headers in Foxborough, Mass. and East Rutherford, N.J., respectively, up 716% and 204% from his last arena plays in the respective areas. 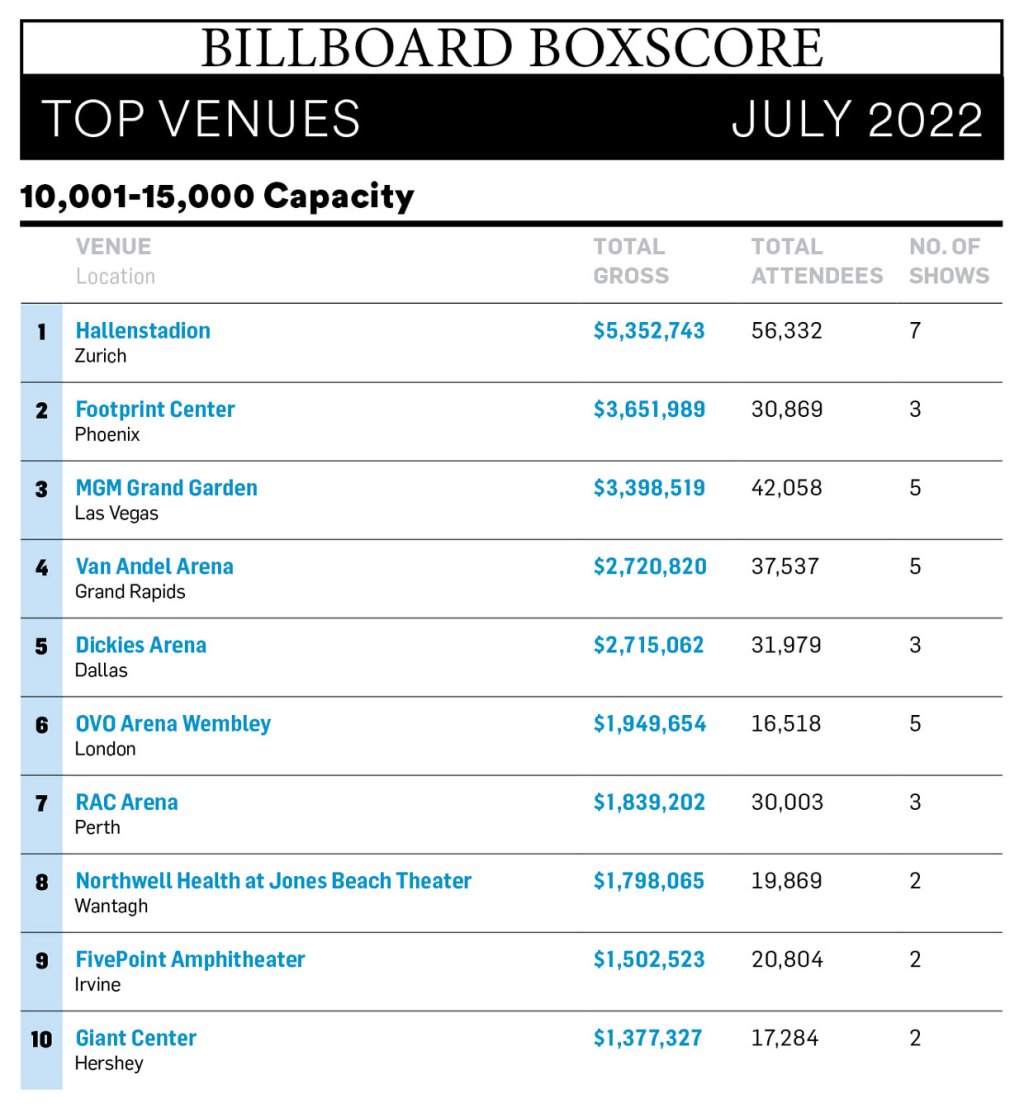 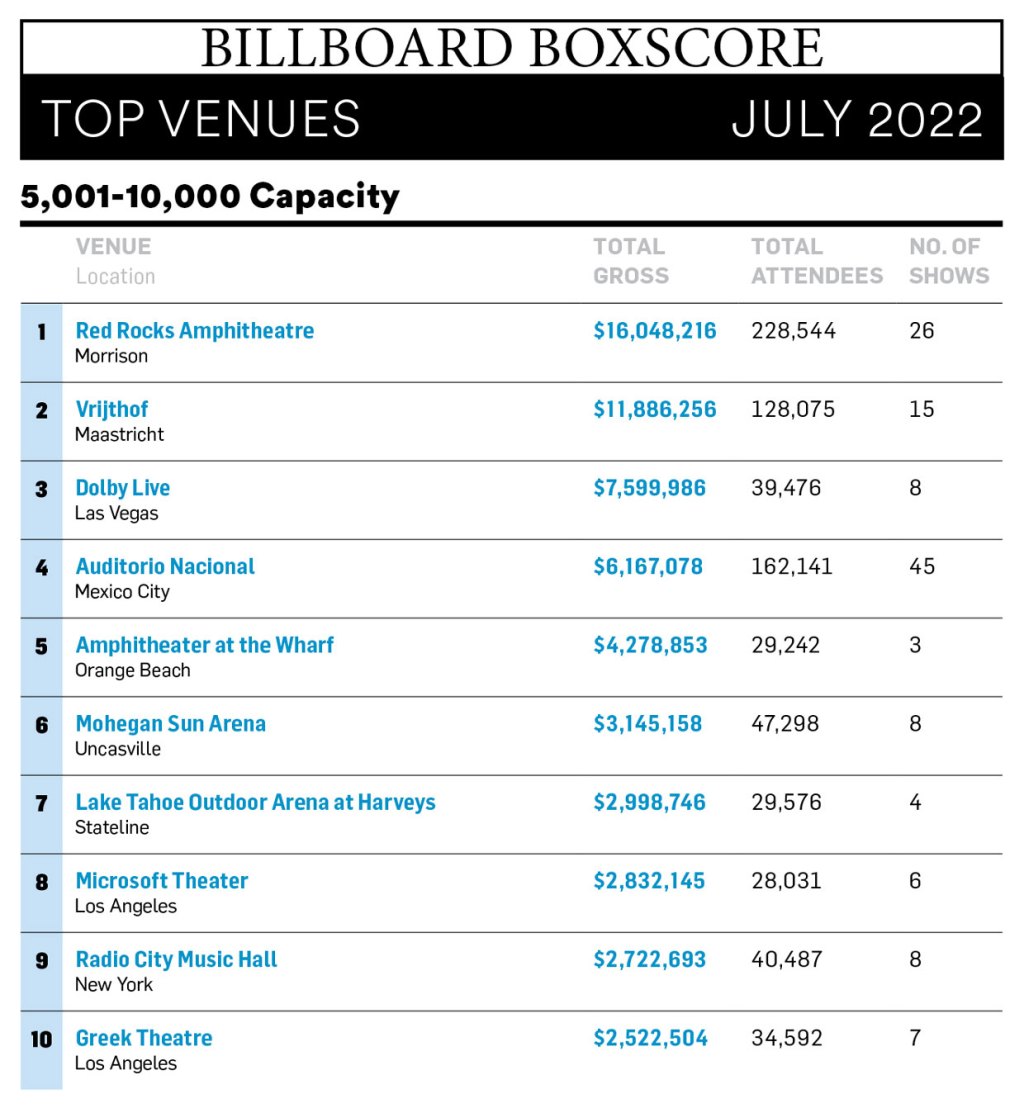 The only act to hit the top 10 of Top Boxscores without a corresponding rank on Top Tours is classical violinist and composer Andre Rieu. He spent all of July in his hometown of Maastricht, Netherlands, playing 15 shows at Vriijthof between July 7-31. Those dates collectively earned $11.9 million and sold 128,000 tickets. It’s a step up from his last hometown residency at the same venue, when he grossed $9.7 million and sold 103,000 tickets from 13 shows.

The summer stadium season rolls on, with bloated grosses throughout the Top Tours chart. Last month, we noted that June set a record of 12 $20 million tours. July matches that tally, and then some. 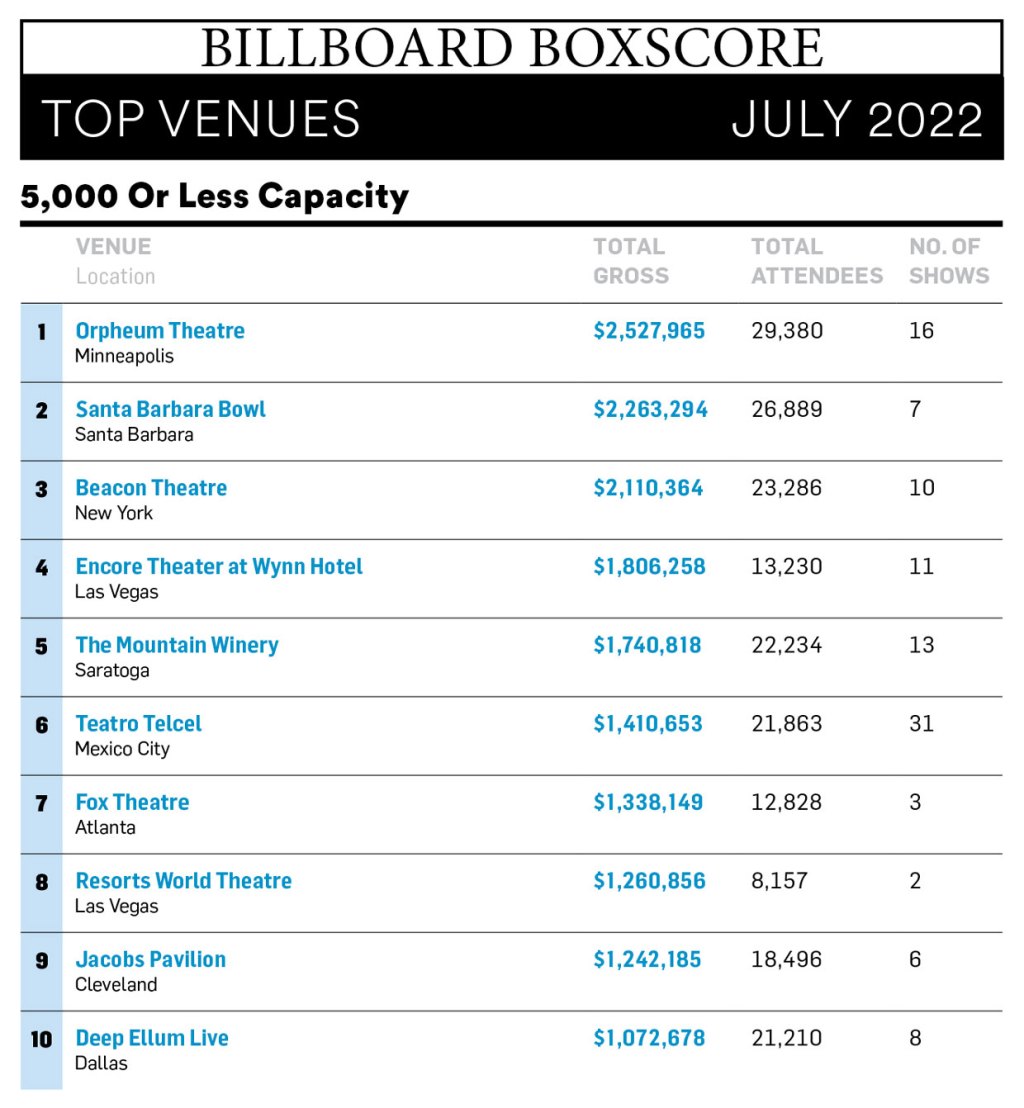 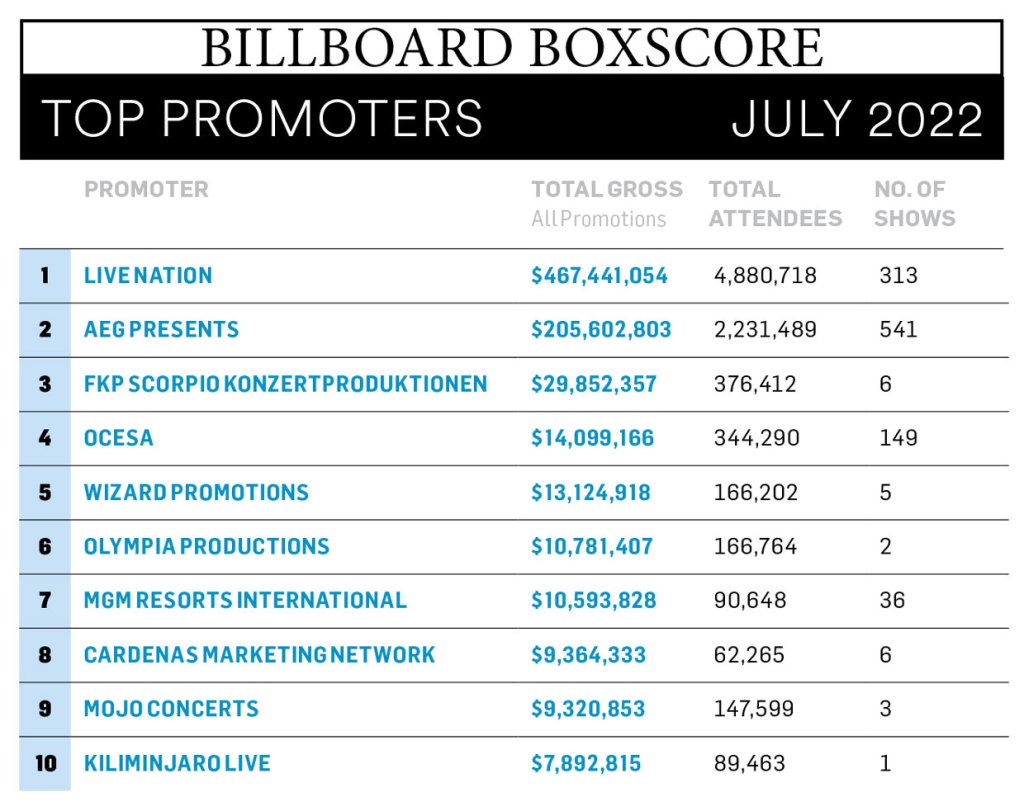 This story originally appeared in the Aug. 27, 2022, issue of Billboard.

How Have Album & Record of the Year Grammy Winners Performed on Billboard’s Charts?