Coldplay has built itself into one of the 21st century’s most powerful touring acts. And after wrapping the North American leg of the Music of the Spheres tour, they have a big old milestone to show for it. According to figures reported to Billboard Boxscore, the British quartet’s total career gross has crossed the $1 billion mark.

Five years after closing out the A Head Full of Dreams tour, the band returned to the stage in support of its ninth studio album, 2021’s Music of the Spheres. The 2022 tour began with 11 shows in Latin America, beginning in San Jose, Costa Rica ($5.7 million at Estadio Nacional de Costa Rica on March 18-19) and finished with a massive run at Mexico City’s Foro Sol, earning $19.5 million over four nights in April. Those four dates alone made Coldplay the No. 5 touring act of April.

It was Coldplay’s June 8 performance at Philadelphia’s Lincoln Financial Field that pushed its career earnings to 10 digits. And after wrapping this week at Tampa’s Raymond James Stadium, the group’s total Boxscore gross stands extremely tall at $1.017 billion and 12 million tickets sold from 456 reported shows. That includes $1.015 billion from headline dates plus their share of a co-headline show with Jay-Z at the Barclays Center on New Year’s Eve 2012.

Coldplay is the fourth British act (alongside Elton John, Paul McCartney and The Rolling Stones), fifth duo or group (Bon Jovi, the Eagles, The Rolling Stones, U2), and 11th artist overall to join the billion-dollar Boxscore club.

The 10-figure total is the result of more than two decades of nearly ceaseless touring. The Parachutes Tour played through 2001, leading into the A Rush of Blood to the Head Tour in 2002-03. After a narrow break, the Brits headed back out for the Twisted Logic Tour from 2005-07 and barely stopped before launching the Viva la Vida Tour from 2008-10 and the Mylo Xyloto Tour from 2011-12. Add a brief stint of underplays for the Ghost Stories Tour in 2014 before the A Head Full of Dreams tour, which delivered 115 performances from 2016-17.

That kind of consistency is bound to build to something big, but Coldplay hasn’t just returned to the same venues with the same setlist – their business sprinted from tour to tour, leading them from clubs at the turn of the century to stadiums in 2022.

The Parachutes tour earned an average of $52,700 from 2,500 tickets each night. Since then, every tour has done better than the last in terms of total gross and attendance. (This does not count 2014’s Ghost Stories Tour, which situated the band in intimate theaters between stadium runs.) 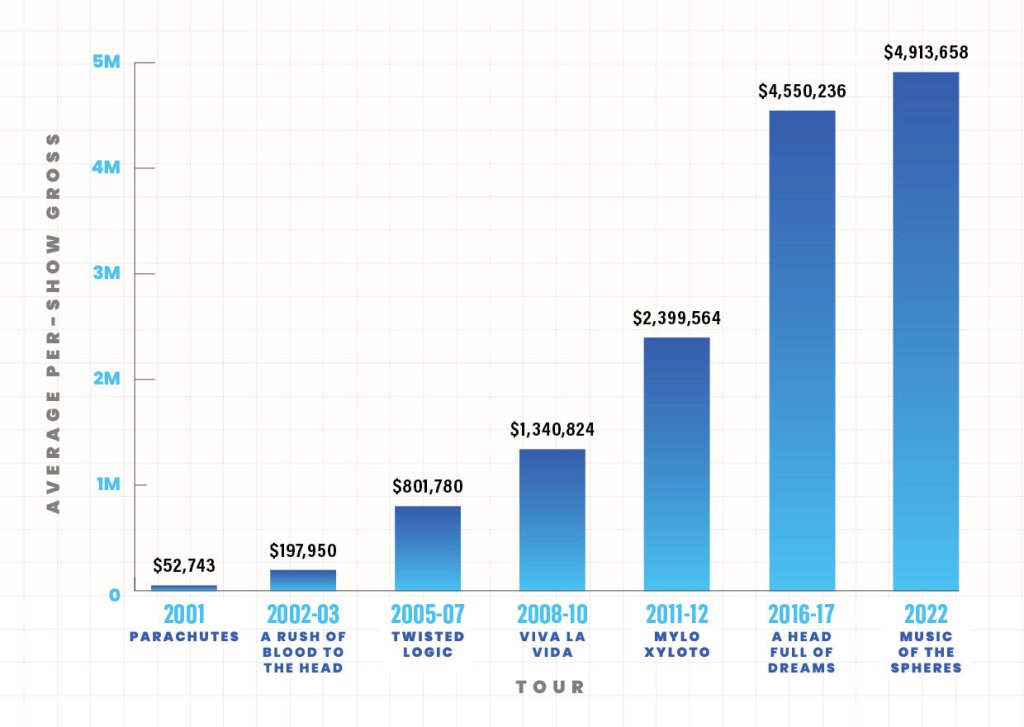 The above graph shows the tour-to-tour increase in per-show revenue on each Coldplay tour over the last 20-plus years. Not only have grosses never gone down, they’ve never even slowly increased. The band’s second and third tours increased by 275% and 305%, respectively, before rising by another 67%, 79% and 90%, respectively. Not until their current tour has business stayed more-or-less the same, but after climbing from clubs to theaters to arenas to stadiums worldwide, there isn’t much distance left to cover unless, like most modern A-list touring acts, they send ticket prices soaring.

But they haven’t! Like any evolving artist, ticket prices have, of course, increased over their touring tenure from the $21 average on their first tour to the $93 average ticket this year. But even though their ticket has quadrupled over two decades, that is a relatively light price for a stadium show in 2022. In fact, despite Ticketmaster Platinum, official re-sale and dynamic pricing, Coldplay’s average price is down 4% from their previous tour, bucking the post-COVID trend of bulked up ticketing. 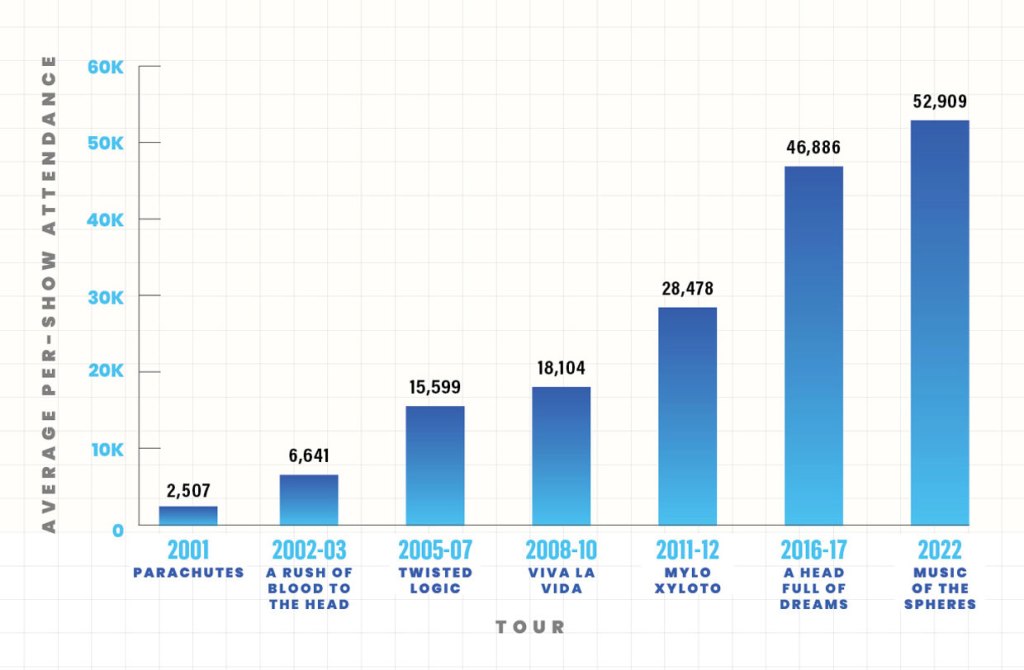 While many established arena and stadium acts plateau in ticket sales due to an inevitable ceiling on sellable capacity, Coldplay has slowly wormed its way toward global domination with incremental expansions – to theaters and scaled-down arenas on A Rush of Blood to the Head, arenas and amphitheaters on Twisted Logic, pushing to stadiums in certain international markets on Viva la Vida and Mylo Xyloto and then to worldwide stadiums by the end of the ‘10s.

The Music of the Spheres tour will resume on July 2 in Germany, with European dates throughout July and August, followed by shows in South America in the fall.

Stormzy Signs With WME In All Areas

SXSW to Launch Australia Festival in 2023

A First for Chencho Corleone: ‘Desesperados’ With Rauw Alejandro Hits No. 1 on Latin Airplay Chart