The first six months of 2022 have lived up to the hype predicted for the concert business, fueled in large part by a more diverse, younger demographic eager to attend live shows and willing to spend more of their money on music and culture.

The leading 10 acts on the 2022 Top Tours chart grossed $722 million at the midyear point, 20% more than the top 10 for 2019’s Top Tours (the last complete year of touring prior to the pandemic), according to the 2022 Billboard Boxscore midyear charts that measure the top line of the live-entertainment industry. This year’s chart shows very healthy consumer demand and attendance, despite the ongoing global presence of COVID-19 and growing concerns about waning immunity among vaccinated people.

While big-ticket goodbye tours from long-standing acts dominated the 2019 midyear chart, a new generation of younger, international names rules the 2022 report: Bad Bunny is the first Spanish-language artist to earn the No. 1 spot on the Top Tours chart. His El Último Tour del Mundo tour and two stand-alone shows in Puerto Rico grossed $123.2 million and sold 645,000 tickets to 37 concerts, according to figures reported to Boxscore — roughly $3.3 million and 17,400 tickets per night.

The Latin superstar isn’t done, either. His 41-date Bad Bunny: World’s Hottest Tour is set to begin Aug. 5 in Orlando, Fla. It will span the United States before heading to the Dominican Republic for two shows at Santo Domingo’s Olympic Stadium. From there, he’ll visit Santiago, Chile, and travel north through South America and Central America before closing with two nights at Estadio Azteca in Mexico City Dec. 9-10.

The stadium tour has the potential to gross between $250 million and $300 million. Combined with the $123.2 million already posted, Bad Bunny has a very strong shot at securing the top spot on Billboard’s year-end Top Tours ranking.

“The demand for Bad Bunny is incredible, especially when you consider how many shows are playing stadiums in 2022,” says Christy Castillo Butcher, senior vp of programming at the newly opened SoFi Stadium and Hollywood Park in Inglewood, Calif. (Bad Bunny will perform there in late September.)

SoFi Stadium also hosted BTS for four shows that generated $33.3 million — while another four at Las Vegas’ Allegiant Stadium generated $35.9 million. In total, BTS has grossed $75.4 million by midyear, earning the group the No. 4 spot on Top Tours. Concurrently, BTS joins Bad Bunny to create history: 2022 marks the first time that two acts that perform in a language other than English made the top five of a midyear or year-end Top Tours chart.

Another exciting milestone in 2022: This is the first time that half of the acts on Top Tours are not yet 30 years old (Bad Bunny, BTS, Billie Eilish, Morgan Wallen and Justin Bieber) and that four of the other five acts are led by frontmen over 60. Elton John, Mick Jagger of The Rolling Stones and Don Henley from the Eagles are all over 70. Trans-Siberian Orchestra founding singer John Oliva is 62 and co-founder Al Pitrelli turns 60 in September.

Rocky Road Still Ahead: While consumer spending on live events has yielded optimism, the problems that many foresaw in advance have materialized. One issue is that far too many shows are fighting for dollars in major markets with not enough people to staff the concerts. At the same time, surging gas prices are hitting both tour transportation costs and consumer spending.

There are also challenges facing the industry that no one predicted, including no-shows at events from fans who have already purchased tickets and the way the Russia-Ukraine conflict has halted the concert business’ push east through Europe.

While the Boxscore charts don’t measure or address these systemic problems, they provide a fairly reliable view of momentum in the touring industry. It’s a rear-facing, unaudited view that skews heavily in favor of major cities and well-established artists, but comparing midyear results with those from 2020 shows some reasons for optimism.

Live Nation: Bigger, Richer and At a Crossroads: The biggest winner of the midyear Boxscore is Live Nation: The company spent much of 2021 preparing tours for the busy 2022 season, delivering the big concert grosses that it had been promising investors while working under a reorganized management structure that has brought more focus to the company’s Beverly Hills, Calif., office.

Live Nation’s share price is hovering around $90, down from a high of about $125 per share when chief executive Michael Rapino and other executives cashed out some of their expiring stock options, but still 20% higher than the pre-pandemic period. Its show count and attendance are up, according to its quarterly financial report (though its Boxscore numbers are down because it has curbed how much information it shares with Billboard), and its market share is as strong, if not stronger, than it was in 2019.

Still, Rapino isn’t taking a victory lap. Instead, he has reduced his visibility and worked mostly behind the scenes amid the fallout from the Astroworld Festival, where 10 fans died due to crowd surges. The tragedy presents both a major reputational and financial threat to the company, though Live Nation officials believe they have enough insurance to cover most of the costs. 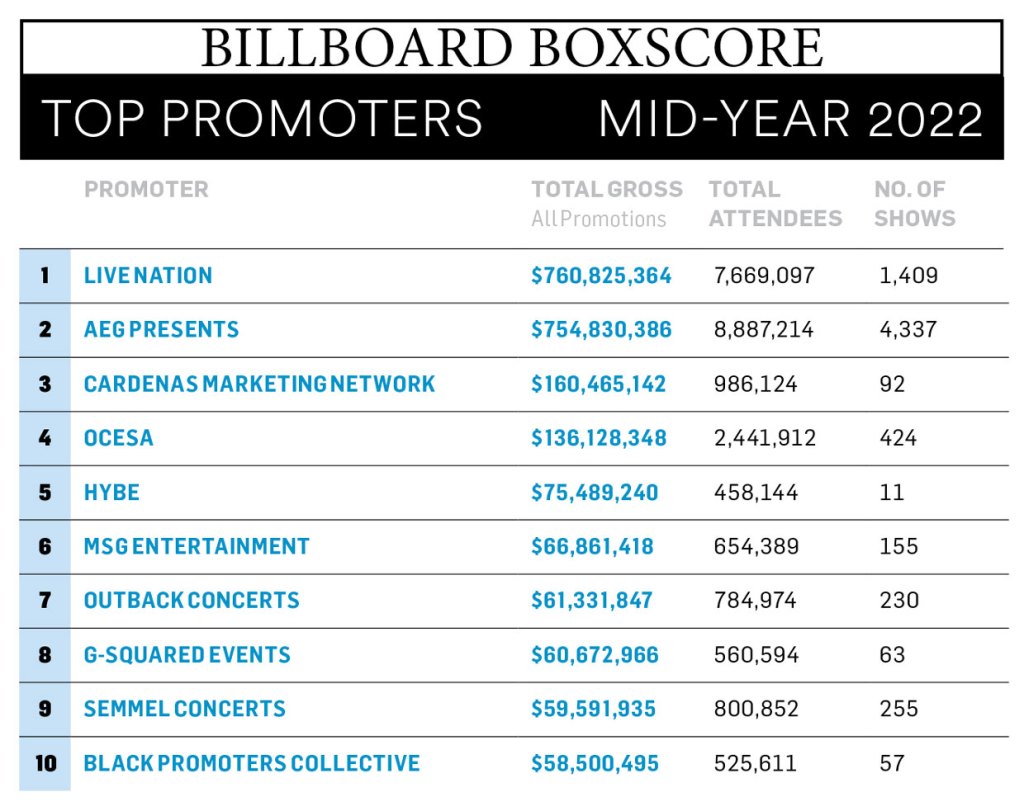 The company has had a tricky time getting its messaging right in the aftermath of the tragedy, however: Nearly all of the data shows that increased prices are driving live music’s comeback to the top level and that ticket prices will likely keep climbing due to the rising costs of labor and production. More importantly, prices are going up because there is a greater demand for the tickets from fans.

That’s a difficult sell to consumers when the country appears to be entering a recession, but there are early signs in the market that there is plenty of demand in the lower price range, especially at amphitheaters. Tickets for superstar artists like Keith Urban are as cheap as $30 per person at the MidFlorida Credit Union Amphitheatre in Tampa, Fla.

But even as the company works to reduce prices, it still charges customers a premium on the back end — fees for its lowest-priced tickets in Tampa include an $11.40 ticket fee and $5 order fee, which is good for a fee increase of 50% over face value. As fans continue attending concerts and become more sophisticated consumers, the bait-and-switch at the checkout stand is only going to push away more buyers. 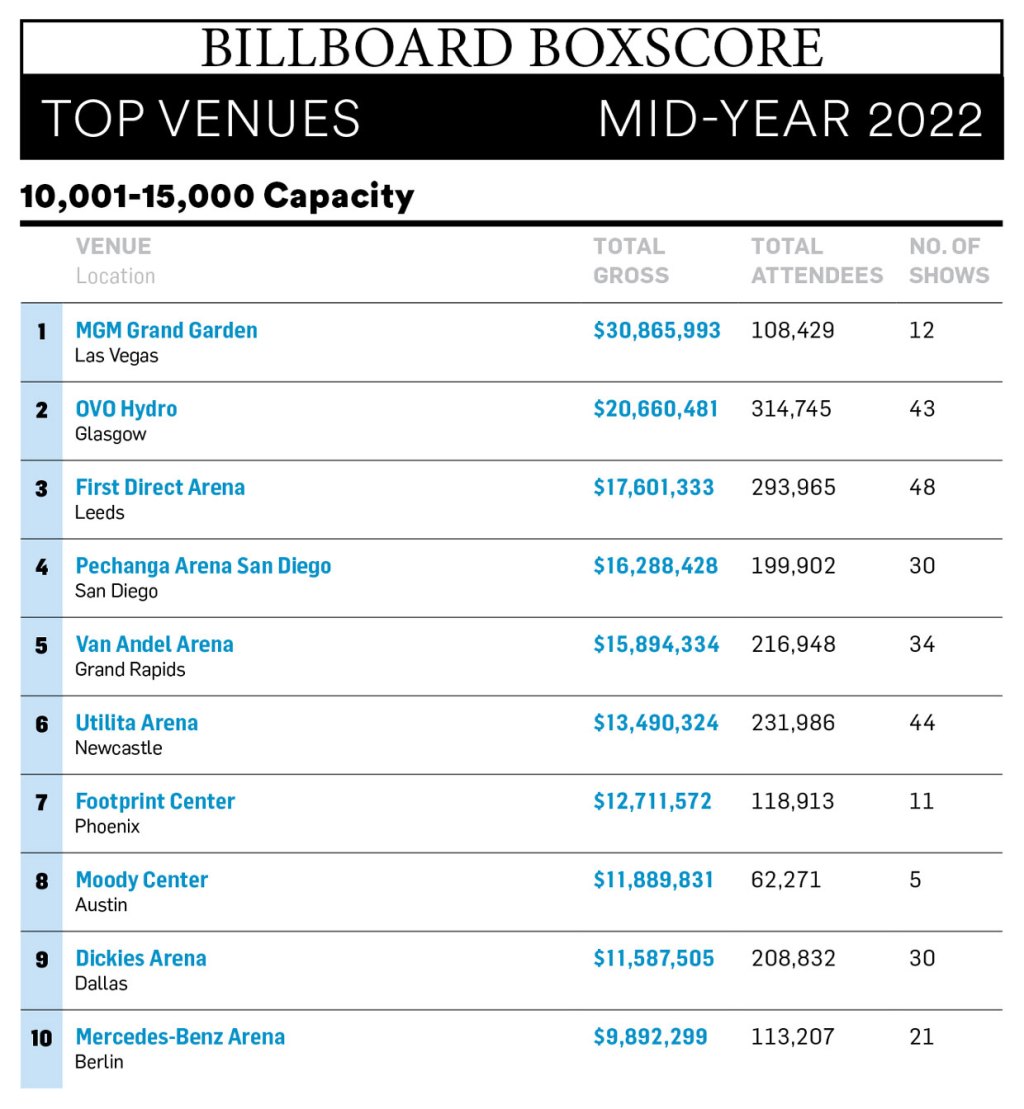 Las Vegas Stays Strong: As expected, the major live markets on the Boxscore charts all performed, but Las Vegas was the only city to be featured in all four venue lists based on size category.

“Coming out of the pandemic, people were wanting to get away, and Las Vegas was an easy choice because we are only a one- to three-hour flight max for half the country, and we started preparing for the return of live music earlier than many other cities,” says Bobby Reynolds, senior vp of AEG Presents Las Vegas. 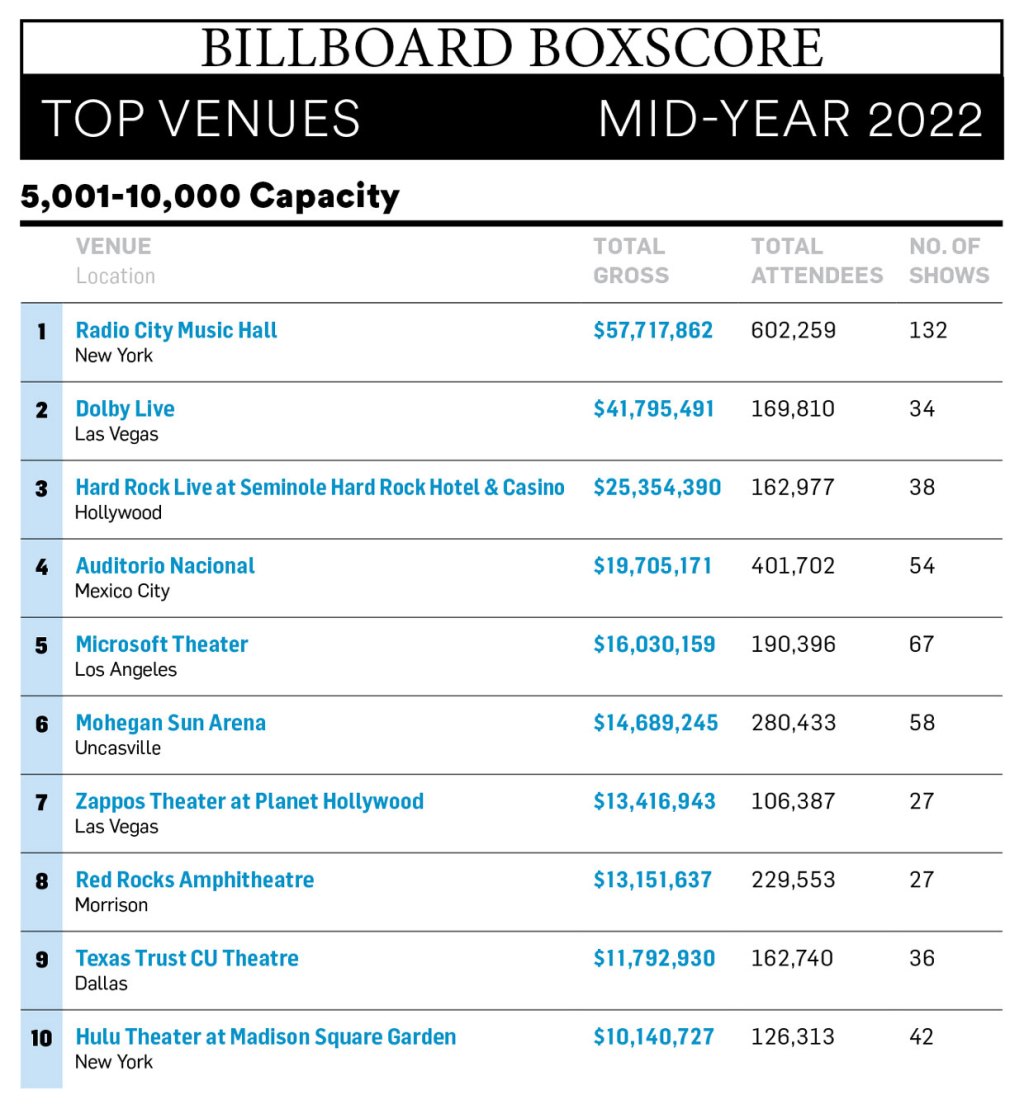 The MGM Grand Garden Arena topped the 10,001- to 15,000-capacity chart, while Las Vegas’ Dolby Live (previously known as Park MGM Theater) earned second place on the 5,001- to 10,000-capacity chart and Zappos Theater at Planet Hollywood grabbed the No. 7 spot.

The brand-new Resorts World Theatre earned the top slot on the 5,000 or less capacity chart, followed by The Colosseum at Caesars Palace in second. 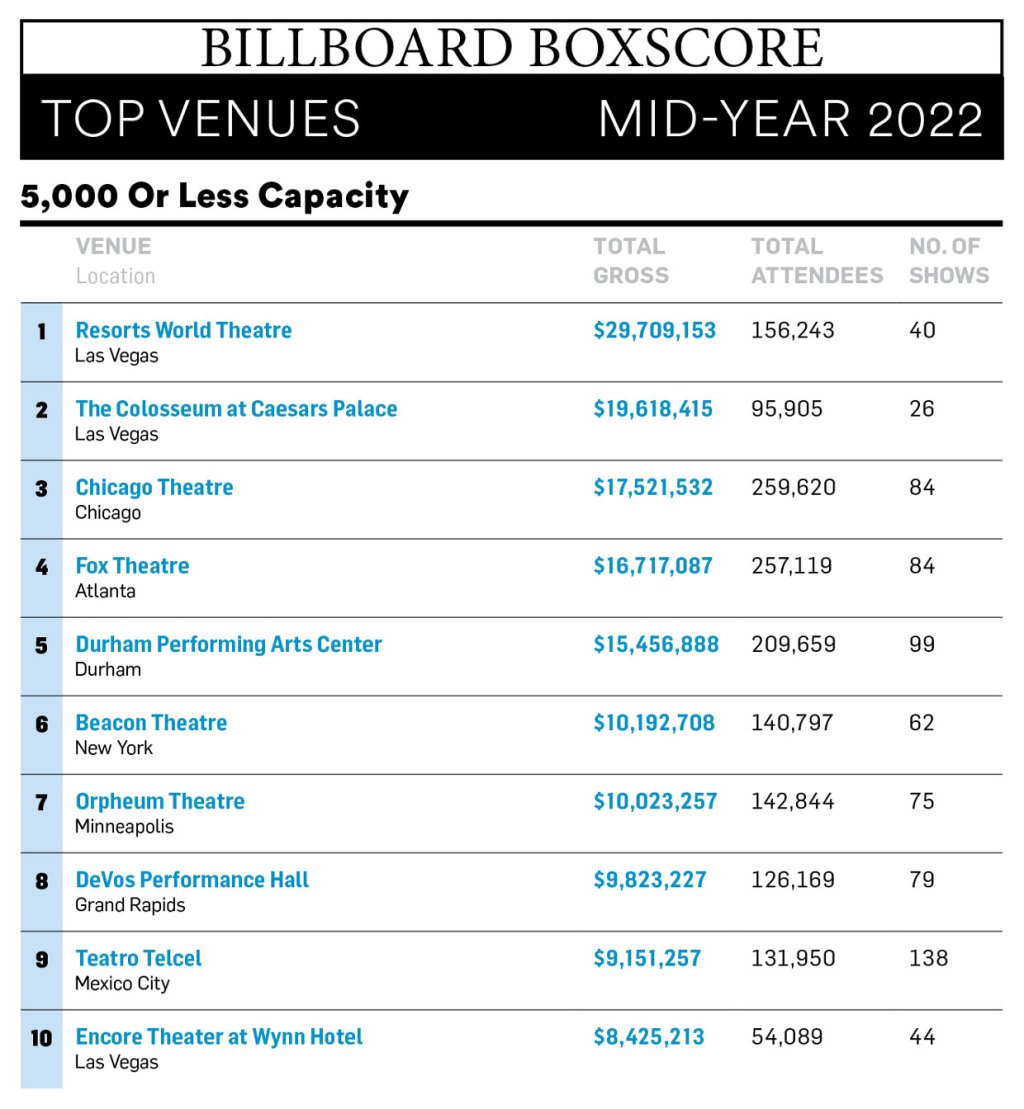 This story originally appeared in the June 4, 2022, issue of Billboard.

La Maquinaria Norteña Earns First No. 1 at Radio Thanks to ‘50 y Cincuenta’