After record-low grosses in January, a wave of new arena tours steered the live-music industry back on course in February. Bad Bunny led the way, earning both the month’s No. 1 Tour and Boxscore: According to figures reported to Billboard Boxscore, the Puerto Rican star’s El Ultimo Tour del Mundo trek – named after his November 2020 studio album — earned $39.8 million and sold 183,000 tickets.

At nearly $40 million, Bad Bunny scores the biggest one-month gross in arenas since Billboard began its monthly Boxscore recaps in February 2019, with the lone exception of Trans-Siberian Orchestra. The perennial holiday-rock favorite tours with the advantage of two separate ensembles on either coast, doubling up to $46.8 million in December 2019 and $42 million two years later. The Rolling Stones hold the all-time monthly record with $95 million in North American stadiums in August 2019.

Bad Bunny is the first Spanish-language act to rule either chart, following BTS among all non-English-language artists. The South Korean septet was No. 1 on Top Tours in May 2019 ($51.7 million) and on Top Boxscores in November and December of 2021 with more than $16 million each month from their four-night run at SoFi Stadium. 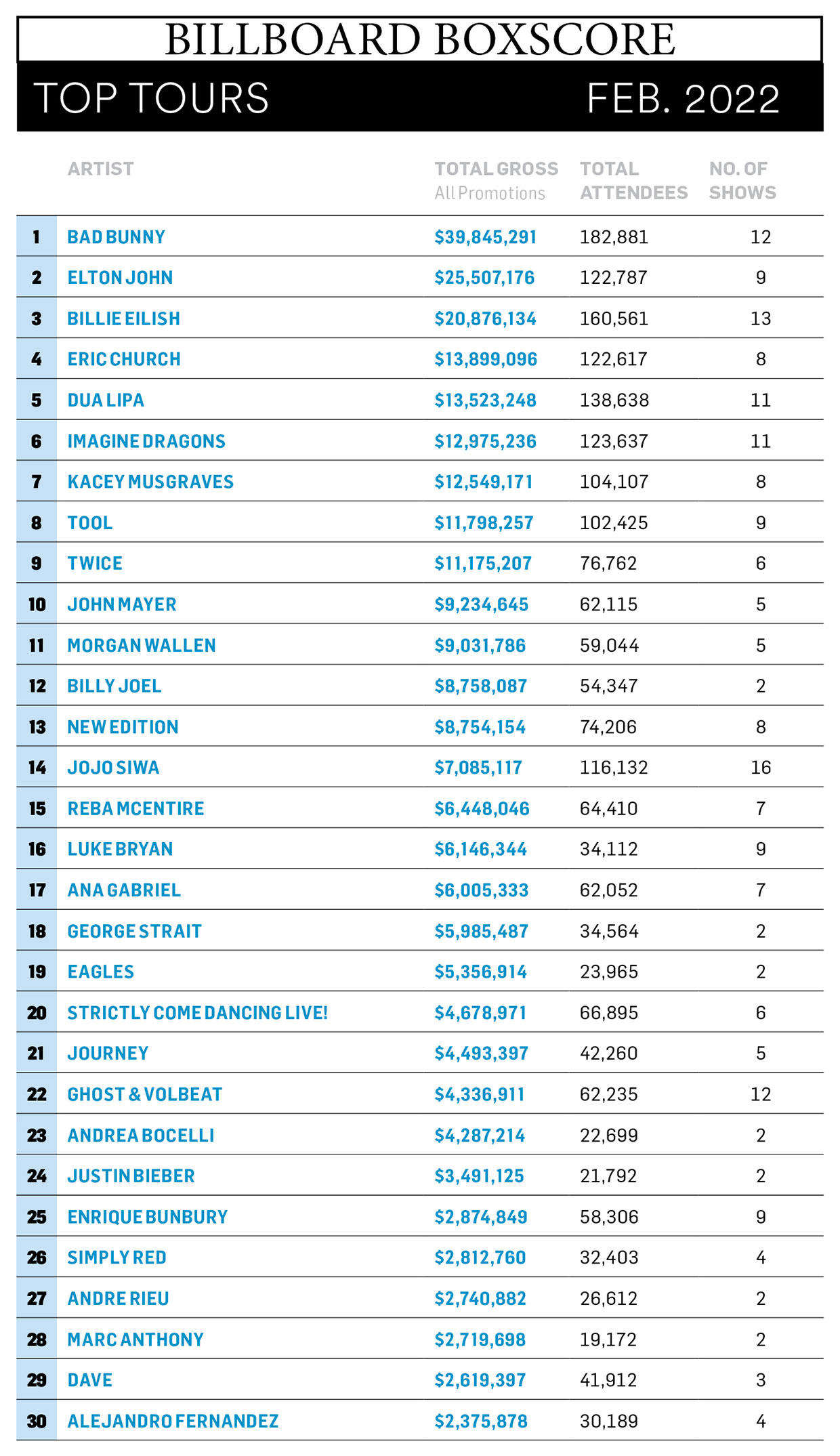 With an average of $3.3 million and 15,240 tickets per show, Bad Bunny sets a blistering pace for the year ahead, led by two shows on Feb. 25-26 at The Forum in Inglewood, Calif. The two-night stint rules the Top Boxscores chart with $9.6 million, or $4.8 million each night, setting a new high as the venue’s top per-show earnings, surpassing the Eagles’ previous record of $3 million. The dates help make The Forum the second-highest grossing venue of the month.

Bad Bunny broke the same per-show record in Dallas, Denver, and San Diego and, in terms of total gross, in the Texas cities of El Paso and Hidalgo and in Portland, Ore., securing local records in seven of the nine cities he played in February. These shows litter the full Top Boxscores chart at Nos. 1, 3, 8, 15-17, 20 and 26.

Elton John takes the No. 2 spot on Top Tours with $25.5 million in just nine shows. That includes one show at the Hard Rock Live at Seminole Hard Rock Hotel & Casino in Hollywood, Fla., that is not billed as part of the Farewell Yellow Brick Road Tour, but a one-off date as Elton John & His Band.

February marks John’s second consecutive month at No. 2. In total, it’s his 13th appearance in the top 10 of Top Tours, including four months at No. 1 (February, September, November 2019 and January 2020). Among the highest grossing acts in Boxscore history, John continues the Farewell Yellow Brick Road Tour with dates scheduled through July 2023.

In contrast to John’s long-running farewell tour, a slew of new tours crash the chart’s inner circle. Billie Eilish, Dua Lipa and Kacey Musgraves hit Nos. 3, 5 and 7, respectfully, each artist headlining their first full arena trek. In a field often dominated by the men of classic rock, these women fuse dance, alternative and country music into bulletproof arena-pop to the tune of a combined $46.9 million and more than 400,000 tickets sold over the month. 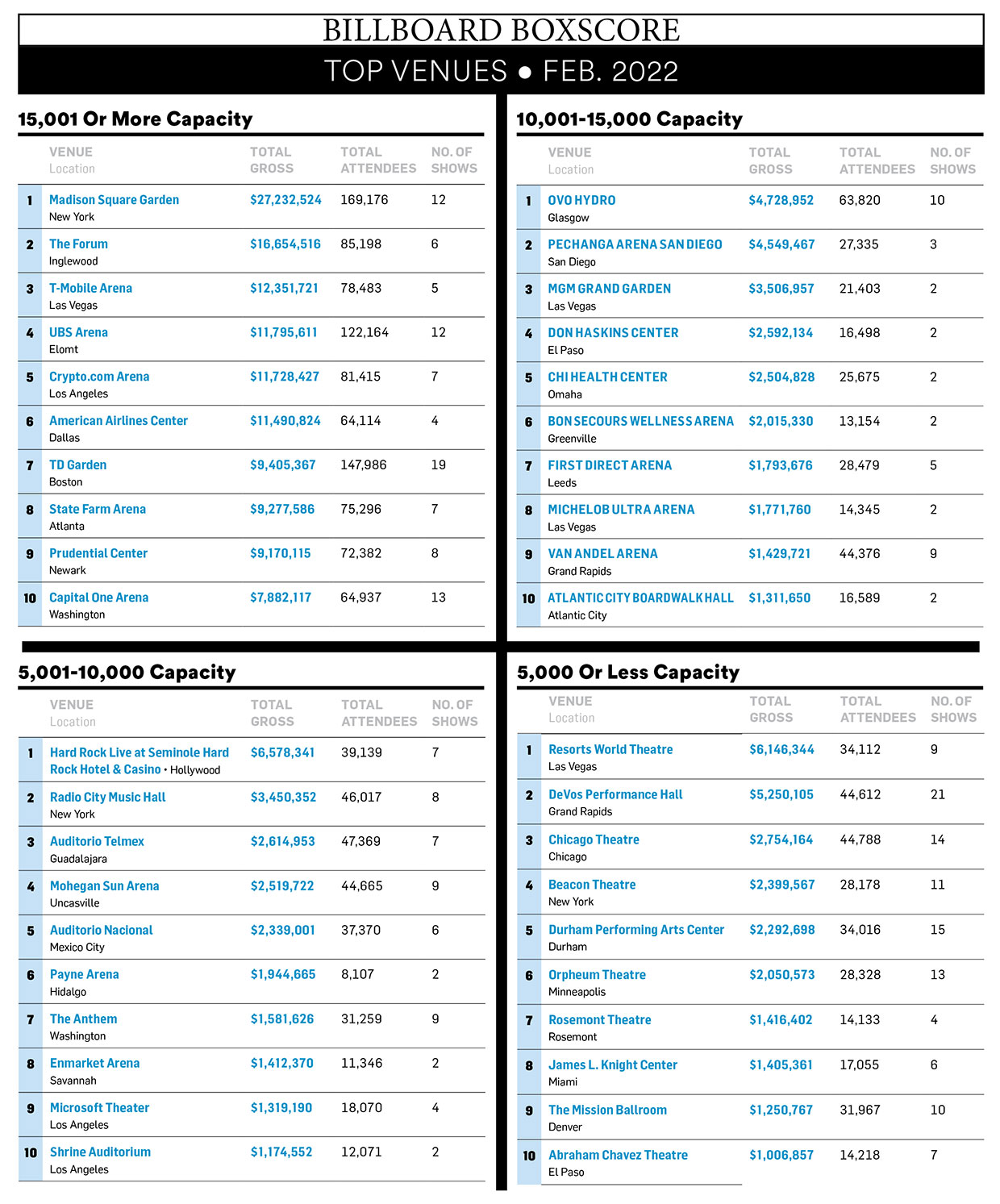 Helping to usher in the return of international music festivals, Mexico City’s Electric Daisy Carnival is No. 2 on Top Boxscores. The three-day event drummed up $9.5 million from a weekend-long attendance tally of 231,000, helping push local promoter OCESA to No. 4 on the Top Promoters chart. The company put on 69 events throughout February, combining to $18.2 million and 401,000 tickets sold.

Just above them, U.S.-based Latin promoter Cadenas Marketing Network is No. 3 with $50.7 million, thanks in large part to Bad Bunny’s buffo box office, plus shows by Ana Gabriel, Marc Anthony and Nicky Jam. Topping the list are mainstays Live Nation and AEG Presents, both grossing more than $100 million for the first month since October.

G-Squared Events and Black Promoters Collective round out the top 5 in a tie for No. 5 with $9.1 million and 78,100 tickets sold. The two companies co-promoted eight shows by New Edition (No. 13 Top Tours) and one for Patti LaBelle. 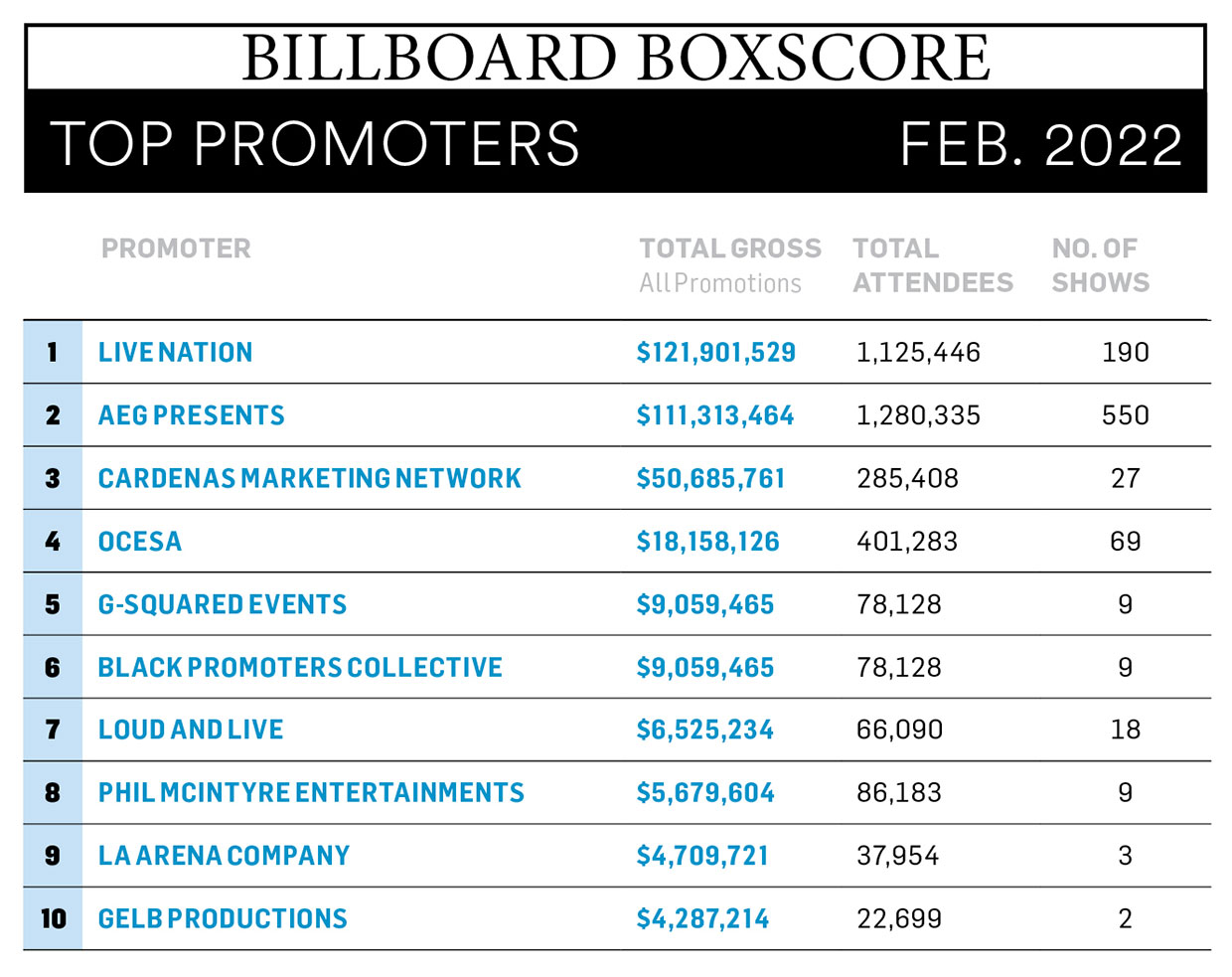 Songwriters Charge New Fees to Survive — But Asking Is Risky

For King & Country Notches 11th Christian Airplay No. 1 With ‘For God Is With Us’