On April 14, 1970, Creedence Clearwater Revival—fresh off of three top 10 albums on the Billboard 200 in less than a year—stepped onto the stage of London’s Royal Albert Hall for the first of two shows.

Now, more than 52 years later, that concert by the revered rock band is being released in its entirety for the first time on Concord’s Craft Recordings on Sept. 16.

The release serves as the audio companion to the Jeff Bridges-narrated documentary, Travelin’ Band: Creedence Clearwater Revival at the Royal Albert Hall, which will be released on the same day. The movie, directed by Bob Smeaton, follows the band from its El Cerrito, California-roots in the mid-to-late ‘60s through the Royal Albert Hall show.

Panic! At the Disco Gets Vulnerable on New Song 'Don't Let the Light Go Out': Watch

Creedence Clearwater Revival at the Royal Albert Hall features the classic CCR line-up of John Fogerty, Tom Fogerty, Doug Clifford and Stu Cook. By the next year, Tom Fogerty had left the band and in 1972, the group disbanded. The full 12-song performance includes such classics as “Fortunate Son,” “Proud Mary” and “Bad Moon Rising,” which premieres below.

Creedence Clearwater Revival at the Royal Albert Hall will be available on 180-gram vinyl, CD, and cassette tape, while Walmart will offer a gray “Tombstone Shadow” vinyl and Target a “Green River” vinyl. Additionally, the album will be available across digital platforms, including in hi-res and Dolby ATMOS immersive audio formats. Pre-orders are open now.

Helming the release is producer Giles Martin and engineer Sam Okell, who previously worked on the Beatles’ 50th-anniversary editions of Abbey Road and Sgt. Pepper’s Lonely Hearts Club Band, among other projects. The music was restored and remixed from the original multi-track tapes. Engineer Miles Showell mastered the set at Abbey Road Studios.

Rumors of the recording existed for decades—and, according to CCR lore—Fantasy Records released a supposed live album from the Royal Albert Hall concert in 1980, but it was quickly discovered that the released recording was actually from a 1970 show at Oakland, California’s Oakland-Alameda County Coliseum Arena and the master tape had been mislabeled. The album was re-issued simply as The Concert. 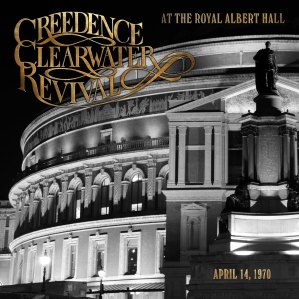 Two months after the initial releases, Craft will put out a Super Deluxe Edition Box Set, a 2-LP/2-CD/1-Blu-ray collection, which includes the concert on 180-gram vinyl and CD, as well as a second CD with additional music from the film. The Blu-Ray offers the full film and the album in hi-resolution and Dolby Atmos. The set, which includes other extras, is capped at 5,000 copies worldwide.