The forthcoming Universal Hip Hop Museum (UHHM) is getting off on the right foot with an exhibit called the “[R]Evolution of Hip Hop,” focusing on the genre’s golden age. The years between 1986 and 1990 are celebrated in the immersive experience — situated at The Bronx Terminal Market in New York City, across the street from the museum’s location — and patrons are treated to a sneak preview of what’s to come.

Rocky Bucano — chairman of the board and president of UHHM — is running the show with the exhibit he explains is the first step in the bigger grand opening of the 52,000-square-foot museum in 2024. The “[R]Evolution of Hip Hop” brings guests into an era that saw the culture blossom with acts such as Run DMC, Biz Markie, Eric B & Rakim, Kool Moe Dee and more help evolve a movement that would become the most popular genre in the country today.

“Sitting on the sidelines and watching all these other museums built, like the Rock & Roll Hall of Fame, the Museum of Pop Culture — I couldn’t sit by and see hip-hop, which is so important to so many people around the world, not have a home,” Bucano tells Billboard. “We’re providing visitors with a sneak preview of what we’re doing with the museum that opens in 2024 — and for me personally, the responsibility of making sure that we have a space to amplify and magnify and inform people all around the world about what hip-hop actually is, is so important.”

The exhibit features all sorts of artifacts from concert posters, plaques, all-access passes, original cassette tapes, outfits and more for fans to indulge in before getting to experience the actual museum. Bucano and his team have been planning this endeavor for over 12 years, and the exhibit is opening the door to a project that involves not only the museum but also the metaverse and satellite spaces in countries such as England and Japan. 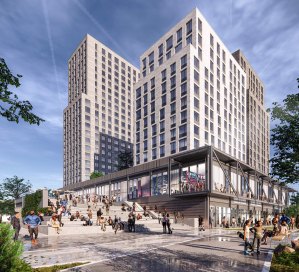 All this is intended to build excitement for the opening of the UHHM, and Bucano along with his team couldn’t be anymore happier to see the project go from a concept to a real life thing — one that they want to last for hundreds of years.

“Our plan for right now is to continue operating the exhibit at the Bronx Terminal Market, launch our virtual reality museum that we can’t wait for people to see, have our grand opening in 2024 — and then a few years after that, explore different cities and countries to open satellite spaces that represent the Universal Hip Hop Museum.”

The construction of the museum building itself is also right on schedule. According to Bucano, the bricks are falling right into place with the building as the exterior is already completed. He and his team are waiting for L+M Development Partners to begin constructing the 542 apartment units that will sit on top of the museum as part of the Bronx Point project.

“It’s amazing, because it’s not just placing people in the units,” Bucano says. “It’s actually bringing people from the community and giving them affordable housing to live in. Once the apartments are completed, we can begin developing the interior, which will be sometime late next year. It will take us about a year to complete it, so our scheduled open is the end of 2024 and everything is right on schedule.”

The Universal Hip Hop Museum rollout couldn’t come at a better time. On August 11, 2023, hip-hop will officially turn 50 — and countless celebrations are planned to ring in the genre’s half-century journey around the sun. People can rest assured that the UHHM will be in the middle of it all.

“We like to say we’re the arbiters of the culture’s past, present and future,” Bucano adds. “We are the official record of hip-hop, and being that hip-hop continues to make history, the Universal Hip Hop Museum will be one of the most important museums in the entire world.”

He continues: “DMC of Run DMC said to me the other day, ‘You don’t realize what you created. This is beautiful. This is our home; this is our place. We don’t have to worry about having another museum or institution or school to tell us how to document and celebrate our own culture. We have our own place now.'”