The Weeknd is hitting the blockchain. To celebrate “Blinding Lights” becoming the No. 1 song on Billboard’s Greatest Songs of All Time Hot 100 Chart and earning the distinction of being the all-time No. 1 song on the Hot 100 with 90 weeks, the artist born Abel Tesfaye and Billboard are releasing a series of NFTs featuring The Weeknd for auction on Monday, Dec. 20.

The 7-piece animated NFT collection includes four designs: a 1-of-1 NFT featuring The Weeknd’s November 2021 Billboard cover — which announced his Hot 100 achievement — as well as three trading cards inspired by the music video for “Blinding Lights.” Each one is signed by The Weeknd.

“Through this collection, we’re excited to offer music fans a new, innovative format that allows them to engage further with our rankings and deepen their connection to an important milestone in music history,” Julian Holguin, president of Billboard, said in a statement. “The Weeknd’s NFTs capture the excitement that ‘Blinding Lights’ inspires, and music fans and collectors alike will gravitate towards these NFTs and be proud to own them for years to come.”

The collection was created in partnership with Tom Brady’s NFT platform, Autograph, as well as popular NFT marketplace OpenSea, and Karvin Cheung, a Billboard collaborator, trading card veteran and founder of The Infinite. The NFTs go up for auction Dec. 20 at 5 p.m. ET on OpenSea; the auction ends Dec. 23 at 1 p.m. ET. Bids will be accepted in ETH. The Weeknd’s NFT collection is also available to view on Autograph; the singer-songwriter joined Autograph’s board of directors in the fall, and is helping launch its music vertical with his NFT collection. 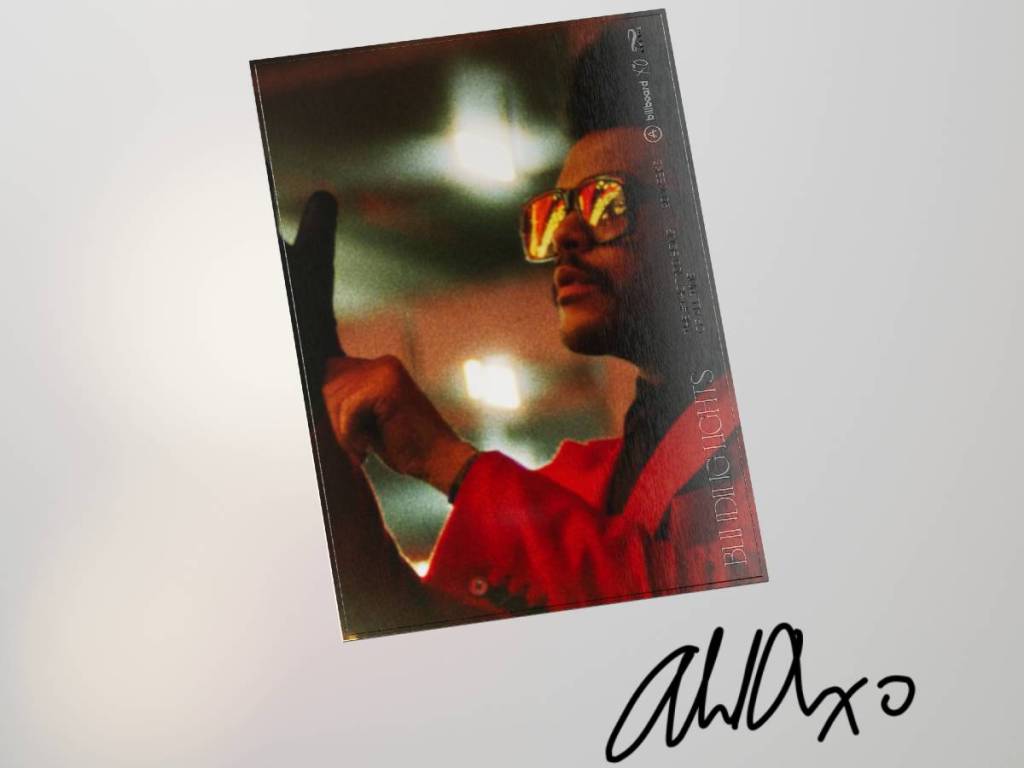 Ahead of the NFT collection, The Weeknd and Billboard also marked the award-winning artist’s Hot 100 achievement with a “Blinding Lights” trading card collection featuring five different designs by Cheung. “It’s always been a dream of mine to create trading cards for the music industry, especially cards celebrating some of the world’s most renowned artists,” Cheung said at the time. “I’m thrilled to have the opportunity to collaborate with Billboard to highlight The Weeknd’s milestone, which will undoubtedly play a role in defining the future of music.” The card packs, which launched Nov. 23, are available on shop.theweeknd.com.

Besides the “Blinding Lights” NFTs and cards, The Weeknd — who was named Billboard‘s No. 5 Greatest Pop Star of 2021 — is keeping busy with his musical endeavors. “Tears In the Club,” his collaboration with FKA Twigs, arrived on Thursday (Dec. 16). Hours later on Dec. 17, “Poison” — his collaboration with Aaliyah for her upcoming posthumous album — made its debut.

The Weeknd has also been teasing that he’s got new music of his own coming up. During an October episode of his Apple Music 1 radio show Memento Mori, he revealed that his next album is done. Teased the artist: “Only thing that’s missing is a couple of characters who are key to the narrative — some people that are near and dear to me, some people that inspired my life as a child and some that inspire me now.”

A release date has not yet been announced for the follow-up to After Hours.