The three men gathered this sunny Memorial Day afternoon on a patio in Los Angeles could not, in some ways, be more different. Steve Angello, 32, rose to fame as one-third of the DJ supergroup Swedish House Mafia. Martin Garrix, 19, achieved viral stardom with “Animals” (now well past half a billion YouTube spins and counting). And Scooter Braun, 33, is the impresario famous for chaperoning the careers of Justin Bieber and Ariana Grande. But Braun, as part of an ambitious foray into the dance-music business, is now also managing Angello and Garrix — and together, the three represent nothing less than a redefinition of success in EDM, emphasizing original music and brand-name, pop-style superstardom. (See also: Bieber hopping onstage at Ultra in March to perform “Where Are U Now,” Skrillex and Diplo’s hit collaboration with him.)

Angello and Garrix, both wearing all black and alternating drags on cigarettes with puffs on an industrial-grade vape device, are cheerful and chatty, excited about their latest projects. For Angello, who left his bandmates Axwell and Sebastian Ingrosso in 2013, that means prepping his debut solo album, Wild Youth. Garrix has been cranking out a slew of fresh music, including tracks with Usher, Tiesto and Ed Sheeran. EDM “was becoming so big I really couldn’t ignore it,” says Braun, who compares Bieber’s move into dance to nothing less than Bob Dylan’s career reinventions. “I get instant respect because of who [Angello and Garrix] are. One is a legend and the other is one of the fastest-rising stars in the genre.” 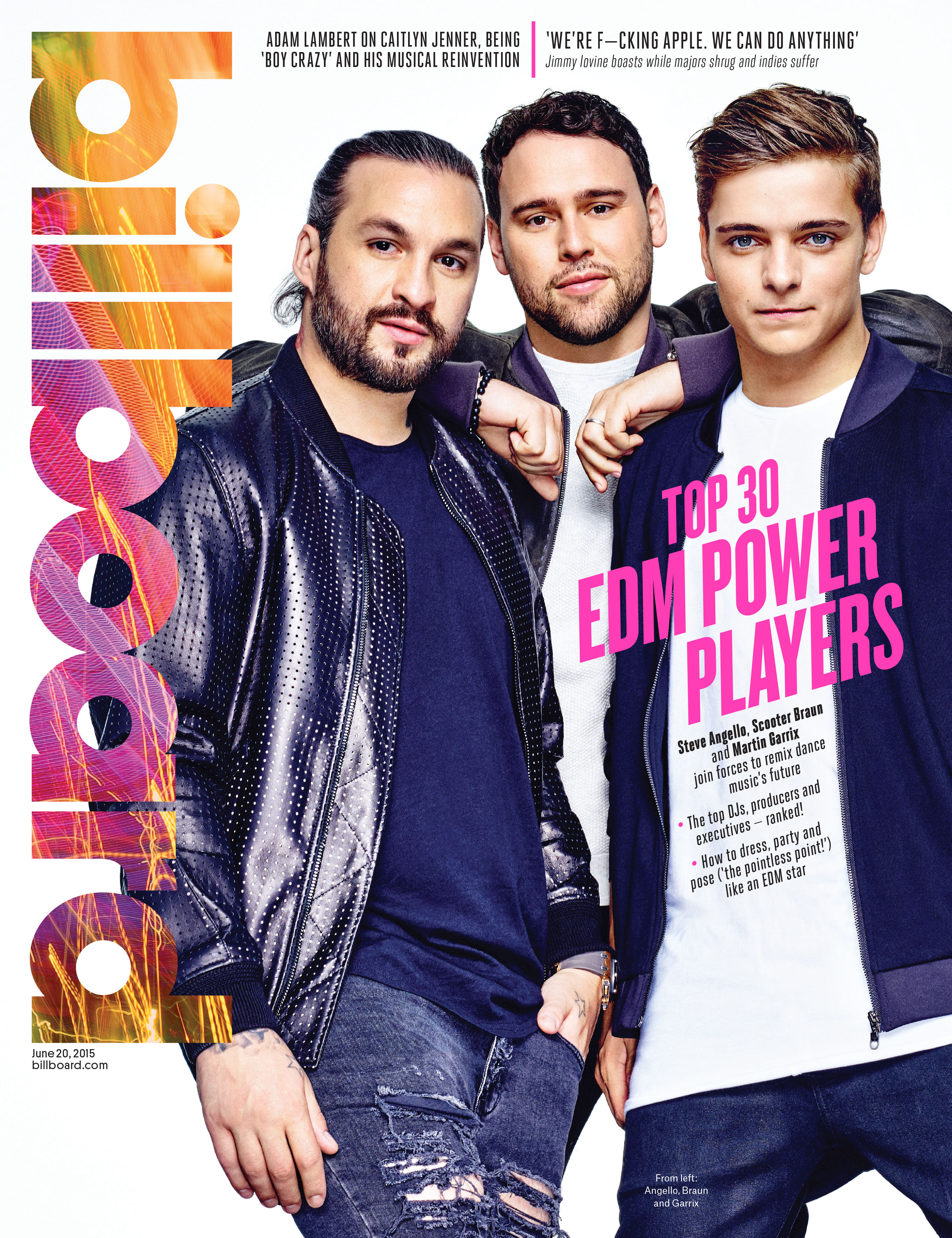 Scooter, how did you connect with Garrix?

Scooter Braun: One of the guys who works for me, Mike George, who actually handles all day-to-day management strategy for Martin, met him when he was DJ’ing at a party. At first I was like, “Ugh, a teenager? People are going to come at me because I’m known for teenagers and pop.” But when I heard “Animals,” I said, “Let’s find this guy.” Martin was on vacation with his family, so I tracked him down at Club Med and called his room.

Martin Garrix: Now I know it’s a total Scooter move to call me in the hotel, but at that point I was in shock. He pretended he was from my school and that it was an emergency.

Steve Angello: When I started out in Stockholm around 1995, we had 30 people in a room and that was a dance club. It was usually gay and it was usually in the middle of some weird area. But in 2004, I came to L.A. to play the Coliseum for an event called Indepen-Dance Day — I had just done a bootleg of “Sweet Dreams” that became an official Eurythmics remix. There were like 50,000 people, and the whole crowd sang along. I was playing vinyl at the time and was shaking so much I couldn’t get the next record in.

Now you’re making an album, even though EDM is mainly a singles format.

Angello: I’m sick in the head. (Laughs.) We had amazing success with Swedish House Mafia, but our “albums” were really compilations that we branded as albums for the tours. So I wanted to challenge myself.

Tell me about leaving SHM, signing to Columbia for this album and then taking the album back.

Angello: I need creative control, and yes, we [Swedish House Mafia] have our differences. When I signed to Columbia, it was great, but as I got closer to the completion of the album I felt I needed more control.

Braun: Steve didn’t go in there and say, “Let me out of my deal.” He said, “How much money have you spent on me? Here’s a check — we’re even.” I’ve never even heard of anyone doing that.

One criticism of EDM is that too much of the music sounds similar, and that DJs overly rely on a handful of hits.

Angello: Something has to change. It has to. When Radiohead’s done with a tour, what do they do? They go back to the studio, lock the door for two years and come out with a new album that sounds totally different and a new show, and they tour it. Nobody’s going to f—ing remember these same-sounding dance records, because they aren’t evergreen.

Has leaving Swedish House Mafia given you more freedom in terms of how you put together a show?

Angello: Definitely. When I do a big show I want to shock everybody. I don’t play any songs I’ve played at any other show.

Garrix: Three years ago I was in the crowd at Ultra. Last year I had a daytime slot, and I played a lot of tracks by others that were already hits, because I was a little afraid. This year I got a nighttime slot and my set was 100 percent music I produced or co-produced myself.

Scooter, your big inspiration is David Geffen. What do you take from his example that still applies in 2015?

Braun: He went into music, film, art, Broadway. The year [2014] we put out our first Martin Garrix record was the year we had our first country No. 1 [Dan & Shay’s Where It All Began, which led Top Country Albums] and Ariana Grande’s My Everything go No. 1 [on the Billboard 200]. Martin’s age group, they’re genreless. The people who came out onstage at Ultra [including Bieber, Grande and Usher] this year, five years ago fans might have freaked. Now people are open to the fact that genres are crossing over.

Is that the thinking behind putting Bieber with Jack U?

Braun: Sure. Justin laid down that vocal in the studio on a piano, and I didn’t know what to do with it. I saw Diplo in a club and he told me he and Skrillex were working on this Jack U album. Those guys ran with it, and now they have this huge record all around the world. There was a nice moment backstage at Ultra: Martin pulled Justin aside and said, “Listen, man, I don’t know what’s going to happen out there on that stage, but I’m really glad you’re doing this.”

Garrix: Having Justin onstage had so much impact.

Braun: It’s like Bob Dylan: He pissed people off, but whenever he switched, he reinvented himself in a way that made him who he is today.

What’s special about dance now that it’s become so huge?

Angello: There’s no fashion, no classism, no racism. We don’t have fights, we don’t have people shooting each other. Because we’re having fun.

Steve and Martin, you spend your nights at big wild parties. Does that take a toll?

Angello: I partied for 15 years! (Laughs.) In Vegas on Halloween three years ago, I partied all night and had a meeting with [casino magnate] Steve Wynn in the morning. I went to bed at 8 a.m.; my meeting was a quarter past 10. Had the conference, felt like shit the whole day, took the jet home. When I got there, my oldest daughter came running up and said, “Daddy stinks!” That second I was like, “OK, I’m done.”

Martin, do you take advantage of the opportunities that come with your job?

Garrix: Of course I party, but I pick when. If I have a weekend full of important shows, I’m not going to do it.

Angello: (To Garrix.) When I was your age I was managed by a drug dealer. You’re managed by Scooter. My tour manager was selling blow off the street corner. We’ve come far! We’re in good hands now.