Prince Royce is literally trying to find his voice. Eyeing a pop breakthrough with his first English-language album, the Bronx-born bachata star met his vocal coach for the first time only 10 minutes ago. But they’re already locked in, working through each line of the 25-year-old’s slinky, Snoop Dogg-assisted R&B single, “Stuck on a Feeling” (which is No. 45 on the Feb. 21 Billboard Hot 100). It’s impressive to hear — until Mauli B., who has worked with Katy Perry and Boyz II Men, instructs Royce to replace every syllable with “nay.” Then it’s hilarious. “Make it really witchy,” the coach says, “and put your finger right here.” Royce smushes the tip of his nose and brays with poise.

“I wouldn’t say I’m changing myself to find a new audience,” the singer says an hour before his lesson at Mauli B.’s Hollywood studio. “It’s about growing, trying new things. There’s a whole other world out there that doesn’t know who Prince Royce is.”

Geoffrey Royce Rojas’ first language is English, but he’s a superstar among Spanish speakers here and abroad. He has four No. 1s on Billboard’s Hot Latin Songs chart; each of his three LPs has topped the Top Latin Albums list. He has been ranked among the “most beautiful” by People en Español. And he has done it all singing bachata, a Dominican folk style comprising acoustic guitars and lots of romantic balladry. In April, after three years of work, he’ll release his first English-language pop album; it’s also his debut with new label home RCA. The track list is still being whittled down, but Royce has confirmed studio time with Chris Brown, Dr. Luke and Magic singer Nasri. It’s a risky move that could alienate loyal fans and still fail to catch on with pop listeners. “What I put out in English, that’s who most people are going to think I am — that’s why I’m being so careful,” he says. “I love hip-hop, R&B, techno and Latin. The album’s a combination of everything I grew up listening to.” 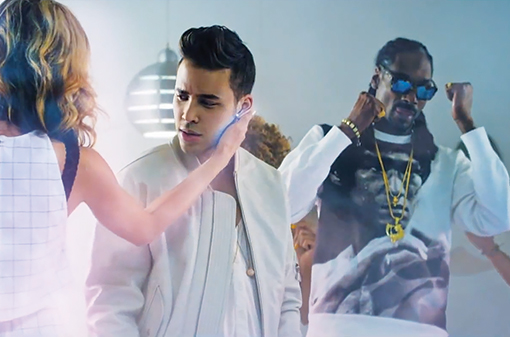 Royce and Snoop in the video for “Stuck on a Feeling.”

Royce is one of four kids raised by a taxicab-driver father and a hairdresser mother in a public housing project in one of the poorest, most dangerous sections of the South Bronx. His parents emigrated from the Dominican Republic in the 1980s, joining a growing network of kin in New York. (He has eight aunts and uncles on his mom’s side, another eight on his dad’s.) Every summer, he would visit his grandmother in the Dominican Republic, where he recalls bathing with buckets — “We understood that we were poor,” he says. But mostly he remembers the beach, the food and the songs she’d play for him. Back home, he’d join his school choir and serenade female classmates with Usher‘s “U Remind Me.” (More recently, he has been romantically linked to model/actress Emeraude Toubia.) When he got a job selling cellphones at 18, Royce saved up to make his own bachata album inspired by the sounds he heard as a child on those family trips.

“People told me, ‘You’re crazy! You need to be singing pop, doing English joints. That’s where the real stardom’s at,'” says Royce. But those Spanish songs got him signed to indie imprint Top Stop by salsa legend Sergio George, who co-­produced Royce’s self-titled 2010 debut. The album included a bachata cover of Ben E. King‘s “Stand by Me,” which has racked up more than 70 million YouTube plays — an impressive breakthrough, but small next to the 471 million clicks for his biggest hit, 2013’s “Darte un Beso,” which topped Hot Latin Songs for 14 weeks. “I grew up playing basketball and eating hot dogs on the corner. But now I go to where my parents are from and the whole country knows who I am,” Royce says, beaming.

RCA president/COO Tom Corson also acknowledges the risks. “If you aren’t attentive to his core, it can feel abandoned. You have to bring them along with you in that journey. Some artists can do it, some can’t — we’re convinced he can.” And so far, so good: “Stuck on a Feeling” is No. 17 on the Feb. 21 Mainstream Top 40 chart; 65 percent of its 34 million in all-format radio audience is from top 40 airplay, according to Nielsen Music.

The irony of an English-speaking Bronx boy raised on hip-hop, pop and R&B being treated as a newcomer isn’t lost on Royce. “Spanish is my second language,” he says quietly, his well-coiffed confidence breaking ever so slightly. “When I started, I was doing interviews in Spanish and had to catch up.” Now, when he meets pop producers and top 40 radio reps, they’re sometimes surprised that he speaks English.

But Royce maintains he’s up for the challenge, flashing the smile that soon could be melting the pop audience’s hearts. “How does the saying go? If you could go back and do it again as the new you, would you? Well, I’m doing it.”