For the third straight year, the U.S. music business is not only growing, it’s growing faster, as overall consumption hit 636.7 million equivalent album units in 2017, up 12.5 percent from 566.1 million in 2016, according to Nielsen Music. And once again, streaming is driving that growth: Overall on-demand streams reached 618 billion, up 43 percent, equating to 412 million streaming-equivalent album units, up from 432.2 billion streams, or 288.2 million SEA, the year prior.

Audio on-demand streams grew 58.7 percent to 400.4 billion, up from 252.3 billion in 2016, while video on demand grew to 217.7 billion streams, a 20.9 percent increase over the prior year total of 180 billion. With that, the U.S. industry produced its first 1 billion-stream song in a single year, as Luis Fonsi & Daddy Yankee’s “Despacito” (featuring Justin Bieber) hit 1.3 billion total on-demand streams in 2017.

Digital-album and CD sales both dropped 19.6 percent, to 66.2 million and 88.2 million copies, respectively, and track sales (554.8 million, down 23.4 percent) also continued to fall, though vinyl once again ticked up, growing 9 percent in 2017 to 14.3 million. But growth in the consumption business model is outpacing the 19.2 percent decline in album sales plus track-equivalent albums (down to 224.6 million units in 2017), a welcome change from the last format shift when downloads didn’t grow as fast as the decline in CDs. That means digital’s share of album consumption grew to 83.8 percent in 2017, up from 78.2 percent the year prior, with physical falling to 16.2 percent from 21.8 percent in 2016.

Examining the U.S. business in another way, current music — defined as sales within the first 18 months of a title’s release, longer for albums that remain in the top half of the Billboard 200 and/or have tracks still being played by mainstream radio — accounts for 39.3 percent of all consumption album units, or 250.5 million units; while catalog album consumption units totaled 60.7 percent, or 386.1 million units in 2017, almost the same split as in 2016.

— The two top-selling vinyl albums of the year were The Beatles’ Sgt. Pepper’s Lonely Hearts Club Band and Abbey Road.

— Drake was the most-consumed artist overall of 2017, led by 5.9 billion on-demand audio streams of his songs.

— Two Migos hits (“Bad and Boujee” and “T-Shirt”) and features with Post Malone (“Congratulations”) and DJ Khaled (“I’m The One”) saw Quavo appear on four of 2017’s 20 most-streamed songs. 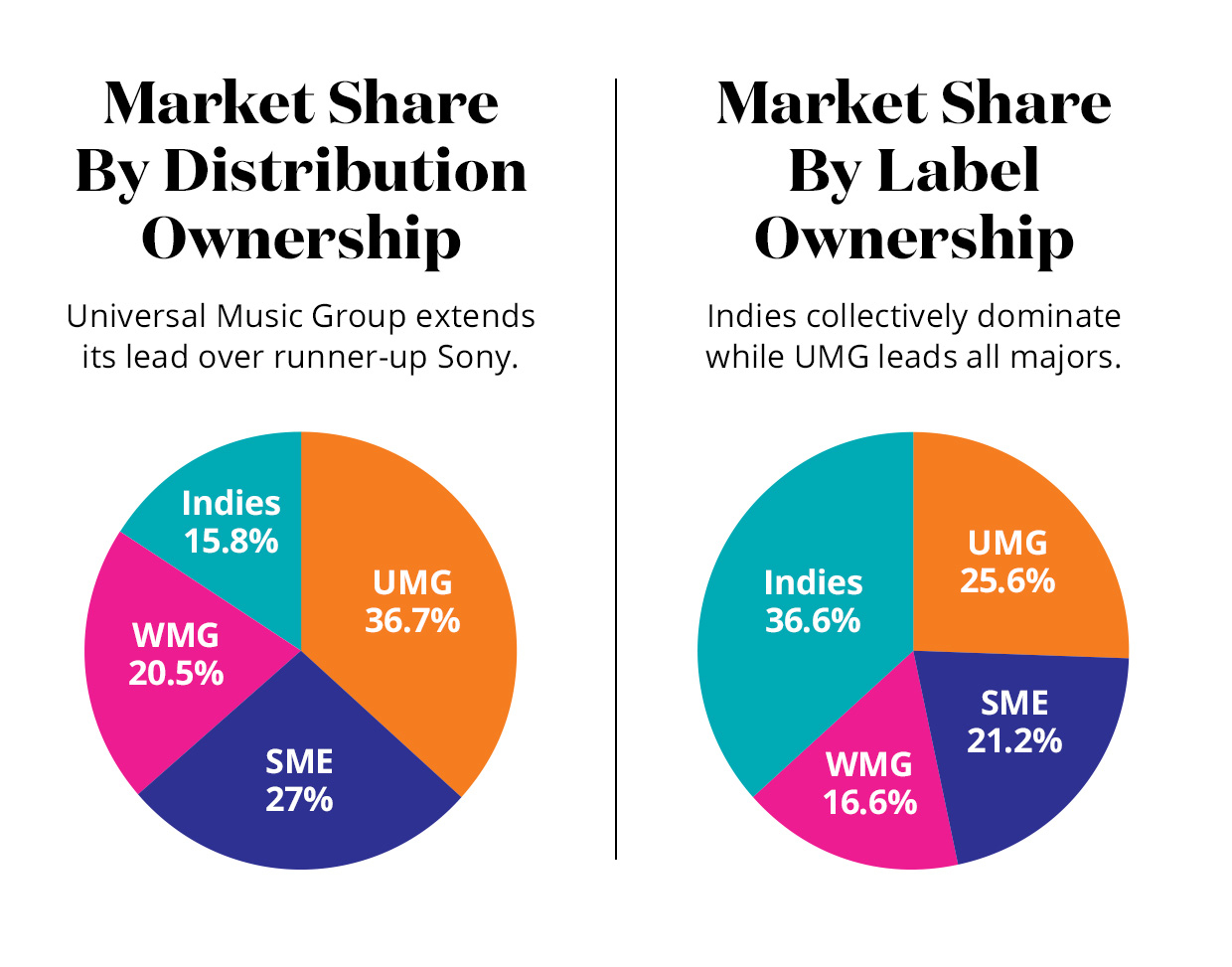 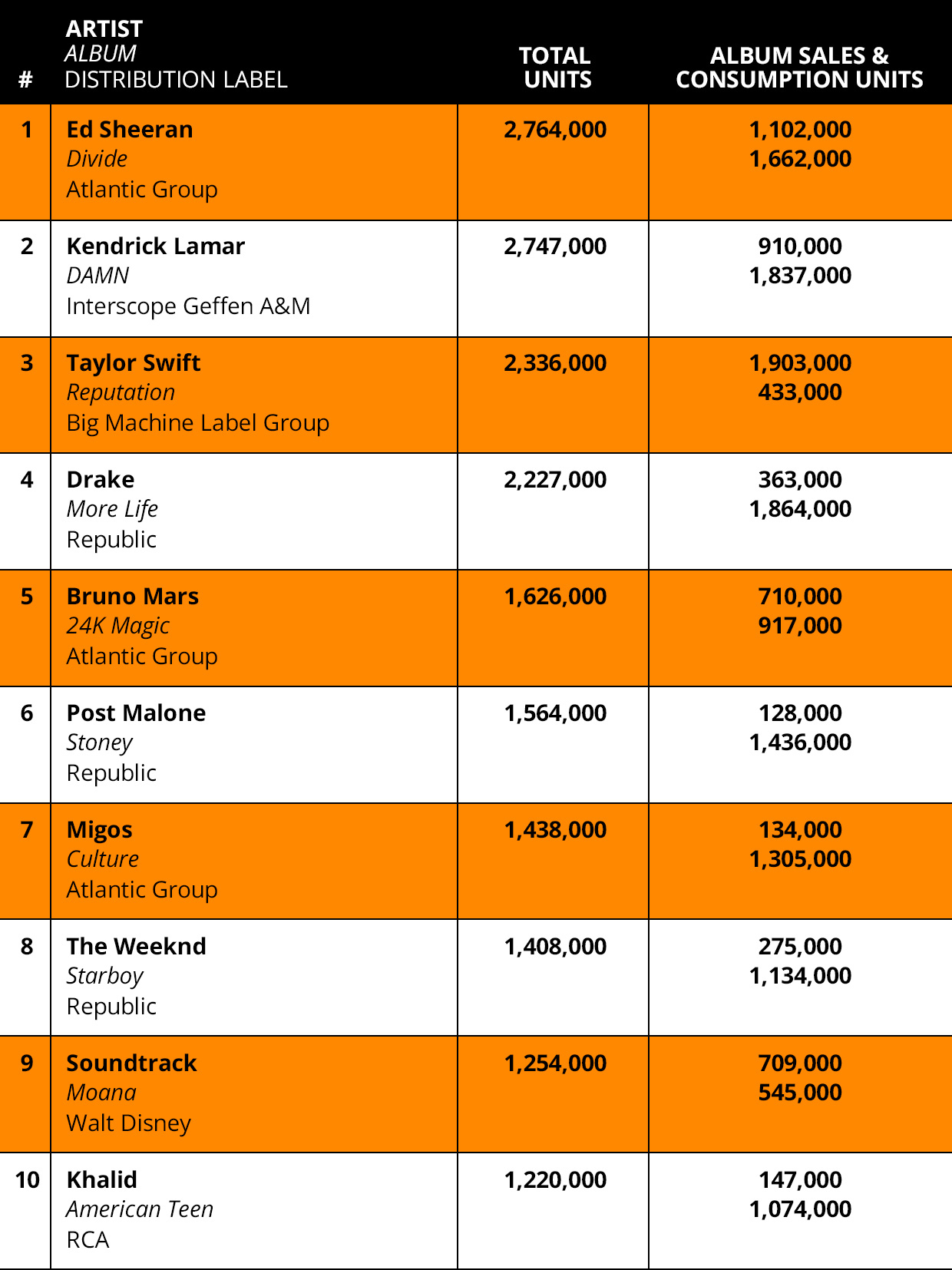 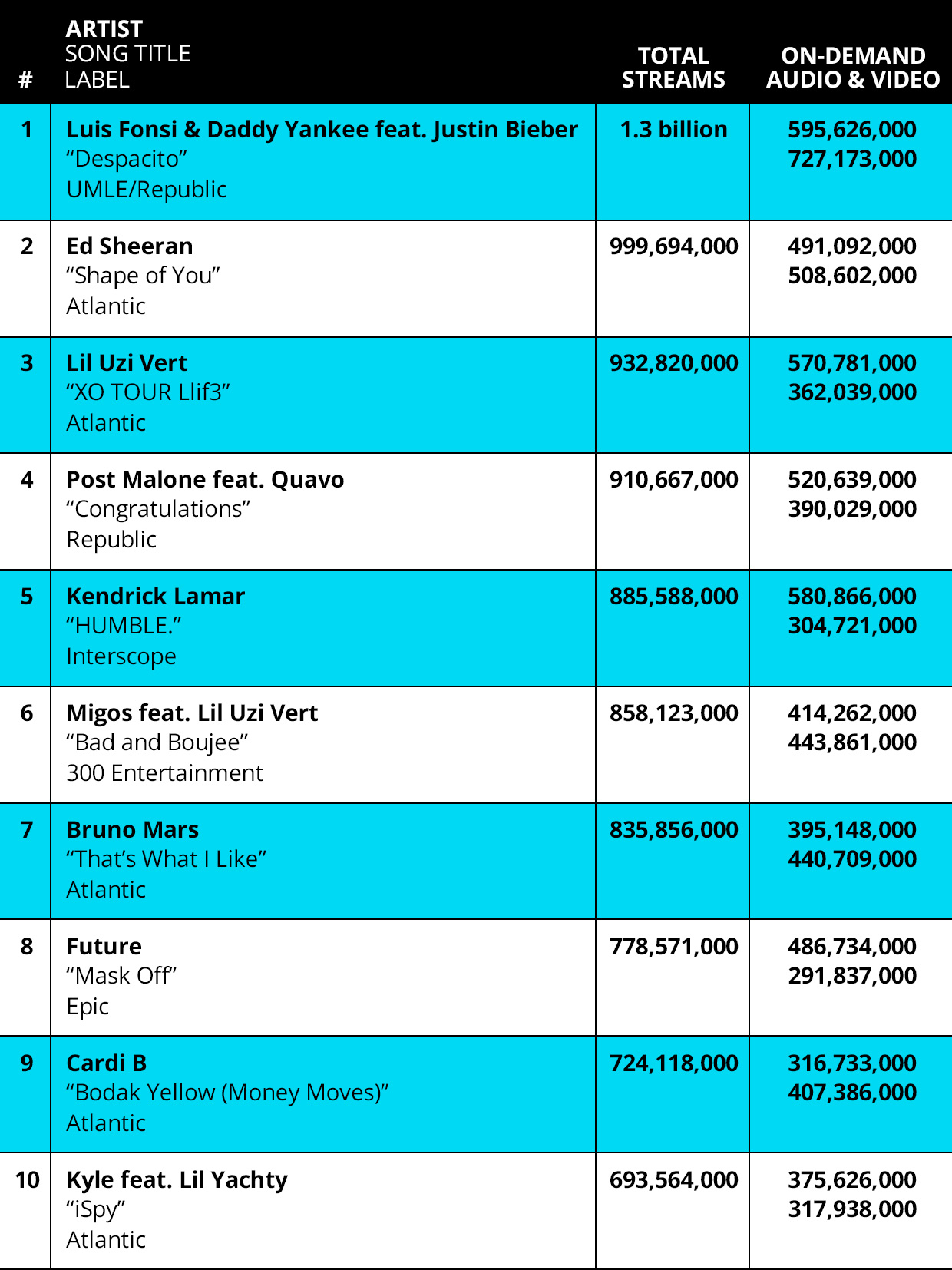 This article originally appeared in the Jan 13 issue of Billboard.