Afrobeats singer Omah Lay and Justin Bieber get the party started with their brand new collaboration “Attention,” which was released on Friday (March 4) via SIRE/Warner Records.

The pair ride the rhythm of the sensual and vibrant Afrobeats crossover track’s sizzling hi-hats, bouncy percussion and purring pop synth riffs, courtesy of the song’s producers Harv (Bieber’s frequent collaborator) and Avedon, as the singers repeatedly coo in the chorus, “Show me a little attention.” Bieber packs in big vibes when he asks, “Should I drink up/ Smoke up?/ I need some/ freedom/ Freedom, ah! in my life,” while Omah effortlessly lets the last word of each line roll off his tongue to the point where it’s more felt than heard. The song is already being promoted to U.S. pop radio starting on Monday, March 7.

Beyoncé Enlists Madonna for 'The Queens Remix' of 'Break My Soul' & Yes, It's Iconic

“I was in the studio one day with Harv,” Omah tells Billboard about his “Attention” recording session during his second trip to Los Angeles. “As soon as I heard the beat, the lyrics were already in my head. We didn’t even spend 30 minutes making the song. Harv called him and I FaceTimed Justin Bieber for the first time in my life. Later on, Harv got to play the song for him, and … before I knew it, he sent in his verse and the song was good just like that.”

This isn’t the first time Bieber has made a splash sauntering into Afrobeats territory in the last year. Last August, he hopped on the remix of Wizkid’s “Essence,” featuring Tems, and helped catapult the sultry 2021 summer anthem into the top 10 region of the Billboard Hot 100. The Biebs previously had added Omah and Nigerian singer-songwriter Alpha P on the “Masterkraft Remix” of his Hot 100-topping single “Peaches,” which originally featured Giveon and Daniel Caesar, last June. He also had recruited Afrofusion heavyweight Burna Boy for “Loved by You” on the “Triple Chucks” deluxe version of his Grammy-nominated album Justice last March. DJ Tay James, Bieber’s DJ and A&R, explained in an interview with Billboard last fall about how he helped orchestrate the “Essence” remix and how the Canadian superstar was keen on collaborating with African artists.

“It’s something I know Justin is [proud of] – he loves all types of music. He’s somebody that puts me on to everything,” James said at the time. “He put me onto Omah Lay. I never heard of Omah Lay until Justin came into rehearsals listening to him.”

The first time the Canadian pop sensation and Nigerian triple threat singer/songwriter/producer born Stanley Omah Didia link up in person for the first time is on a blistering cold winter’s night at Big Sky Movie Ranch, a 7,000-plus acre private movie ranch in Simi Valley, Calif., to film the “Attention” music video, directed by Bieber’s frequent collaborator Colin Tilley. The two share a warm embrace by the simulated bonfire — but the connection between Omah and Bieber, who are wearing complimentary black and red ensembles with backwards baseball caps, is palpable. “I didn’t even know he was the one. I was expecting him, and by the time I knew there was someone right in front of me, it was Justin. I was like, ‘Oop! Oh yo!’” Omah exclaims with a laugh while describing their synergy. “One thing I loved about working with Justin Bieber was how easy it was. I didn’t even expect it to be that simple.”

Filming the “Attention” visual looked deceptively simple (considering the meticulousness associated with filming music videos during COVID), as Bieber and Omah seamlessly traded off their verses while surrounded by dancing girls and boys wearing a colorful assortment of puffer jackets, two-piece sets, mini-skirts, floral pants, platform heels and go-go boots all while rocking dreads, braids and Afros. And the bonfire isn’t the only thing heating up, as lust lingers in the air and compels the singers to find a special someone to get their groove on. Check out exclusive behind-the-scenes photos from the video shoot below. 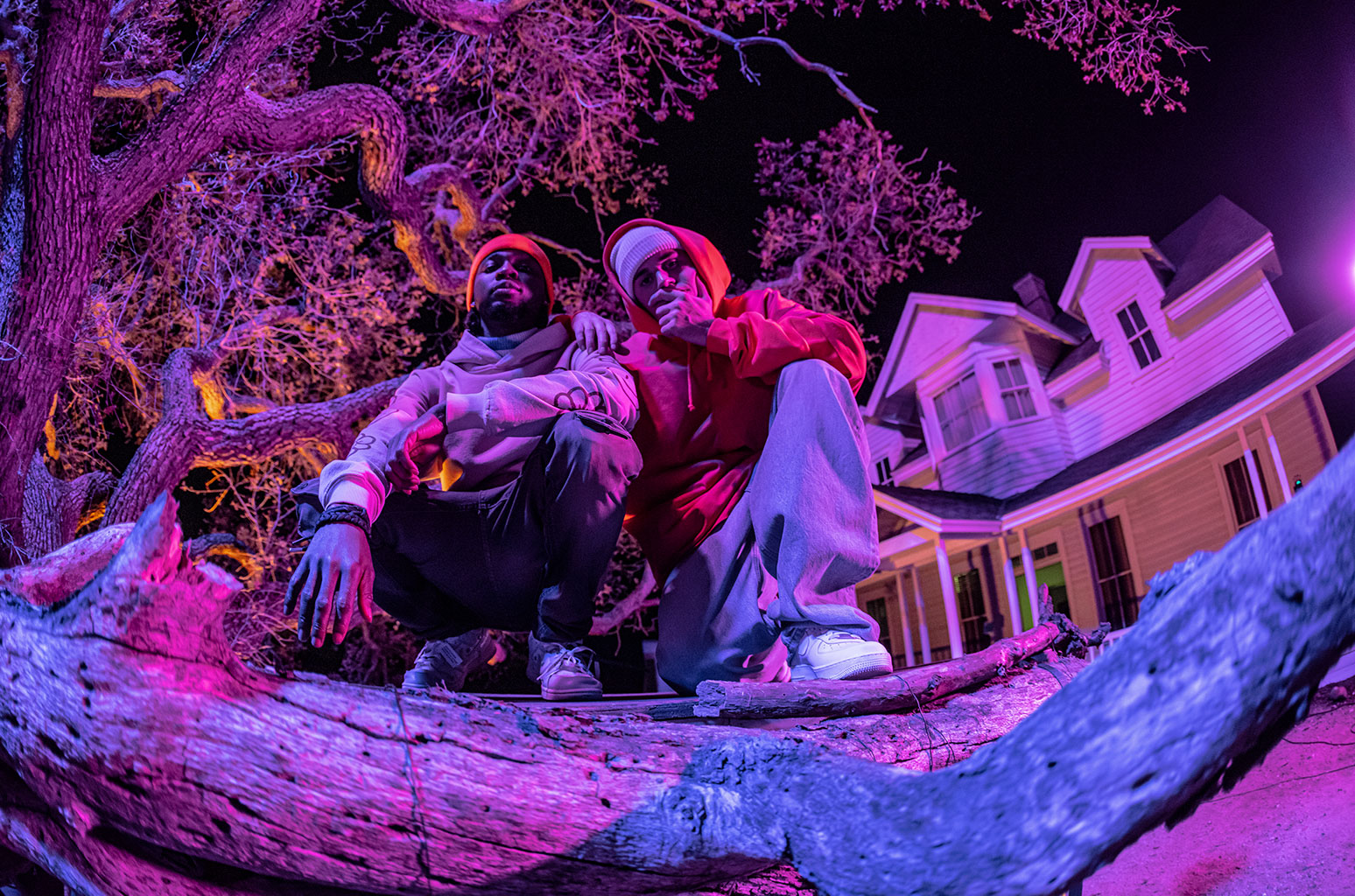 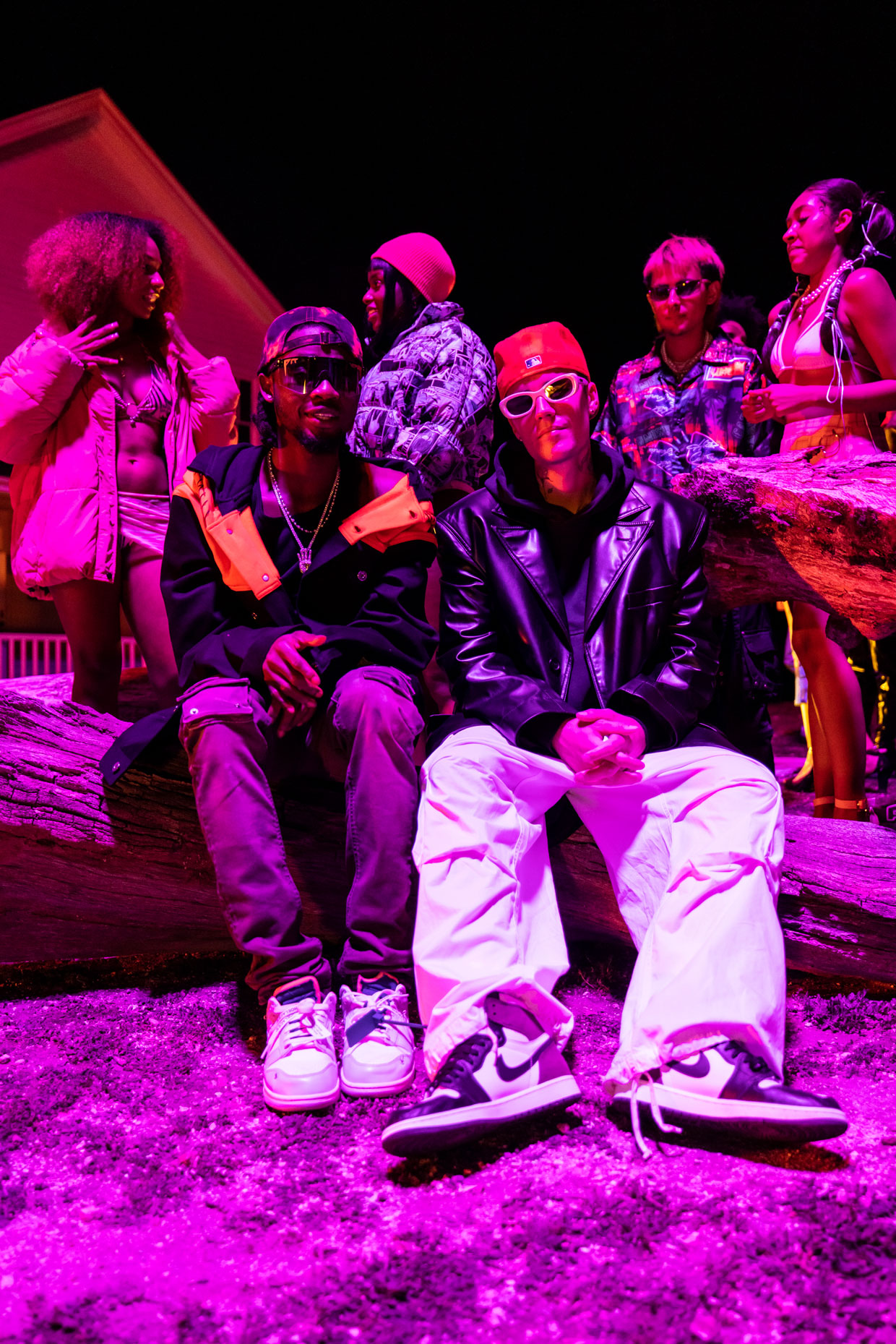 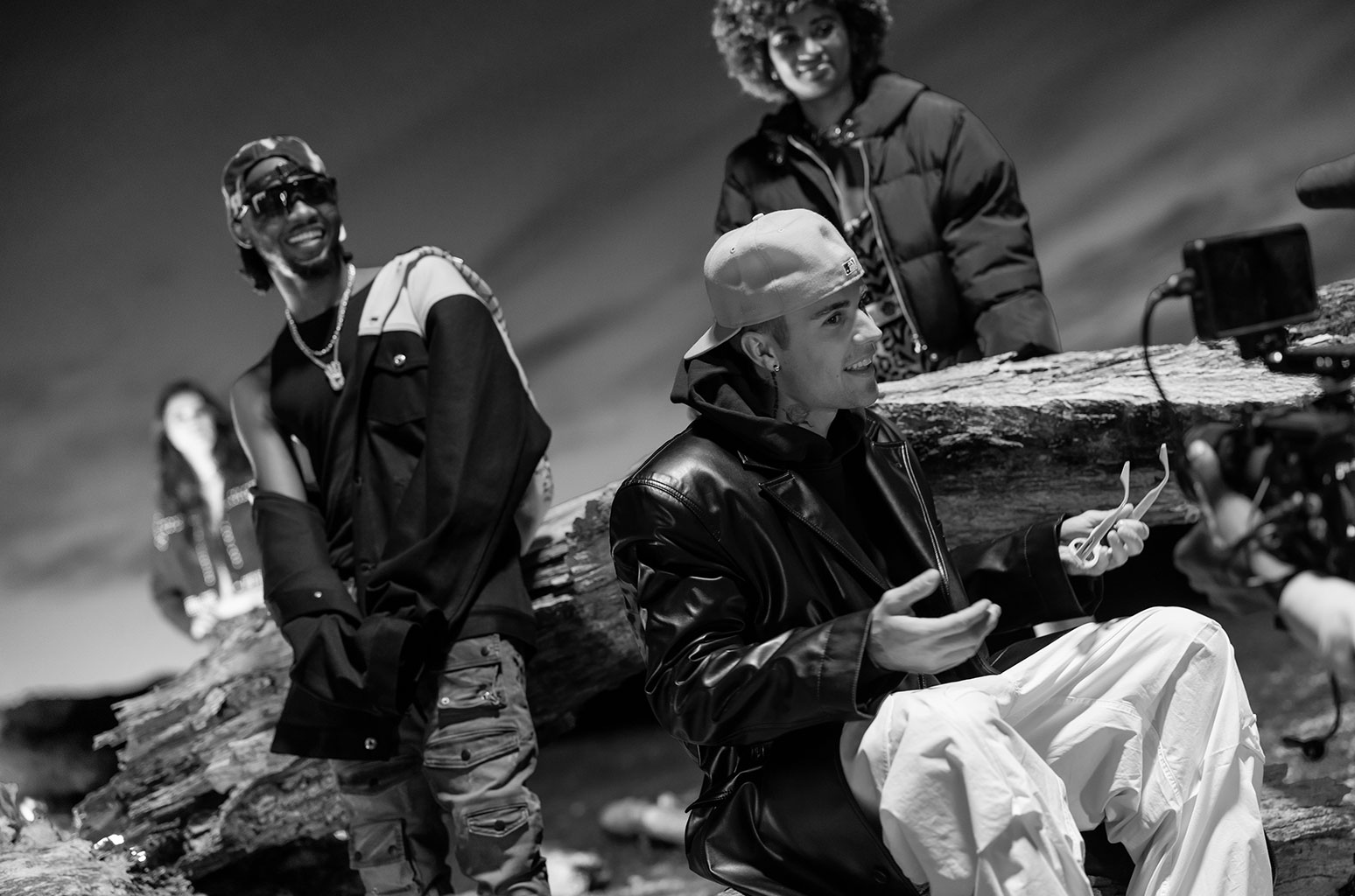 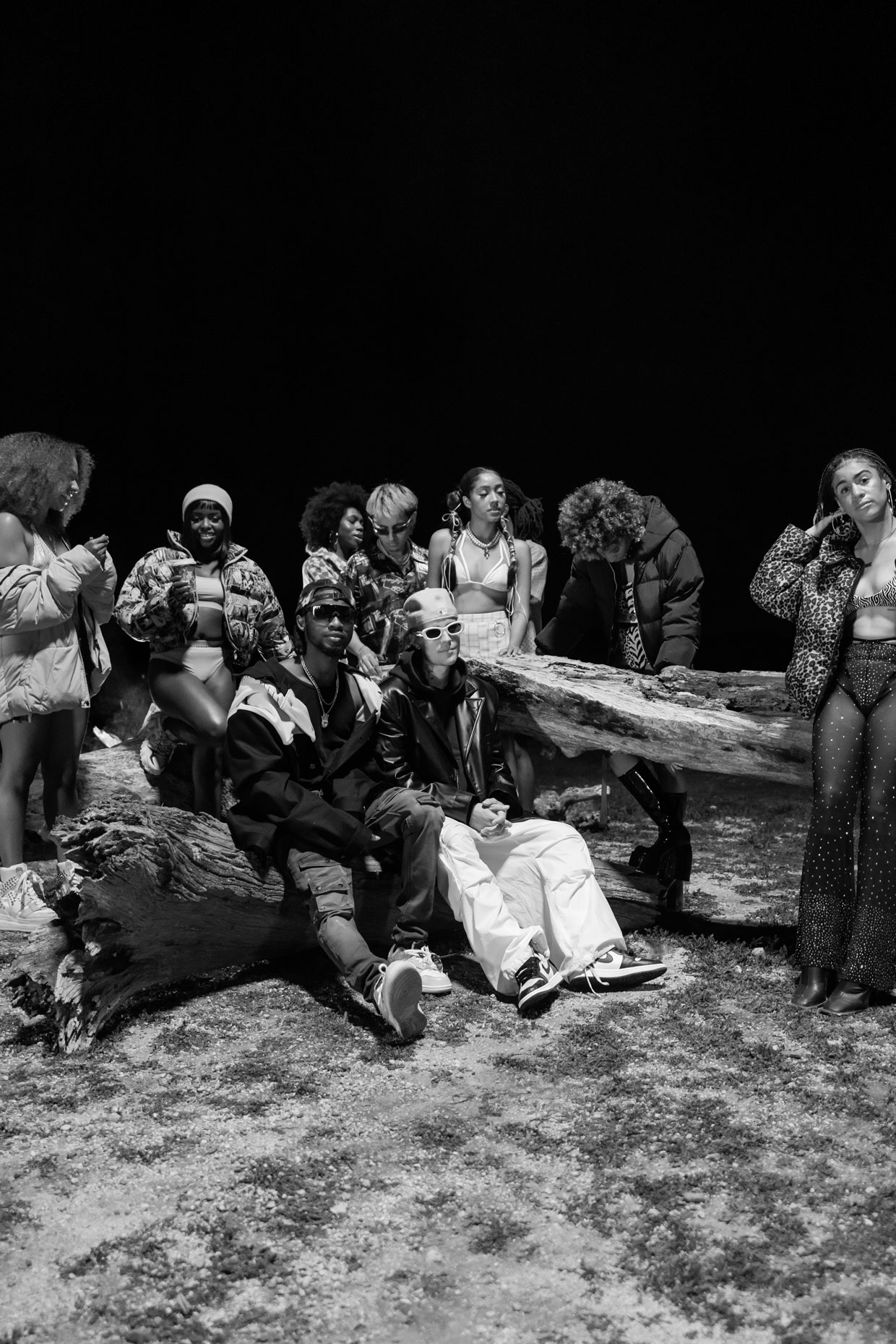 “‘Attention’ is one of those songs where I’m just saying the truth, where I’m telling my story,” Omah describes the newest single from his upcoming debut studio album Boy Alone, due this spring. “It’s basically about sometime in everybody’s life, you’re lonely. You can’t just always have somebody all the time. Especially as an adult. That was actually the headspace that I was in when I made this song, a little lonely. I want the people that are going through the same thing to feel like I was talking to them. I’m human. I’m just like them. I feel exactly the same way they feel.”

But the song that made Bieber first feel connected to Omah, James tells me during the “Attention” single cover art photoshoot, is “Damn,” a bouncy yet contemplative single from his 2020 EP Get Layd about unconditional love that later invited a remix from Atlanta singer-rapper 6LACK, who’s been privy to collaborating with other Afrobeats artists such as Fireboy DML and Spinall on the “Sere” remix and Rema on “4AM” with U.K.’s Manny Norte and Tion Wayne. “I think that was actually the start of everything,” Omah says of “Damn” and its 6LACK remix. “That was when we were beginning to realize that, ‘Oh, these people actually f—k with Afrobeats.’ It was a moment.” 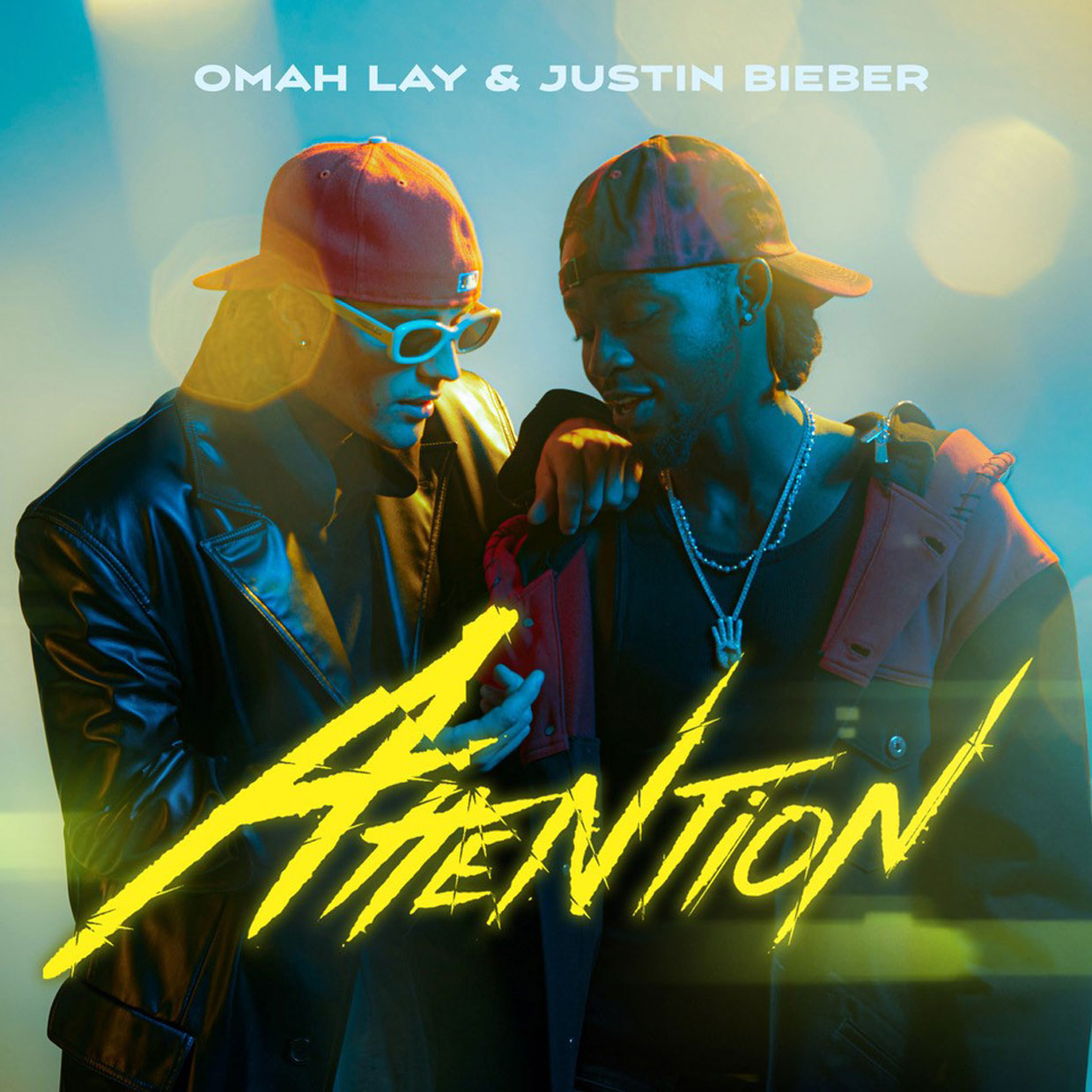 Aside from his genuine appreciation as a music fan for different cultural styles of music, Bieber knows how to wield his power as a hitmaker and expose fans to sounds from around the world they aren’t accustomed to in the West. “Doing music with international artists, whether it’s Afrobeats or reggaetón or any artist, helps shine a light to something that some of Justin’s fans weren’t listening to,” James previously explained to Billboard, while alluding to his highly successful “Despacito” remix with Luis Fonsi and Daddy Yankee, which spent a whopping 16 weeks atop the Hot 100. “It’s a collaborative effort pushing crossovers of culture.”

While more mainstream Western acts collaborate with Afrobeats artists – such as Ed Sheeran on Fireboy DML’s “Peru,” which has topped both Billboard’s Top Triller U.S. and Top Triller Global charts – these remixes have flummoxed certain fans about whether artists like Sheeran and Bieber are meaningfully contributing to the Afrobeats movement or riding its momentum for their own global commercial appeal. “I mean, if I hear a new song, if I hear a new sound that is awesome, I’d definitely want to jump on it. I think that’s just the same with them,” Omah explains about the Afrobeats remix phenomenon.

Later, he adds that the problem is more with remixes themselves and fans preferring the original versions of songs: “Afrobeats is a vibe, and people like Justin Bieber or Ed Sheeran have the audience. As much as there are a lot of people listening to Afrobeats right now, it’s still alien to a lot of people. People like Ed Sheeran, Justin Bieber, Drake, [they’re] just trying to tap in. These [artists] actually f—k with the song and they have the platform to make more people listen to these songs. It shouldn’t just be an African thing.”

And they’ve certainly paid off. Prior to the arrival of the Bieber remix of “Essence” on Aug. 13, 2021, the song had reached No. 44 on the Hot 100 after steadily climbing the chart since its arrival in July. After the first tracking week, “Essence” (both versions of the song combined into a single entry) leaped to No. 16 and eventually peaked at No. 9. In the case of “Peru,” the song had 1.1 million official on-demand U.S. streams through Dec. 23, 2021, according to MRC Data. Following the release of the Sheeran remix on Christmas Eve, the song registered 3.9 million official on-demand U.S. streams in its first tracking week, with the Sheeran remix accounting for three million of those total streams in that week. The song finally debuted on the Hot 100 in January 2022, at No. 46. (“Peru” also received another remix in February featuring West Coast rapper Blxst and U.K.-born, Atlanta-raised MC 21 Savage.)

But songs like CKay’s “Love Nwantiti (ah ah ah)” have been able to gain traction stateside without the help of a Western act. Its remixes, in fact, were helmed by other artists from the African continent: Fellow Nigerian singer Joeboy and Ghanaian singer Kuami Eugene, as well as Mauritian Dj Yo! and AX’EL, are on the more notable versions, while Moroccan rapper ElGrande Toto is featured on the official North African remix and Congolese French rapper Franglish takes over on the French remix. Afrobeats artists are also making major cross-continental moves themselves to trace the trek of the music. In fall 2021, stars such as Omah, Burna, Wizkid, Tems and many more embarked on their first-ever North American tours, meeting fans where they’re at and seeing the Western migration of Afrobeats music through.

“It feels more present when we come out here. They could just listen to it and that’s it. But actually seeing the Afrobeats artists right here in America, it’s like, ‘OK, that’s close to home,’” Omah says. “Afrobeats makes you dance. And I think this is the time when the world is in that headspace. The world wants to dance.”

Listen to “Attention” below.