Move over, Seth Rogen. A new king of stoner films is coming to town.

Born Colson Baker, MGK will apparently play the leading role of London Ransom, a movie star going through a tough personal crisis. “When he wakes up to an implied breakup text from the love of his life, his world is turned upside down,” a press release says.

A poster for the film has also been unveiled and shows the A-list cast of supporting actors photoshopped on top of MGK’s head, marijuana smoke drifting out of the Mainstream Sellout artist’s mouth. “When life hits a new low, reach for a new high,” the poster reads.

Good Mourning is set for a May 20 release in theaters and on demand, though no streaming platform was specified in the release.

“We are looking forward to bringing this wild comedy to audiences in theaters and at home on demand. The film is a reminder of how fun movies can be to make and watch,” Open Road Films CEO Tom Ortenberg said in a statement. “Colson and this incredible cast will bring audiences to their knees in laughter and leave their jaws on the floor.”

On Twitter, Kelly promised that a trailer for the film will arrive (of course) on 4/20. 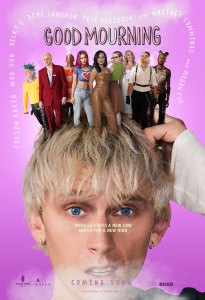