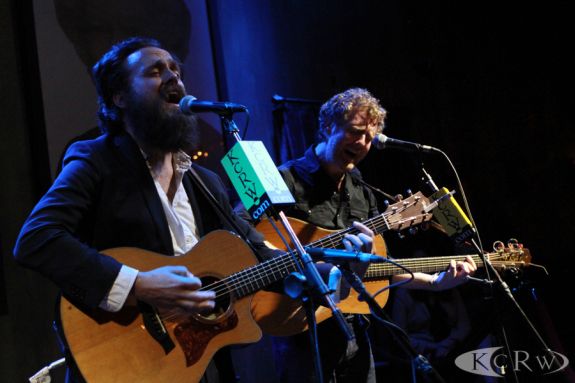 Iron and Wine’s Sam Beam introduced new music to a rapt audience packed into Hollywood’s Sayers Club in a KCRW-sponsored evening that included a set from Glen Hansard, a few duets and a lot of laughs.

Howard Greynolds, who manages both artists, tossed a coin to decide who would play first; Beam got the honors. KCRW, the Santa Monica-based public radio station, had kept the show under wraps and broke with tradition by not recording it for late broadcast.

Both musicians took the freewheeling nature of the evening to heart, diving into the music with no set lists and often honoring requests from the audience. Beam, naturally, wanted to expose his new material, even responding to one request that he could not fulfill by saying “there’s a misconception that we sit around practicing all the time. I tend to spend my time writing.”

He began with “Caught in the Briars, the opening number on “Ghost on Ghost,” Beam’s fifth album under the name Iron and Wine, will be his first on the Nonesuch label. It comes out April 16.  The new album’s “Grace for Saints and Ramblers” and “Low Light Buddy of Mine” were also part of the 45-minute set.

Hansard stuck with songs from last year’s “Rhythm and Repose” telling stories abut his first interactions with KCRW DJs — all the way back in 1992 when he was a busker in Santa Monica. His anecdotes including an adventure with Marilyn Manson, whom he met in a bar’s men’s room and then wound up at his house.

He tapped into his award-winning work “Once” twice, singing “Say it to Me Now” without voice or guitar amplification and, because of a request, the Oscar winner “Falling Slowly.”

Both musicians remarked how different the tiny club felt from their usual gigs and stillness in the room was remarkable. Beam sang the first line of “The Trapeze Swinger” and one fan, in a stage whisper, remarked “I love this song.” It derailed Beam, who stopped playing.

“Thanks for coming, dad,” he joked. “You don’t have to sneak in – I can put you on the list.” He resumed the number,  the audience seemingly more focused than before.

Iron and Wine begins a tour in support of “Ghost to Ghost” with a show May 11 in Napa, Calif., followed by seven concerts on the East Coast and then a European run.

Hansard has a handful of North American dates in June, including a Joni Mitchell tribute show in Toronto, June 18 and 19.