The HARU NEMURI North America Tour 2022 — previously postponed four times due to the pandemic — is set to kick off with a performance in Brooklyn, New York, on March 4, followed by six concerts in all, including a show at South by Southwest in Austin, Texas. The shows in New York, Los Angeles and Chicago are sold out. 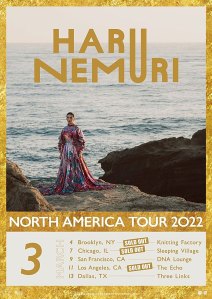 The rapper and music producer also shared the details of her second studio album, titled Shunkaryougen, due April 22.

The upcoming new project will be her first in four years since her highly acclaimed debut album Haru to Shura. Shunkaryougen — a Japanese four-kanji neologism coined by Haru herself — will be released digitally and as a 12-inch vinyl. All 21 tracks on the set were written, composed and arranged by the 27-year-old singer-songwriter.

The album contains some previously released tracks including “Seventh Heaven” — the theme of the Japanese movie Colorless (Japanese title: Sarugakucho de Aimasho) — “Bang” and “Inori Dake Ga Aru” (“There’s Nothing But Prayer”), as well as some unreleased music, such as the “déconstructed” version of the live anthem “Kick in the World” and “Sister With Sisters,” which features many guests in the chorus.

The cover art, unveiled along with the track list, expresses the concept of the coined word and theme of this album, Shunkaryougen, expressed with four kanji characters that suggest “unstoppable spring fire” when put together. The jacket designed by Kanako Taki features a photo of the artist — whose surname in Japanese is written with the kanji for “spring” — standing regally near a body of water wearing an intricately detailed, flowing gown by rising fashion designer Yu Tanaka. The photo is by Jun Ishibashi and the visuals express Haru’s noble strength and intense determination.