As the dance world pushes further into the nonphysical reality of the metaverse, electronic festivals continue consolidating under corporate ownership and events experience a stop-start-stop again comeback during the pandemic, the current challenges for indie dance festivals are myriad and existential.

But one such longstanding fest is holding a candle for a certain kind of bespoke, rootsy show with no corporate ties — an eclectic slate of music, along with programming like talks, workshops and yoga, and strong ties to the West Coast’s hallowed transformational festival scene.

The 14th annual Gem and Jam festival begins today (February 3) at the Pima County Fairgrounds in Tucson, Arizona. Extending through Sunday (Feb. 6), the event takes the first half of its name from its overlap with the longstanding Tucson Gem, Mineral & Fossil Showcase, which draws experts and enthusiasts of the field from around the country and beyond.

In fact, Gem and Jam began in 2005 as an afterparty for the Showcase, eventually growing out of Tucson’s live music venues and, in 2013, expanding into a full festival format. Since this expansion, Gem and Jam has operated via private funding. (After taking a year off in 2019, the event was one of the few festivals to happen in 2020 as it took place just weeks before the pandemic hit the U.S.)

As events cautiously return this season, approximately 6,000 people are expected to attend Gem and Jam this weekend, with the festival able to expand its footprint in the fairgrounds as crowd size grows in the coming years, as organizers expect it to. And while it will be cold this weekend in Tucson, with nightly temperatures dipping down to the mid-30s, Gem and Jam partner Josh Pollack says that hosting the event so early in the year gives it an advantage.

“Because we coincide with the Gem Show, we are kind of like the first festival of the year,” Pollack says. “We’ve been really lucky in that regard, because we don’t really have much competition with other independent or more major festivals.”

Featuring a lineup including jamtronic veterans STS9, Dirtybird founder Claude VonStroke, live electronic fusion band Dirtwire, psytrance icons Shpongle, Swedish bass favorite Liquid Stranger and many other non-mainstream electronic and live acts, the lineup hearkens back to the heady early days of California’s Lightning In a Bottle festival and Symbiosis festivals, along with the dozens of smaller, more renegade gatherings that happened throughout the region.

Here, Pollack talks about the being an indie fest in 2022, competing and crossing over with more major (and mainstream) shows and how “the whole crystal and mineral crew coincides so much with the music scene.”

Gem and Jam seems like it’s part of a festival tradition of really rootsy, bespoke events that are directly linked to the underground electronic music culture of Southern California and the greater region. Do you think that’s fair to say?

I really do. We definitely have become one of the flag holders of that scene, especially in the southwest region. I think it’s really important, because we feel such a strong sense of support for the music, and we know that people will come out for it and people support it as well. For one reason or another, the genre feels a little underrepresented on a national level. So being able to do this and pull people from across the country, because these types of events don’t really happen that frequently, is a really special thing.

Events like Coachella in Southern California and EDC in Las Vegas cast a wide net in terms of radius clauses, which really limit when and where artists on their lineups are able to play. With Tucson being fairly close to these markets, to what extent are radius clauses an issue when you’re assembling your lineup?

It’s certainly something we have to deal with, this year more so than ever before — because of some of these larger promoters, like your Insomniacs, they will book artists for six to eight show contracts over the next year, and all those shows are going to be with that one promoter. So it’s difficult for for us to even get to some of those acts that they have these multi-show agreements with. 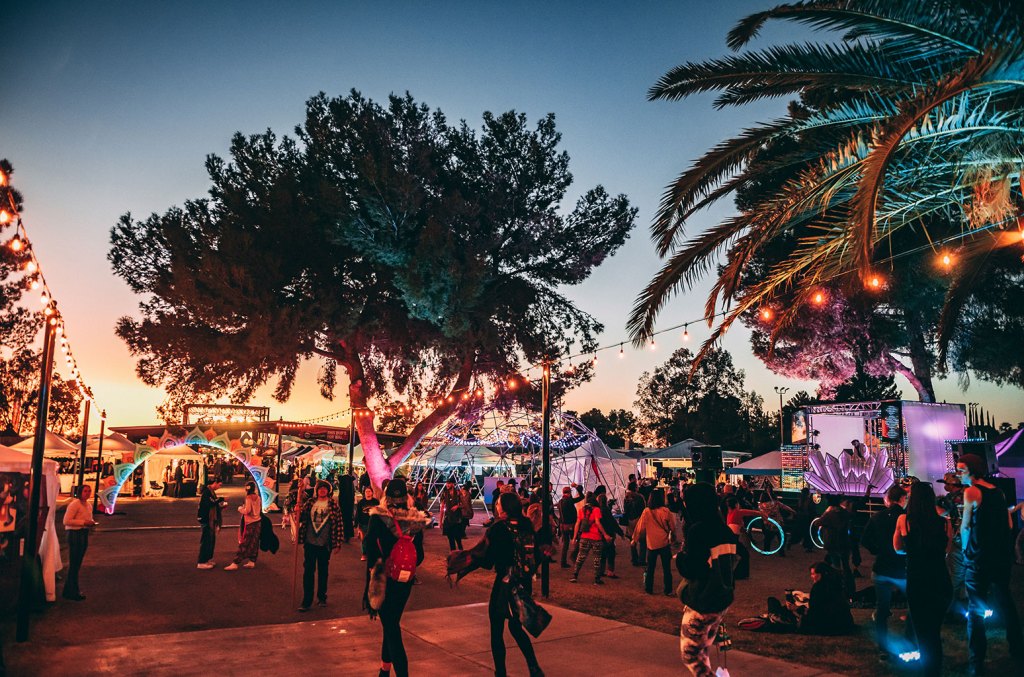 How does that growing crossover effect what you do?

It seems that’s going to be happening more and more as our festival grows — some of the artists we’re targeting are also playing some of those events. So yeah, it’s definitely difficult [with radius clauses.] Booking the lineup this year, we’re so thrilled with how it came together, but it went through many iterations of who we wanted to target. Just running into roadblocks and having to re-strategize the whole thing.

What kind of audience is a lineup like this for?

We definitely have a lot of folks who are really into the jam bands and live bands and kind of rootsy jam music. But at least since I’ve been involved, we’ve been wanting to attract diverse groups of people who are into different styles of music and do it in a way that’s cohesive and that all kind of blends together — because we, as organizers, are into a lot of different styles of music. We like jam bands and we like bluegrass, but we also like bass and house music.

How does that approach set you apart from other festivals?

These days, you’re seeing a lot of festivals that are very specific in genre, where there’s one or a handful of genres and sounds. We really didn’t want to do that. We wanted to be a little bit more eclectic, and — at least for a boutique festival of our size — there aren’t many other options for festivals that really do that. We can get really creative with how we’re putting the lineups together. But definitely, the jamtronic cornerstone is integral to how we curate everything.

Is there a formal association between the festival and the actual Gem and Mineral Show?

In spirit only. The Tucson Gem Show is really expansive — it’s not really centralized in one place, so we technically are our own gem show in the eyes of the Tucson Gem Show, because we have so many crystal and mineral vendors on site. We get listed as one of the hundreds of gem shows happening in Tucson. So while we don’t have any sort of partnership, we make sure we’re coinciding our dates. But beyond that, it’s purely kind of an energetic relationship.