If elephants never forget, then Beys — those would be the loyal members of Beyoncé‘s Beyhive army — not only remember all, but take names too.

The drones were unleashed upon one unsuspecting Emma Watson earlier this week following drama surrounding her Vanity Fair cover shoot — particularly, one photo in which a sliver of her breast is exposed. A few followers called the photo misrepresentative of the “brand” of feminism that Watson preaches. The actress snapped back that “feminism is about giving women choice … It’s about freedom. It’s about liberation. It’s about equality. I really don’t know what my tits have to do with it.”

Maturing from Hermione to Belle in @beautyandthebeast is a true coming-of-age story for @EmmaWatson: “I couldn’t care less if I won an Oscar or not if the movie didn’t say something that I felt was important for people to hear.” Read the full cover story at the link in bio. Photograph by Tim Walker.

But of course, the Beyhive somehow managed to make the drama about Beyoncé. Fans of the singer dredged up an interview from a 2014 issue of Wonderland magazine in which Watson and fellow young feminist Tavi Gevinson discussed their reaction to Beyoncé’s self-titled 2013 album, and the conflicting thoughts it provoked regarding the cohabitation of femininity and feminism in the same space.

The Beyhive, however, clung to the following quote as evidence of Watson’s anti-Beyoncé message: “On the one hand she is putting herself in a category of a feminist … but then the camera, it felt very male, such a male voyeuristic experience of her,” she said.

Several Beyoncé fans took the quote to mean that Watson believed Beyoncé’s sexuality disqualified her from being a true feminist. Soon after Watson’s Vanity Fair fiasco, they began tweeting at the 26-year-old and leaving comments on her Instagram posts calling her a hypocrite.

Emma Watson is hypocrite. Now that she is being attacked for the same thing she attacked Beyonce for 5 years ago, it is problem. Girl bye.

On Tuesday, however, the Beauty and the Beast actress addressed the controversy with a photo of an excerpt from the original 2014 interview. “This is the part of my 2014 interview with Tavi where we talked about Beyoncé. My words are in bold,” she wrote alongside the photo. 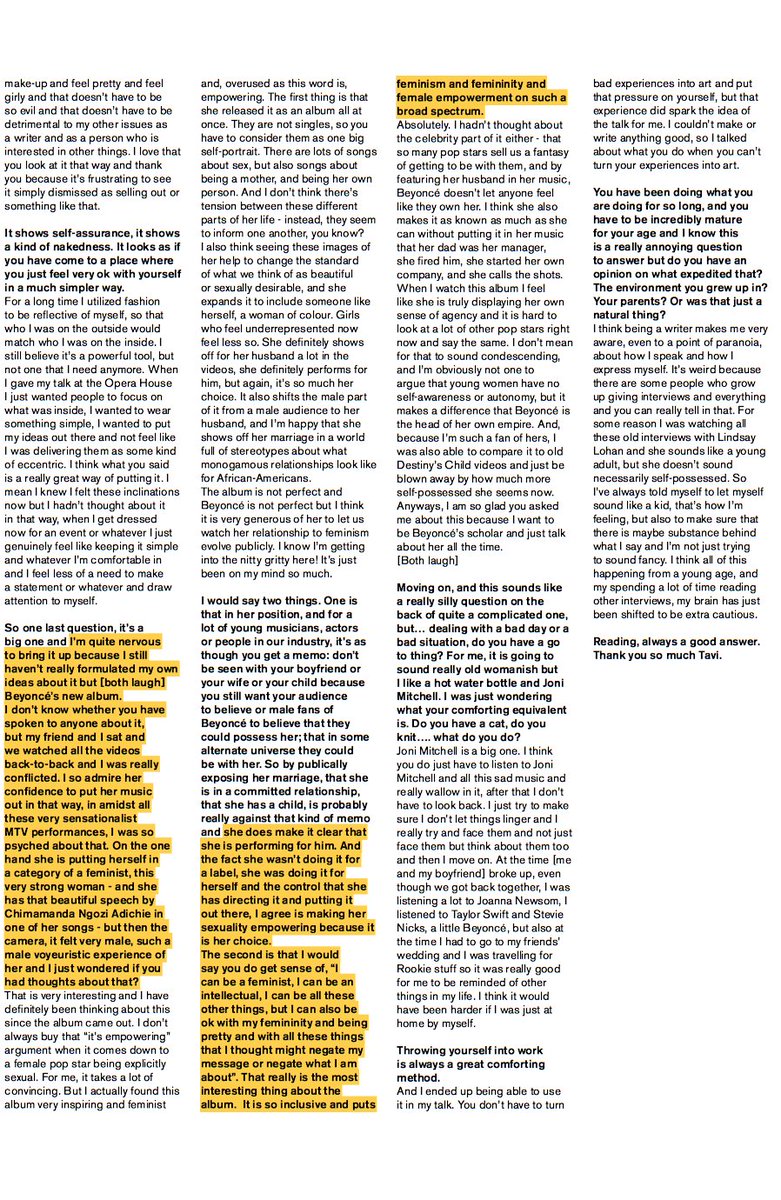 Watson highlighted a select portion in which it is made clear that she felt conflicted over her feelings toward Beyoncé’s explicit sexuality. “I’m quite nervous to bring it up because I still haven’t really formulated my own ideas about it,” she began.

“I so admire her confidence to put her music out in that way, in amidst all these very sensationalist MTV performances, I was so psyched about that. On the one hand she is putting herself in a category of a feminist, this very strong woman — and she has that beautiful speech by Chimamanda Ngozi Adichie in one of her songs — but then the camera, it felt very male, such a male voyeuristic experience of her,” said Watson.

She continues, “I would say that you do get a sense of ‘I can be a feminist, I can be an intellectual, I can be all these other things, but I can also be OK with my femininity and being pretty and with all these things I thought might negate my message or negate what I am about … That really is the most interesting thing about the album. It is so inclusive and puts feminism and femininity and female empowerment on such a broad spectrum.”

Though there was little text to clarify her intention in leaving the full excerpt from the interview, a closer read of her original words proves an admiration for the singer — and perhaps more positively, how it inspired a discourse about the true meaning of feminism between two young women.

It should also be noted that the two events came three years apart from one another, and that though Watson may have felt conflict at the time, she probably has a more clear view of her stance now.