Since 2008, the international party crowd has congregated in Mexico’s Playa del Carmen for 10 days of house and techno parties set against a beautiful paradise backdrop. Drawing more than 55,000 attendees last year (with more estimated this year), the BPM Festival’s eighth edition featured a formidable lineup of more than 375 artists playing at nine total venues. Boasting greater than tenfold growth in the span of six years, BPM’s founders have succeeded in bringing a diverse music-first and multi-venue festival experience to the Americas.

This year’s edition was not without some hitches, however, as a number of parties were shut down earlier than anticipated due to apparent permit issues with the authorities. For example, the Innervisions party at Blue Venado Beach Club was forced to end at 7 a.m., while artists like Danny Tenaglia and Marco Carola found their sets cut short at the Blue Parrot Beach Club. It’s an unspoken rule that house and techno headliners be allowed to play past announced end times, so some were none too pleased.

Is Panama the Next Hot Spot for EDM Festivals?

“I was planning to play until noon for you guys, but it looks like it can’t happen,” Tenaglia shouted. “Who wants to move this party to Acapulco?”

Despite those issues, most artists had positive things to say about this year’s festival. Mexican native Hector hailed BPM 2015 as one of his favorites, while Nicole Moudaber said the festival promoters “nailed it.”

“The vibe this year was flowing better than any other year’s I’ve been to,” said Moudaber. “Everyone was in such a great mood, ready and able to take the music to its fullest. I’m still buzzing from it.”

Billboard is too. Read below as we take you back to the Yucatán Peninsula to recap some of the best parties and standout sets from a memorable week in Mexico. 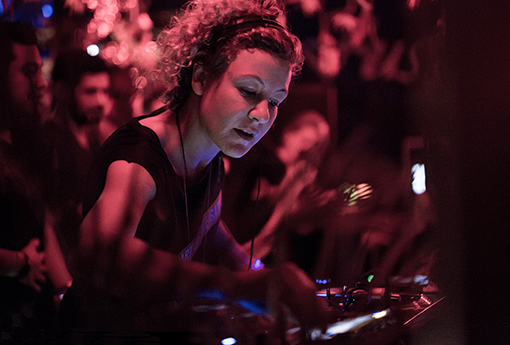 One of Ibiza’s most beloved day parties brought its beachside vibes from Sirocco Beach to Playa del Carmen for an eight-hour bonanza of bumping tech house. German turntablist tINI held court in an open-air booth structure adorned with green vines and dangling pink daisies while tequila-wielding girls circulated through the crowd in “Part of the Gang” tank tops.

“I was given this in Ibiza,” he chuckled. “People are gonna be asking me for drinks all night.”

Beachfront tech house can err on the side of mindlessly upbeat, but that fortunately wasn’t the case here. tINI’s crew tends to play an edgier, stripped-down style with rumbling bass lines and organic breakdowns that can just as soon entertain the attentive ear as provide a smooth background soundtrack to a beachfront blowout.

Enzo Siragusa, Fernando Constantini, Premiesku and Roustam built an enduring groove and maintained an upbeat vibe throughout the afternoon before turning over the reins to tINI, who curated a masterful sunset set of smooth and driving throwback tracks. The Munich native never disappoints. 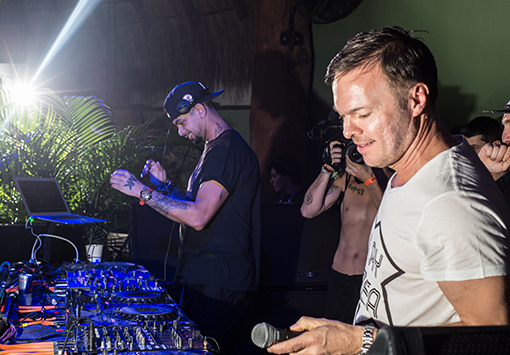 Pete Tong‘s All Gone showcase united such veterans as Detroit’s MK and Berlin’s Oliver Dollar with U.K. newcomers Gorgon City, Kidnap Kid and Disciples under one roof for a house-fueled fiesta on Wednesday.

The BBC Radio One host is a formidable club DJ in his own right, holding his own in a rollicking back-to-back set with MK (also known as Mark Kinchen) to close out the event. Dressed in a white tee emblazoned with the words “Play Area,” Tong alternated between groovy U.K. house and accessible vocal club cuts in an energetic performance that kept the Blue Parrot’s crowd continually on the move. Tong’s synergy with MK was on point throughout, which should come as no surprise given the consistent support he has given Kinchen throughout their careers.

“It’s cool that Pete Tong’s brand isn’t tied to any one sound,” noted an astute backstage observer. “As the times change, so can he.” 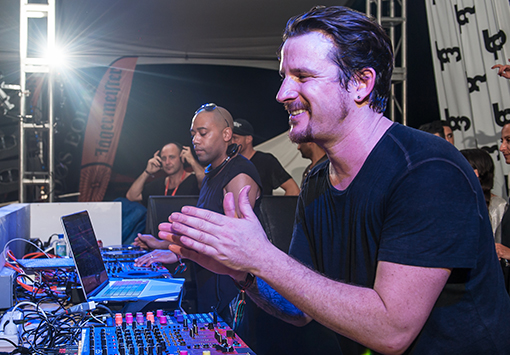 Luciano‘s Cadenza and Carl Craig’s Planet E imprints previously joined forces at Amsterdam Dance Event, and this year’s BPM attendees were treated to a reunion they won’t soon forget. Drawn in by the music, a crowd of locals even formed on the beach outside the venue to sip beers and groove along.

Luciano was in top form on Thursday, carefully layering tracks into an unyielding composite groove that ushered a packed Mamita’s Beach Club from day into night. The Swiss-Chilean artist soaked in the adulation of his dedicated crowd, throwing his hands skyward to clap along at various points before mixing in stomping bass lines to the delight of all assembled. Although his unconventional mixing approach relies heavily on looping, the upbeat and percussive set never felt stagnant and continually drove the dance floor forward.

Cheers rang out as Carl Craig appeared alongside Luciano in a sea of frenetic red strobes. After taking the decks, the Detroit legend launched into a tribal beat featuring pitched up African chants then transitioned into stomping techno.

Midway through the set, someone in the booth decided it would be a good idea to plop a giant floppy sombrero on Craig’s head. While some in the crowd cheered with approval, Craig continued mixing unamused until someone thankfully relieved him of it.

After a peak energy moment, Craig filtered down to a throbbing groove while a disembodied and guttural voice rang out. He slowly allowed the sound to build back up before bringing back the top end in the form of incisive percussion. Towards the end, he lapsed into a longwinded spoken word section prefacing a massive brass-supported techno drop that sent the sizable crowd into convulsions.

“He’s still got it!” shouted someone backstage. 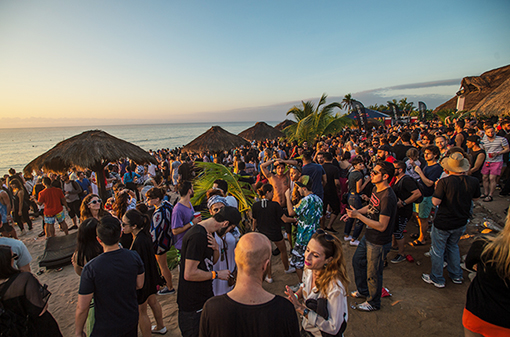 Last year’s Innervisions party at this secluded jungle venue was the culmination of seven straight days of torrential downpour. As Dixon ushered in sunrise, the rains finally ceased and attendees were treated to a stunning double rainbow that has been elevated by countless eyewitness accounts into a thing of BPM legend.

“I’ve been promoting parties since I was 17,” BPM co-founder Craig Pettigrew said with a broad smile. “I think that was the best party I’ve ever thrown in my life. I looked at Dixon; I walked him outside right before he started his set and I pointed to the sky like ‘you know, this one’s for free. I got this covered right here.’ I pointed at the double rainbows and he started crying. It was so special.”

While Innervisions was the only party at Blue Venado last year, the venue played host to five scheduled shows this year. Of course, none came close to the hype of Innervisions. It was the party on everyone’s tongue from the festival’s start. “See you tonight?” people would ask during the day on Wednesday. No need to mention where. Even the question mark seemed extraneous.

While there was no eclipsing the magic of last year’s edition, this year’s Innervisions showcase was memorable in its own right. Henrik Schwarz showcased his musical genius in a spellbinding set, while Irish artist Mano Le Tough brought moody house and driving techno to the expectant masses. Dixon delivered another jaw-dropping sunrise showing as only he can, weaving ethereal melodies and tribal rhythms together in a sonic tapestry that seemed to shift along with the pewter and amber sky.

Word began spreading that the show was going to be cut short at 7 am. While many made a beeline for the exit right when the music ended, those who stayed were treated to a truly idyllic scene on the shoe-strewn beach. Smiling ravers in bohemian jewelry bathed in the Caribbean’s warm and salty waters. Separated friends found one another in ecstatic embraces. Strangers became companions as conversations spread along the shore. The absence of music actually lent the scene a strangely refreshing feel. We were all still giddy from the sunrise, and for once, we could actually hear each other speak.

That carefree joy was soon checked by an ugly reality developing in the jungle below. Our group departed the venue just as a grim phalanx of armed police vehicles roared in. We elected to traverse the winding path to civilization on foot and soon overtook the cabs that others had hailed. Nervous eyes darted behind smeared glass windows as callers tried in vain to get cell signal. Once we reached the roadside, we saw the cause of the hold-up. The Policía Municipal had choked off the traffic flow with a foreboding checkpoint to deliver comprehensive searches to every departing passenger. The shoes that once had peacefully dotted the beach above were now being carefully inspected for contraband substances. The atmosphere was understandably tense.

Fortunately, we’d befriended a local staffer who essentially smuggled us through the chaos, coordinating with taxi drivers in strenuous Spanish as they aided our escape. The police were too preoccupied patting down ravers to notice our ragtag band slip past onto the road, where we piled into a taxi and took off. As we sped away to safer harbors, we saw a handful of apparent arrests taking place. We later heard that some festivalgoers were held in Cancún for hours without charge.

“There has never been a bust like this before,” the staffer said, shaking her head. “How dare they do this?”

Before it became Hector’s budding party brand, Vatos Locos began as an inside joke.

“Vatos Locos is a very Mexican thing, it means like a gang or a group,” he explains. “It was very natural and it started with people like Dubfire and the guys saying it all the time. I made a bootleg and I put the name Vatos Locos on it, and now everywhere I go people show up with flags. I’ve even seen original tattoos!”

After test-driving the concept with an afterhours at Winter Music Conference, the Guadalajara native hosted his first full-fledged Vatos Locos party at BPM this year. Featuring close friends Chad Andrew, David Gtronic, Javier Carballo, Pinto, Randall M and Sece on an alphabetical billing, Hector makes it clear that Vatos Locos is more about brotherhood than hierarchy.

“The main thing is I want to invite only my friends,” says Hector. “I want to have my boys there, the guys whose music I’ve been supporting. There’s no attitudes, no egos.”

Hector has become a fixture at the festival, which he believes has played an important role in exposing Mexicans to house and techno music.

“I can see it in the streets!” Hector exclaims. “If I go to the tacos now, I get a lot of people being like ‘Vatos Locos!’ It’s very important to have Mexican DJs supporting BPM. It’s working well, I’ve already seen some of the showcases.”

His own showcase went swimmingly. After succeeding Pinto on Saturday, Sece warmed up the show with tight and percussive beats, providing a minimal and easygoing opening soundtrack as the crowd trickled onto Canibal Royal’s beachfront. Canary Islands export Javier Carballo took the decks next, mixing stripped down techy offerings like DHS’s “I Am Your Control” and Djebali’s “Ideal Juice.”

Hector’s hometown crowd showed up in full force to enjoy his two-hour closing set, which saw the DJ deliver a throwback vinyl set that ranged from pensive minimal beats to funk-infused classic house cuts. Finishing strong with Paul Johnson’s “Get On My Camel,” and Riva Starr’s remix of Harry Romero’s “Tania,” Hector drew a well-deserved ovation as he filtered down the finale.