“Do you mind if I eat a little?” Jared Leto asks. “I’m trying to gain a lot of weight. It means I have to eat every couple of hours — and I’m terrible at eating a lot.” Leto, 43, is sitting on a battered circular couch in a cavernous white room on the ground floor of his Hollywood Hills home. A takeout container filled with vegan tacos sits before him. Leto’s accessorized with red-and-purple socks, a woolly ski hat and a red fanny pack, for a look that is more Phish parking lot than red carpet. His beard and hair extend to Old Testament length. 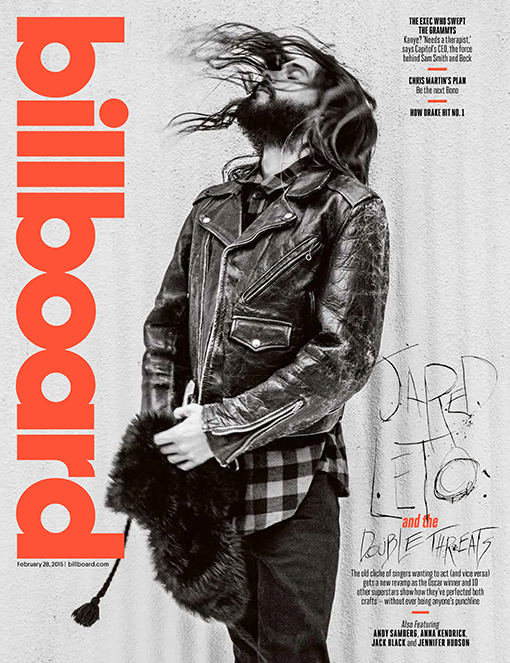 Leto’s packing on the pounds because he has been cast as the Joker in the all-star comic-book supervillain movie Suicide Squad, which starts filming in April for a 2016 release. He gained more than 60 pounds to play Mark David Chapman (assassin of John Lennon) in 2007’s Chapter 27 and starved himself to play a junkie in 2000’s Requiem for a Dream. “It can be an incredibly rewarding, but also destructive, thing to do,” he says of yo-yoing between weight classes for a role. “Your body changes forever.” He has had a lot of actors call him for advice on extreme weight regimens, he says, “and I always try to talk people out of it.”

Actors and musicians have long coveted each other’s careers. But today, when they leverage their brands to break into the other field, these hopeful hyphenates do better than one might assume they have any right to: Jennifer Hudson has an Oscar, Jack Black’s Tenacious D won a Grammy, and Carrie Brownstein might be the funniest person in the history of indie rock. Leto, however, is arguably the leading double threat. He won a best supporting actor Oscar in 2014 for portraying the transgender, HIV-positive Rayon in Dallas Buyers Club. As a musician, he has led rock band Thirty Seconds to Mars to 2.4 million albums sold in the United States, according to Nielsen Music. (The act, which has yet to re-sign with a label after breaking away from Virgin in 2014, is spending March playing 14 shows in Russia. “We do the same thing in Germany, Italy, France,” Leto says. “We play 20 dates in 20 different cities.”) He’s also a director and a film editor, not to mention a tech entrepreneur who founded the video platform Vyrt and was an early investor in Nest, which Google bought for $3.2 billion in 2014. “Many, many actors have tried to cross over into music-land,” says Irving Azoff, Leto’s manager and chairman/CEO of Azoff MSG Entertainment. “The reason Jared succeeded was he actually gave up his movie career. He’s a rock star moonlighting as an actor. And he’s got a work ethic unlike anybody I’ve ever seen.” Says Leto, with a grin: “I’m terminally dissatisfied. That’s probably part of being an artist.” Leto onstage with 30 Seconds to Mars

Leto was born in Bossier City, La., in 1971. He and his older brother Shannon — now the drummer for 30 Seconds to Mars — were raised by their divorced hippie mother, who trotted the family around the globe, including Haiti, where they operated a free medical clinic. After a stint at the School of Visual Arts in New York to study filmmaking, Leto moved to Los Angeles at age 21, and soon won a role on the TV show My So-Called Life as Jordan Catalano, the bad boy beloved by Angela Chase, played by Claire Danes. A few years later, Shannon joined him in Los Angeles. Leto’s epiphany: “No one has to give you permission to make music or make art.”

Leto believes he has more skill as a musician, just because “I’ve been onstage more hours than I’ve been in front of a camera.” And music has proved more lucrative than movies. “I’ve never made money from films,” he declares. “It’s a challenge to make money from music these days — that’s one of the reasons I’ve been really entrepreneurial.” He takes pride in Thirty Seconds to Mars being self-sufficient, making videos and even issuing tickets with its own team. “All our digital marketing and social media was done in-house before people even knew what those terms were,” he says. The band’s fan group, which calls itself “The Echelon,” holds an annual international convention (Echelon Conference: The Gathering) and has raised funds for disaster relief in Haiti and Japan. (Fans also mobilized in 2014 to vote more than 3 million times in Billboard’s “Fan Army Face-Off,” in which the band ultimately placed second.)

Leto is guarded about his personal life, and his last long-term relationship, with Cameron Diaz, ended in 2003. In the last few months alone, gossips have linked him with the actress Lupita Nyong’o, Dutch model Dimphy Janse and Miley Cyrus, but he brought his mother as his date to the 2014 Oscars ceremony. He says he has never seen Claire Danes’ CIA drama Homeland, but only because he watches almost no TV. Still, he’s open to returning to TV as an actor: “I understand now the pleasure in consuming a story that doesn’t end after 90 minutes and the ability to work on a character that long.” He has, however, consistently declined offers to star in rock biopics and turned down roles in movies that promised to put his music on the soundtrack, because he doesn’t want to promote one career on the basis of the other. “When we first signed a record deal in ’98, it was like breaking a commandment.” he says, explaining that he was wary of how people were judged for trying to cross over. “Now, if you can talk, you put an album out.” What drew him to the Joker for just his second film role in seven years? “The opportunity to take on this nearly Shakespearean character — that’s what graphic novels and comic books are becoming, right?” Leto never actually says the words “the Joker” out loud, as if the very name might summon the ghosts of Heath Ledger and Cesar Romero. “This beautiful disaster of a character — what a big challenge,” he muses.

Leto is known for seeking out dark material and immersing himself in his roles. Dallas Buyers Club director Jean-Marc Vallee says, “At the beginning, I was scared of him and Matthew [McConaughey, Leto’s co-star]. I’m from the less-is-more school, and these guys were doing more-is-more. But I was using their more-is-more takes.”

During his conversation with Billboard, Leto quotes everyone from Mahatma Gandhi to Milton Berle. The theme across the quotations: persistence. Ruminating on the skepticism that greeted Thirty Seconds to Mars, Leto drops one more: “Oscar Wilde said, ‘The greatest revenge is massive success.'” Wilde didn’t say that, actually; Frank Sinatra, one of the all-time great double threats, apparently did. But with massive enough success, you can make Oscar Wilde say whatever you like.