Since 2006, 1500 or Nothin’ has played an integral role in writing, producing and/or playing for superstars such as JAY-Z, Kanye West, Bruno Mars and Kendrick Lamar. Beyond its hit-filled portfolio, however, the Grammy Award-winning collective is laser-focused on paying that success forward through its 1500 Sound Academy.

Dedicated to providing a career pathway for the next generation of creators and players, 1500 Sound Academy recently announced a new partnership with the Los Angeles Urban League to fund scholarships for music students from African American and other underserved communities beginning in 2022. This is in addition to the academy’s ongoing annual scholarship initiatives in partnership with musical instrument companies Roland and Fender. 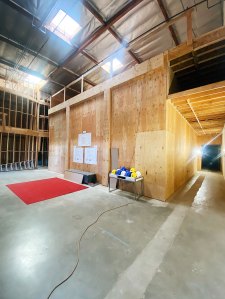 Fauntleroy, who is also president of 1500 or Nothin’, says music stands at the core of the trio’s vision for the academy. “But there’s also music literacy, scoring, coding and graphic design,” he tells Billboard. “We want the students to learn as many [music education] languages as possible.”

Adds 1500 or Nothin’ CEO Dopson, “Our message is also about ownership. “It’s not OK to walk in with 100 percent and then walk out with only 15 percent.”

That sentiment is what inspired the acquisition of the former customs inspection building that’s now the home of 1500 Sound Academy. The school is a subsidiary of Volume Ventures, LLC, an independent, multi-faceted entertainment company that provides comprehensive music and video production, publishing and education services to aspiring and established recording artists, songwriters, musicians and music videographers.

Located adjacent to the first-floor lobby are four private training rooms, an administration office, the 1500 Sound Academy stage for student jam sessions/showcases and an SSL recording studio. The second floor is devoted to two classrooms that each host 30 students. 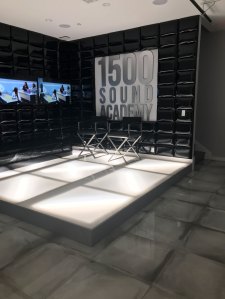 Two of the training rooms are sponsored by Fender and Roland. In their ongoing alliances with the academy, both Fender and Roland provide their latest product offerings and gear to assist students in learning and experimenting within a studio environment. The academy’s additional brand partners include Dolby, Zildjian, Vizio and, more recently, YouTube and Victrola.

The academy’s scholarship program with #YouTubeBlack Voices Fund is a multi-year commitment dedicated to spotlighting and growing Black creators and music on the YouTube platform. Through its association, Victrola has provided Revolution GO portable record players and curated the 1500 Sound Academy Collection. Comprised of more than 100 albums, the collection gives students the opportunity to learn about popular music from the 20th century to now encompassing jazz, rock and roll, R&B, civil rights anthems and rap/hip-hop.

Feb. 1, 2022 marks the start of the academy’s next six-month, On-Campus and Live Online Music & Industry Fundamentals Program. In addition to open enrollment throughout the year, there is an option for On Demand online courses as well.

The curriculum runs the gamut from music and financial literacy to branding, marketing and vocal training taught by a faculty of industry professionals that includes Dopson’s father, “Pops” Lawrence Dopson. Timbaland, Roddy Ricch, Saweetie, George Clinton and Battlecat are among the artists and musicians who have doubled as guest speakers. More than 49 students have earned graduation certificates since 1500 Sound Academy’s launch in 2019. 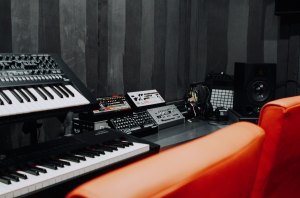 The last link that will complete the Sound complex is Volume Studios. Still under construction, the state-of-the-art facility will cater to the production needs of major entertainment personalities by offering three recording studios, a screening theater, soundstage, an outdoor stage and a podcast room. The outdoor stage will be unveiled on Jan. 15, 2022, which has been declared as 1500 or Nothin’ Day in Los Angeles. Remaining construction will wrap in the second quarter.

Dopson and Fauntleroy, however, contend they’re just getting started when it comes to educating, mentoring and developing the next generation of sound creators. Future goals include getting more women involved with the academy and ultimately within the industry as well as getting the program fully funded so that it’s free for every student.

Notes Fauntleroy, “We came from humble beginnings and survived an extremely treacherous industry. Now we want to give aspiring creators more direction and an easier path. After that, imagine what they can produce.”

“There’s so much other shit that people didn’t teach us,” adds Dopson. “So this is about giving back and doing the right thing. We’re sound freaks who want to be the bridge for that gap.”