Maná’s residency at the Los Angeles Forum is growing.

Last week, the Mexican rock group announced a “residency” that would have them performing exclusively in 2022 at the Los Angeles Forum, with shows to be added as long as the group sold out existing dates. Now, after selling out their first four announced shows, amounting to 45,000 tickets in just two hours, the group is adding two new shows, set to take place June 24 and 25.

Tickets will go on sale Nov. 23 at Ticketmaster.com.

With the four sell-outs, Maná becomes the act with most full houses at the Forum – 15 – since the venue’s reopening, besting the record previously held by the Eagles with 12.

Mana Will Play 'Unprecedented' Exclusive Residency at LA Forum in 2022 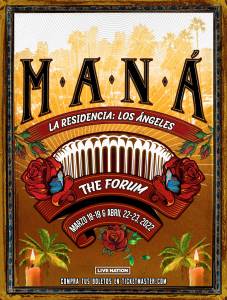 Produced by Live Nation, tickets to the run of shows go on sale Nov. 19 on Ticketmaster for four dates — March 18 and 19, and April 22 and 23 — with new weekends added every month on a rolling basis until fans literally stop buying.

At the time of the announcement, Maná frontman Fher Olvera told Billboard no night would feature the same set list or the same guests, a nod to diehard fans who may want to go to several shows.

“Mana’s presence within Los Angeles and their live history at the Forum is immense, amongst any genre. Being able to conceive a pinnacle experience of this nature in both the Forum’s as well as the band’s history, is beyond anything we have done since our 2014 renovation,” Geni Lincoln, GM/SVP of booking for the Forum, told Billboard.