The finches and jays banter in the oak trees above — but Ziggy Marley has chickens on his mind. As a toddler in Kingston, Jamaica, where he was born the ­second child to Rita and Bob Marley, ­chickens would cluck through the yard behind the family’s tiny zinc-paneled home. “We grew up getting our own eggs, and there were goats, banana trees, a garden in the back,” says Marley, 47, the ­memory giving way to a smile ­reminiscent of his father’s. The living was modest for the family before the reggae legend rose to international fame in the late 1970s: “We used to all sleep in one room, some on the bed and some on the ground” — but it was, by Ziggy’s account, “good living.”

It was also a world away from where he sits today, beside an hourglass-shaped pool in a 3,828-square-foot home nestled in one of Beverly Hills’ most ­private enclaves. Stars like Nicole Kidman, Jennifer Lawrence and Nicole Richie, who paid a reported $6.7 million for her home in April 2015, are among those who also live on the secluded street high in the hills. Yet despite all the surrounding cachet, the property holds a different sort of magic for the seven-time Grammy winner who was born David Nesta Marley (Ziggy was a nickname given by his dad).

He and wife Orly Agai, a former vice president at William Morris, had been eager to move out of her two-bedroom West Hollywood condo for nearly a year before Marley spotted the four ­bedroom, four bathroom home with a guest house online in 2004. “I’m vibe-y,” he says. “Places speak to me and I’ll just know, ‘This is the spot.’ Orly was ­pregnant with our first child and getting anxious. She had a real estate guy looking and I said, ‘Just let me look.’ We came here, walked out back and said, ‘Oh yeah, this is the spot.’ Just like that. That was it.”

Built in 1956, the ranch-style home with Mediterranean touches was renovated in the early 2000s by architect Gus Duffy, whose past clients include Kurt Russell and Kareem Abdul-Jabbar, and builder Gordon Gibson, who intended to keep the home for himself. Though an undisclosed rapper rented it for a few years, adding little more than a few pinball machines, the space had been virtually unlived in when it went on the market. Dozens were interested, but Gibson’s ­decision on the future homeowner ultimately boiled down to Marley’s spirit. The musician recently had played a charity show for a surfer named Jesse Billauer who had been in an accident that rendered him quadriplegic. Gordon ­personally knew Billauer and felt the Marleys should have the home. Good karma has been present ever since. Soon after moving in, Marley, who was raised Rastafarian, and Agai, who is Jewish and Israeli with Iranian roots, were ­married in the living room before 30 of their closest friends and family. They have four ­children, the youngest a newborn and the eldest 11 (Marley has three from previous relationships), with whom the hands-on dad loves to jump on the couch. “My wife don’t like us messing up the house, but that’s the fun stuff, man,” he says. When they aren’t monkeying around indoors, they’ll play soccer out back — a sport Bob, who died when Ziggy was 12, loved — or hike to the nearby state park where Ziggy jogs three times a week.

In lieu of hiring an interior decorator, the couple have spent the past decade ­collecting treasures for each room — beginning with rare Persian rugs. “Even before we had a chair, [Orly] was like, ‘Persian rugs!’ ” says Marley with a laugh. “We had a Persian rug before we had a bed.” Hermes scarves, which were acquired from auctions and eBay through the years, are framed on the living room and bedroom walls. An inlaid Syrian card table with Star of David details sits beneath a wall of family ­photos. “Everything was done with feeling. Everything was ‘this speaks to me, let’s get it,’ ” says Marley. “That’s the best way to put your house together.” (For a larger image of Marley’s family photo wall, click here).

(To find out details on Marley’s family photo wall below, mouse over the image.) 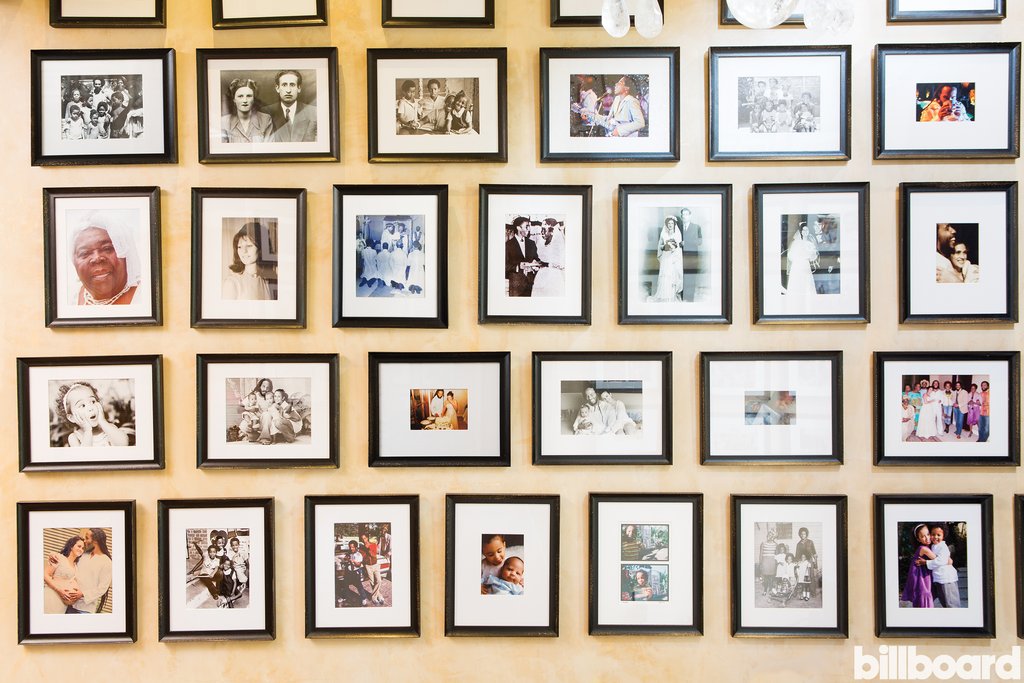 Much of his time this past year has been spent in the home recording studio (originally a garage) where he tracked and produced nearly every song on his self-titled sixth studio album, due May 20 on Tuff Gong Worldwide. The songs, he says, were derived from ideas that had been incubating in his mind for the past 20 years, and then materialized in rooms throughout the house. “It’s the most complete record for me, but the music is always evolving,” says Marley, who will embark on a 35-city North American tour at the end of May. “That’s the good thing about performing it — I can fulfill my dream of what it is today and not what it was yesterday. The album is a moment in time, and life is now.”

And right now, it’s time to harvest the cucumbers from a garden ­outside of the kitchen, where tomato vines and pepper plants, garlic and strawberry leaves abound. “I don’t think of home as a building, I think of nature. One day I’d like to have a farm, but until then,” he says, glancing over at the plot of produce not so different from the one he grew up with, “this will keep me sane, this will keep me connected.”

This article was originally featured in the May 28 issue of Billboard.