John Fogerty is ­sipping tea from a plaid mug inside his home recording studio when he suddenly gets a little ­emotional. It’s a sunny Wednesday afternoon in Thousand Oaks, Calif., and the studio space, with its candlelit stone walls and rustic wooden beams, feels more like a ranch that belongs in Big Sky Country than an estate 35 miles outside of Los Angeles. At 71, his face is more deeply lined than it once was but little else has changed. He’s wearing a beat-up pair of Levi’s and a handkerchief tied around his neck, and if you didn’t know him to be a living rock legend, you might peg him as the ­flannel-wearing down-to-earth host of a wildlife show on PBS. But surrounding Fogerty today are the guitars that helped him create the Mississippi Delta-inflected music of Creedence Clearwater Revival — a sound that would land him five top 10 albums on the Billboard 200 and weave him into the DNA of a ­politically charged Vietnam-era America.

At the far end of the room sits the Rickenbacker he played at Woodstock (“I started with ‘Born on the Bayou’”), and beside him rests a highly coveted Les Paul Custom “Black Beauty” that was used to record “Bad Moon Rising” and “Lodi” in 1969 (“I don’t tour with that one; it’s iconic to me”). With time the wood has dried, the glue has hardened, and the value has increased substantially: the Les Paul that retailed for $545 is now likely worth an estimated $10,000. “I still take them out because they sound better with age,” says Fogerty who owns upwards of 300 guitars. “Through the years I’ve kept the ­directive that when a song is crying for a certain ­guitar, get that guitar. Make what you’re doing more interesting.” The Beatles, he says, “did it naturally; it always made sense — Madonna just changed her hair.”

What has him momentarily choked up though is one of the newest instruments of the bunch: a dense-mahogany, blue-plaid-emblazoned Les Paul Custom that was gifted by his wife and manager, Julie, whom he married in 1991. “The plaid represents so much to me, especially in her eyes. She thinks it defines a lot of my unspoken character traits. It kind of stands for me — the simplicity, the quality, the consistency. So she had this guitar made,” says Fogerty, who has worn the pattern since he was a kid delivering newspapers in El Cerrito, Calif., trying to save up for a $39.95 Silvertone single-pickup guitar from Sears. “When I put this on…” He closes his eyes for a moment, visibly moved. “There is a lot of feeling here. It’s a love letter between her and I.” 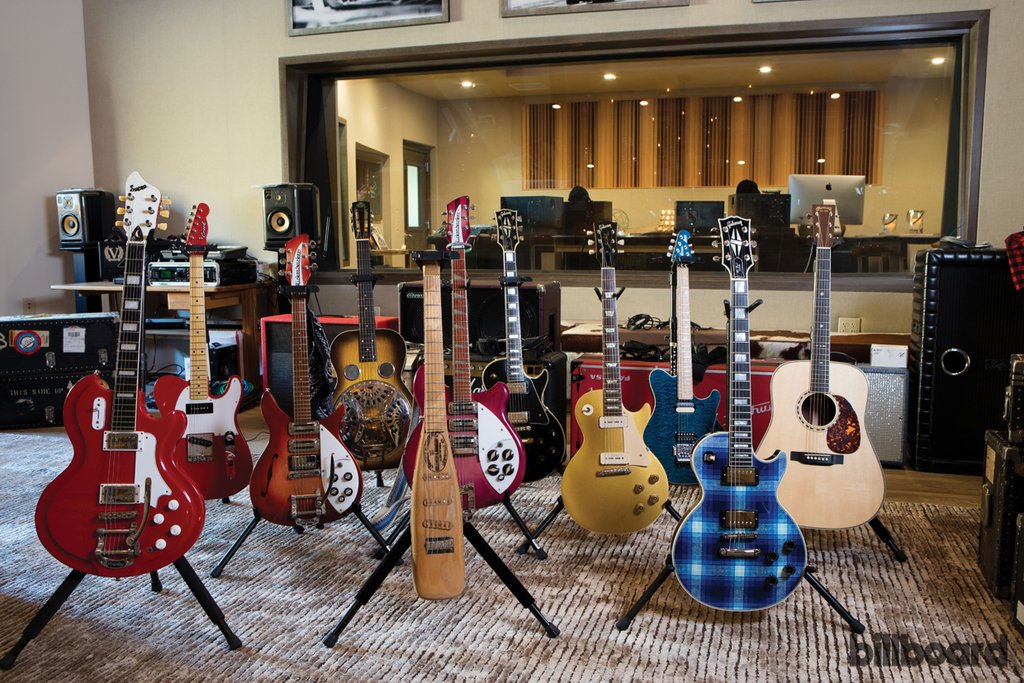 It is also part of the rig he has been using to perform onstage alongside his 25-year-old son, Shane, whose ­mastery of Creedence’s catalog has been on full display as the duo hit the road for its Fortunate Son tour in 2016. Shane’s ­journey as a musician, much like his father’s, can be traced through his six strings. There is the cheap Squier Strat he started on and the red Supro he bought with his own money at 16. Of the custom Martin ­acoustic made from Adirondack pine on which he played 2013’s “Mystic Highway” for the first time, Shane says that he hopes “to have it my whole life, to age with it.”

Like most in his collection, the Martin has rare traits and upgrades that not every young musician has access to. “Since my dad is who he is, he talked to some of the guys and got them to make my dream ­guitar,” says Shane, who also performs with brother Tyler in the psych-rock group Hearty Har and will release a series of new singles at the end of the year. But when he tries to credit the luthiers with the sound quality and design, Fogerty jumps in. “He’s being too ­modest,” he shakes his head. “Sometimes I’ll be in a room and he’ll be playing and I’ll stop and go, ‘Wow, that is really beautiful.’ It’s a rare thing — there’s that extra-special part where the guitar is connected to Shane and the way he plays.”

The eldest of John and Julie’s children, Shane developed a relationship with music as his father was preparing to release the Grammy-winning Blue Moon Swamp in 1997. “He was playing back one of the tracks, ‘Hot Rod Heart,’ in our living room — and every time Tyler and I heard it, we’d run around the couch,” recalls the University of Southern California grad. “I remember being happy to hear him sing. I wasn’t old enough yet to be like, ‘That’s my dad. That’s not cool.’ ”

Julie, with whom John has three kids, eventually suggested they start playing together. “I’m always a little bit too worried about critical professionalism, and that’s sort of what drives me. I’ve used that my whole life,” says Fogerty. “Luckily, she talked me into it. We worked out a couple of songs, and in no time at all Shane was doing the lick from ‘Up Around the Bend.’”

Onstage, they bounce off one another just as they do in their studio, where Fogerty is gearing up to record his 12th solo album in January. As they banter like old pals about Jimi Hendrix’s ability to tune a guitar down in front of a crowd and Charlie Puth’s record (John liked it, Shane didn’t), the only thing able to interrupt their synergy is Creedence — the family’s 4-month-old golden retriever. When she busts into the room and begins sprinting in circles around the guitars, for a moment it looks as though music history might come ­toppling down.