Zac Brown Band will kick off its 2022 Out in the Middle Tour on April 22 at Bon Secours Wellness Arena in Greenville, S.C.

“Performing in front of millions of fans around the world is one of the most electrifying and humbling feelings,” Brown said in a statement. “We’re so excited to go back out on the road and keep the unbelievable momentum going from [2021’s] ‘The Comeback Tour.’ It’s been such an incredible year for the band, debuting some of the best music we’ve ever made, and we are thrilled to continue playing live for our amazing fans.” 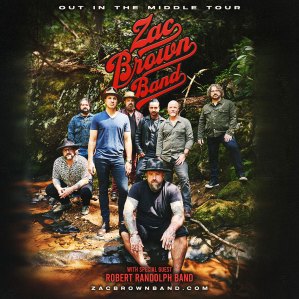 Caroline Jones, who performed as a special guest with Zac Brown Band during The Comeback Tour, will once again join the band. The Robert Randolph Band will open the majority of shows with other support acts to be named later.

The tour comes after Zac Brown Band returned to the top of Billboard’s Country Airplay chart for the first time in five years in November with “Same Boat.” The song was the group’s 14th No. 1 and its first chart-topper since the act signed with Warner Music Nashville.

A presale for Citi cardmembers begins Jan. 18, following by a presale for Spotify and LiveNation on Jan. 19.  Tickets go on sale to the general public beginning Jan. 21 at ZacBrownBand.com.