Spotify selects the acts based on who they feel will appeal to their listeners, data garnered from their playlists, and where the burgeoning artists are in their development, says Spotify’s Rachel Whitney, head of editorial, Nashville. A number of the indie artists first came to Spotify executives’ attention through its playlist submission tool, and their songs ended up on Fresh Finds Country playlist, a list dedicated to unsigned artists, she adds. 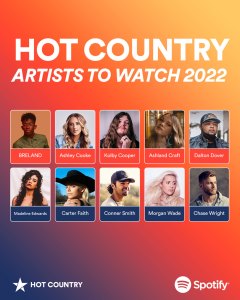 In addition to bragging rights, the acts will be featured on a number of playlists, including Hot Country, as well as a Nashville billboard touting this year’s class. The artists also will be in contention for brand collaborations and opportunities across the platform, “from artist initiatives such as Spotify Singles to marketing campaigns to emerging artist programs like RADAR to podcasts and more,” Whitney says.

BRELAND said in a statement, “Being a Hot Country Artist to Watch means being recognized by one of the best platforms for consuming music, and country music especially. Just being able to be on that list with all those other incredible artists is special.”

Wade added, “Being a Hot Country Artist to Watch is an honor for me because I know how much impact it has. There’s such an immediate audience who learns about me, about the album, and most importantly about my songs as a result. I’m grateful to be included.”