Forever No. 1 is a Billboard series that pays special tribute to the recently deceased artists who achieved the highest honor our charts have to offer — a Billboard Hot 100 No. 1 single — by taking an extended look back at the chart-topping songs that made them part of this exclusive club. Here, we honor the late Olivia Newton-John, who died this week at age 73, with a look back at her fifth and final No. 1: “Physical,” the most iconic solo hit of her storied career, and one of the defining smashes of the 1980s.

There’s a decent argument to be made that “Physical” was the No. 1 single that kicked off the ’80s in earnest. Not to say that the decade hadn’t already produced its share of epochal Hot 100-toppers by the time of the song’s late 1981 release, but many were still produced in a post-disco ’70s hangover, or represented the kind of safe, classic balladry that top 40 tends to default to when it’s not sure what else is going on at the moment. “Physical,” on the other hand, set the tone for the mainstream pop of the decade to come: glistening synths, whip-smart guitars, grooves faintly reminiscent of (but not overpowered by) funk and disco, sultry sax, and catchy, clever lyrical hooks that teeter on the edge of tasteless without ever falling onto the wrong side.

And the song was only half the story. “Physical” debuted on September 28, 1981, less than two months after the seismic launch of MTV, and oh boy did it have an accompanying visual ready for the occasion. So did the rest of its parent LP of the same name, actually: Physical was released as a whole video album, a pioneering practice in ’81, which earned Newton-John a primetime Let’s Get Physical TV special (and, eventually, the second-ever video of the year Grammy.) But the title track’s clip was the crown jewel. Set in a gym that looks more like the final level of an early arcade game — the kind of sharply geometrically defined, impossibly shiny-surfaced room that only seems to exist in ’80s music videos — Newton-John leads a group workout with a bunch of oiled-down muscle men, who inexplicably turn into overweight klutzes (and then back again) over the course of the video. It’s campy, it’s sexy, and it’s totally incomprehensible from a narrative standpoint. In other words, it was perfect — particularly from the vantage of early MTV, where the golden rule was quickly established: Ensure that nobody can ever hear your song without also picturing the video again.

Of course, none of this is what anyone was expecting from Olivia Newton-John in 1981. She had spent the ’70s as the wholesome good girl at the heart of AM radio, soft and gentle and certainly inoffensive. Her Sandy character’s famous “tell me about it, stud” pivot to cigarettes and black leather at the end of 1978’s cartoonishly successful Grease — a visual transformation continued on the cover to her Totally Hot album later that year — had presented her in a more adult light. But that was still throwback family entertainment at heart, closing with her and John Travolta’s Danny literally driving off into the sky together. The “Physical” video, on the other hand, ends with Newton-John’s scantily clad iron-pumpers mostly coupling off together and leaving the gym hand in hand, perhaps headed to a different kind of workout. This was uncharted territory for Australia’s sweetheart.

But a reinvention was perhaps necessary for the ’70s superstar at the onset of a new decade. Totally Hot tread water commercially, reaching the top 10 of the Billboard 200 albums chart but spawning just a single Hot 100 top 10 hit in the No. 3-peaking “A Little More Love,” and her 1980 duet with fellow solid-gold ’70s hitmaker Andy Gibb “I Can’t Help It” had missed the top 10 entirely, stalling at No. 12. Newton-John found greater success — including her fourth Hot 100 No. 1 — with the soundtrack to Xanadu, the film musical fantasia that marked her first feature role since Grease, but the movie itself was such a commercial and critical failure that it was essentially a wash for her momentum-wise. She was in need of a new sound and a new image to mark a new phase of her career.

She found inspiration for both in a relatively unlikely source: the fitness craze that was sweeping the globe, particularly America, in the early ’80s. It was the era of Richard Simmons, Jane Fonda and Jazzercise, and both the look and language of the moment proved an inspired fit for Newton-John’s comeback. She donned spandex, a headband and a more economical, Princess Diana-reminiscent haircut in the video, while the motivational speak of aerobics classes informed — and offered plausible deniability for — the song’s otherwise sexually forward chorus hook, “Let’s get physical, phy-si-cal… let me hear your body talk.” Other lyrics in the verse were less ambiguous, but the song’s workout framing provided just enough double to the entendre for most programming directors to look the other way on what one PD referred to in Billboard as “an uncomfortableness” that the song produced in their listenership.

It helped the song’s case that it was an undeniable winner. The “Physical” groove, anchored by storied studio drummer Carlos Vega’s muscular shuffle and flecked with longtime ONJ producer John Farrar’s guitar pops, is as slick and taut as one of its video’s hairless bare chests. And just as she does with her workout buddies in the clip, Newton-John slithers around the beat with sly but unmistakable intent, not so much seductive as lascivious as she remarks with increasing impatience, “I took you to an intimate res-tau-rant, then to a suggestive movie/ There’s nothing left to talk about, unless it’s… ho-ri-zon-tal-ly.” There’s a hint of stalker-movie suspense to the verse, an obvious tension lurking beneath the surface of those guitars and Olivia’s repeat “You know what I mean” insistences. “Physical” was first penned by Steve Kipner and Terry Shaddick for Rod Stewart, and it’s not surprising that it was originally envisioned from a male perspective — women rarely got to play the hunter and not the prey in turn-of-the-’80s pop. But that’s part of the thrill of Newton-John’s rendition: the scandalous notion that even while she was sighing about being hopelessly devoted to you, this might actually have been what was going on in her head all along.

Of course, the verses are just the wind-up for That Chorus: a five-star KO that you’d still remember 40 years later even if you only ever heard it once. “Let’s get physical,” a rising Newton-John commands, before repeating the last word in descending cadence — “PHY-suh-cal” — as if she’s worried you might need the message really spelled out for you. And then, just in case, once more: “I wanna get PHY-SI-CALLLLL!!!” As the guitars and saxes get growlier, she transitions similar phrasing to her next message: “Let me hear your body talk/ Your body talk.” It works not only as an expansion of the “physical” idea in the chorus’ first half, but as a callback to Newton-John’s frustration throughout the verse at the insufferable degree of more conventional mouth-talking transpiring; now she wants to hear what your other parts have to say. Smart, tough, playful and immediately unforgettable, it’s everything a great pop chorus should be.

The whole “Physical” package quickly proved to be an unstoppable phenomenon. It debuted at No. 66 on the Hot 100 dated Oct. 3, 1981; by Nov. 18 it was No.1, replacing “Private Eyes” by Daryl Hall and John Oates, another duo of recently re-fashioned ’70s survivors. It ruled for the rest of 1981, and well into 1982 — 10 weeks in all, tying the record (previously set by Debby Boone’s “You Light Up My Life” from 1977-78) for the longest run at No. 1 in Hot 100 history — before being dethroned by, coincidentally enough, Hall & Oates again with “I Can’t Go For That (No Can Do).” It sent its parent album of the same name to RIAA-certified double-Platinum status, and established Newton-John — alongside perhaps only Debbie Harry of Blondie, whose “Rapture” back-to-back slinking she briefly borrows in the “Physical” clip — as a pre-eminent pop star of MTV’s earliest days. 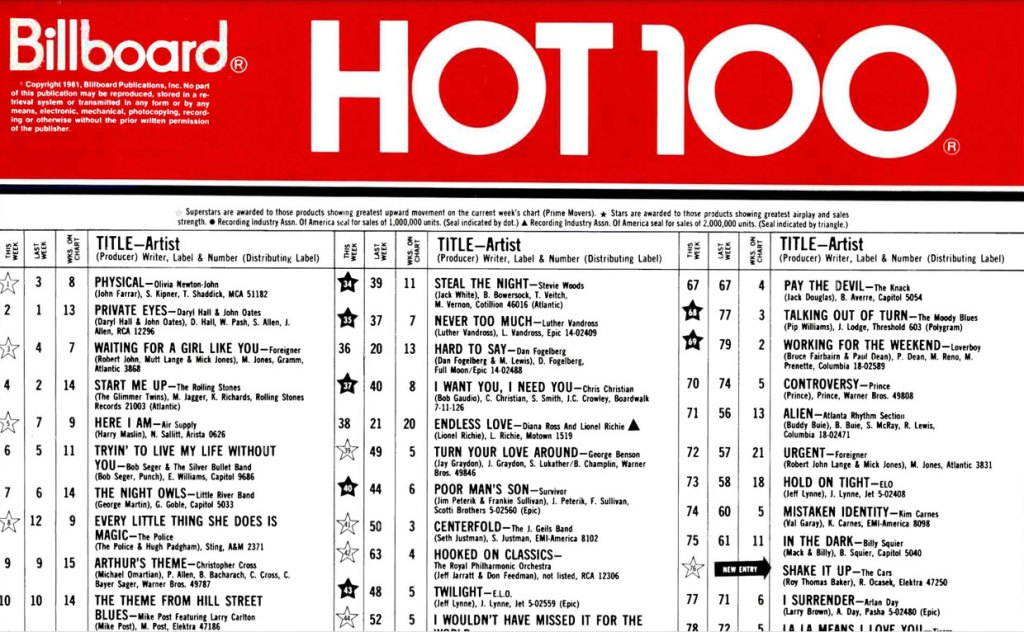 It was a status that didn’t last particularly long, however. Both Newton-John and Harry were about to be supplanted by a new class of do-everything MTV super-duper-stars, led by a couple rising powerhouses in Michael Jackson and Prince, and one brand new ’80s icon in Madonna. The latter in particular took the medicine ball from “Physical” and ran with it, creating a cultural empire out of her brand of self-aware, sexually unapologetic, nuclear-strength pop music. (She even included a “Physical” song of her own on her 1983 debut album.) Newton-John scored two more Hot 100 top 5 hits in 1982, with Physical follow-up “Make a Move on Me” and her new Greatest Hits, Vol. 2 recording “Heart Attack,” and one more in ’83 with “Twist of Fate,” from the soundtrack to rom-com Two of a Kind, which served as the film reunion of her and Grease co-star Travolta. But over a decade into her career, she didn’t quite have the firepower to keep up in the rapidly advancing top 40 landscape, and by the end of the ’80s she had largely become.a legacy act.

It was quite a legacy, though: five No. 1 hits, with the biggest saved for last — one that currently ranks just outside the top 10 on Billboard‘s Greatest of All Time Hot 100 chart. As Newton-John pivoted to more of a career in humanitarian causes and advocacy in the ’90s and beyond, particularly following a breast cancer diagnosis in 1992, her music continued to reach new generations, through Grease revivals and Glee covers and even some Xanadu cult reappraising. And “Physical” continues to impact pop music to this day, via singles by the two biggest female top 40 stars of the early 2020s: Dua Lipa’s “Physical,” which resurrects the chorus chant and cardio vibes of Newton-John’s classic, and Doja Cat’s “Kiss Me More” collab with SZA, which borrows enough of the hook’s melodic phrasing in its own clipped refrain to earn Kipner and Shaddick a writing credit on it. Workout trends and fad diets come and go, but decades from now, you’ll still be hearing “Physical” pumping from your gym’s speakers.