Forever No. 1 is a Billboard series that pays special tribute to the recently deceased artists who achieved the highest honor our charts have to offer — a Billboard Hot 100 No. 1 single — by taking an extended look back at the chart-topping songs that made them part of this exclusive club. Here, we honor the late Olivia Newton-John, who died this week at age 73, with writer Michele Catalano’s account of how much Newton-John’s second Hot 100 No.1, 1975’s “Have You Never Been Mellow?,” meant to her as a 13-year-old with conflicted music tastes.

Forever No. 1: Olivia Newton-John's 'I Honestly Love You'

In 1975 there were two factions of popular rock music in the American landscape. There was hard rock bursting its way into the bedrooms of teenagers: Black Sabbath and The Who and Led Zeppelin, who were all massive in the moment. But that kind of music was not really reflected on the singles charts of the day. Instead, there was a decidedly soft rock bent to the list of then-current radio hits: Linda Ronstadt, The Eagles, The Carpenters were in constant rotation. The “cool” kids were listening to the harder rock, leaving the softer tones for the adults and decidedly less cool teens.

I was 13 in 1975 and was aligning myself with the cool kids. I listened to Sabbath and Zeppelin. Their music made me feel like I was living dangerously; there was a primal urge to scream along with the songs, a ferocious need to spring from the manicured lawns of suburbia into a sort of rebellion, just by blasting “Paranoid” out of my bedroom. Despite that rock and roll posturing, I felt like a fraud because hidden under my bed were albums by The Carpenters and Paul Simon and Elton John. I secretly loved that kind of music in the same all-encompassing way that I loved listening to Black Sabbath. There was something about it that made my heart want to experience the same love and loss they were all singing about.

I sat differently with those records than I did the hard rock albums. While Zeppelin made me want to scream and wail and maybe burst out of my perceived confinement, the softer rock made me sigh, made me cry. I felt wistful and melancholy, though I didn’t have the words to describe it then. I just knew it made me have emotions that I had no real world experience with. I liked feeling sad. I liked imagining being lovelorn.

It was in March of ‘75 that my friend Debby – the only friend who knew of and shared my love for soft rock – showed up with a new copy of Olivia Newton-John’s Have You Never Been Mellow, her fifth studio album. Newton-John had been on the charts in recent years so I knew some of her songs, most notably “I Honestly Love You,” which had become her first Hot 100 No. 1 hit the past October. It was one of those songs I sang under the cover of darkness and headphones, a favorite that I hid away from my friends. I was eager to listen to something new by Olivia. It had been a long, cold winter and Olivia Newton-John’s voice was a summer breeze that I desperately needed. I wanted some new music to move me, to make me feel something.

Debby dropped the needle on the first song and “Have You Never Been Mellow” started up. I was immediately enraptured. There was something about Newton-John’s voice that felt so vulnerable and real. I felt her pleading, reaching out to me. I was yearning for something I was unsure of; I didn’t know of love, I didn’t know of feeling so much for someone that you would write a song about them. I just knew that this song was beautiful, that Newton-John sang it with grace and humility, that I wanted to listen to it forever. When she sang “Now I don’t mean to make you frown/ I just want you to slow down” I imagined her singing this to a friend or lover, taking great care to make sure they enjoyed life for what it was. It made me wish she was my friend.

I begged Debby to leave the album with me when we were done listening. She did, and I spent an entire night listening to that first song, picking up the needle as soon as it ended and dropping it back at the beginning. The softness of her vocals, the restrained way in which she tries to get someone she loves to slow down, enjoy life – it just spoke to me in such a way that I knew Olivia Newton-John was a good person, that this song marked her true self. I wanted to know her, I wanted to be her, with her perfect looks and beautiful voice and the adoration of millions of people. She was pure and America – still reeling from Watergate and still a month away from the end of the Vietnam War — really needed something pure right then, something to make us sigh and forget the ugliness of the world for a few moments. 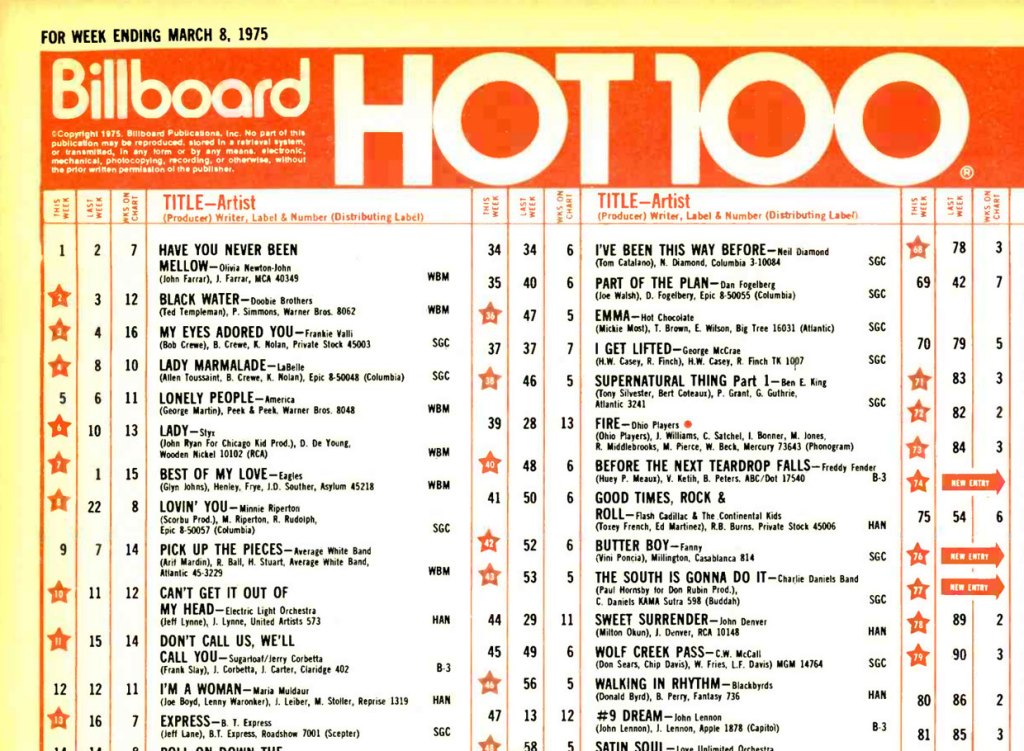 “Have You Never Been Mellow” hit number one on the Hot 100 on the chart dated March 8, 1975, taking over from another pillowy rock ballad in the Eagles’ “Best of My Love” and ruling for one week, before giving way to the Doobie Brothers’ rootsier but similarly laid-back “Black Water.” It was everywhere; blaring out of radios, a standard on the jukebox in the firehouse club my parents took us to every weekend. I didn’t care if anyone saw me singing, or caught me knowing all the words. I had the company of so many other Olivia Newton-John fans.

My secret was out, and I embraced it. I had my mother buy me an iron-on T-shirt with Olivia’s face on it. I got my own copy of the album and I left it out with my Black Sabbath records, much to the dismay of my “cool” friends, who endlessly razzed me about it. I realized there was no reason my love for beautiful soft rock couldn’t intermingle with my love for hard rock. Olivia didn’t exactly bridge that gap, but her popularity made it okay to like both. She may have been Australia’s daughter, but for a while she was America’s sweetheart.

Newton-John may have had bigger hits in the years to come — her songs from Grease and synthier early-’80s smashes would form her most enduring impressions on the collective consciousness of America. But “Have You Never Been Mellow” is the song that immediately comes to mind when I think of her, and of those days spent listening to it, feeling guided by her voice. The sincerity with which she sang in turn made me more sincere about the music I loved but kept hidden. And for that I’ll always be grateful.