Forever No. 1 is a Billboard series that pays special tribute to the recently deceased artists who achieved the highest honor our charts have to offer — a Billboard Hot 100 No. 1 single — by taking an extended look back at the chart-topping songs that made them part of this exclusive club. Here, we honor the late Olivia Newton-John, who died this week at age 73, with a deep dive into the only one of her five No. 1s shared with a co-lead: “You’re the One That I Want,” her Grease duet with co-star John Travolta, which marked a major career pivot for the soft-rock superstar.

“You’re the One That I Want” was a game-changing single for Olivia Newton-John, just as it was a song of transformation for Sandy Olsson, the character she played in Grease.

Understanding the fine points of the plot of Grease is certainly not essential to enjoying this track, but for the few readers who have somehow managed not to see the film, here’s the set-up: Danny Zuko, played by John Travolta, has recently lettered in cross-country in an effort to win back his estranged girlfriend Sandy. Unbeknownst to him, Sandy has transformed into a hot biker chick to win back Danny. “You’re the One That I Want” is the moment when the prim-and-proper Sandy becomes va-va-va-voom sexy, with black spandex pants that seemed painted on and a cigarette dangling from her lips that she later stamps out with her red, open-toed stiletto mules.

The single also marked a bold style change for Newton-John, whose early country and pop hits were much tamer. It paved the way for a second run of hits – more rhythmic, more contemporary – including “A Little More Love,” “Deeper Than the Night,” “Make a Move on Me” and of course “Physical.”  Before Grease, Newton-John was seen as an adult contemporary-leaning pop star, in the same lane with Helen Reddy and the Carpenters. After Grease, her peers were the top female artists of the late ’70s and early ’80s — Linda Ronstadt, Donna Summer, Barbra Streisand and Pat Benatar.

RSO Records saw in Grease the makings of another blockbuster soundtrack like Saturday Night Fever, which it had also released. (Travolta, of course, starred in both films.) RSO seemed to know it had a winner in “You’re the One That I Want.” “The ‘1’ You’ve Been Waiting For,” headlined a full-page ad that ran in the March 25 issue of Billboard.

Billboard made “You’re the One That I Want” the top singles pick in the following week’s issue – ahead of another notable release, Wings’ “With a Little Luck” (which also would make it to No. 1 on the Billboard Hot 100.) That same week (April l), “You’re the One That I Want” was the top new entry on the Hot 100 at No. 54. It rose to No. 1 for the week ending June 10, its 11th week on the chart, dislodging another male/female duet, Johnny Mathis and Deniece Williams’ “Too Much, Too Little, Too Late.”

The exhilarating – you might even say “electrifying” – duet was light years from Newton-John’s first two No. 1 hits, the glossy ballad “I Honestly Love You” and the wistful, easy-tempo ballad “Have You Never Been Mellow.” To borrow a line from my liner notes for the 2005 ONJ collection Gold, the throbbing, gaudy hit is a little like eating junk food at a carnival – like the one in the “You’re the One That I Want” film sequence – not nutritious, but what fun!

Newton-John sings “You’re the One That I Want” with unexpected stamina and power. The song  was the hottest male/female duet from 1978 in more ways than one. It was the biggest, but also the most dynamic and charged. Its only real rival among male/female duets in terms of dynamics was “Whenever I Call You ‘Friend’” by Kenny Loggins featuring Stevie Nicks.

Critics often pointed to the “whispery” quality of Newton-John’s voice on her first hit, a cover of Bob Dylan’s “If Not for You,” and assumed that was because she didn’t have firepower to offer. “You’re the One That I Want” proved that she did. Her taut vocal on the track de-emphasized the pretty quality of her voice and showcased its dynamics. One of the most compelling aspects of “You’re the One That I Want” is the clipped way that Newton-John and Travolta deliver the title phrase.

The Billboard charts reflected the change in Newton-John’s approach. “You’re the One That I Want” stalled at No. 23 on what was then Billboard’s Easy Listening (now Adult Contemporary) chart. Newton-John had been one of the hottest artists on that chart up to that point – she had 11 consecutive top 10 easy listening hits from 1973’s country-infused “Let Me Be There” through 1977’s elegant ballad “Sam.” If easy listening radio stations in 1978 weren’t sure what to make of “You’re the One That I Want,” that might just be the best indication of the success of her transformation.

“You’re the One That I Want” also represented an advance for Travolta, whose mopey ballad “Let Her In” made the top 10 on the Hot 100 in July 1976, but provided little evidence that he would soon star in one of the most popular film musicals of all time. But here his line reading of “I got chills/ They’re multiplyin’” gives the song an erotic charge that goes beyond the line as written. He doesn’t just have chills, he has  … Well, you get the idea. (The “You’re the One That I Want” film sequence is marvelously staged. It was one of the highpoints of the film, which was directed by Randal Kleiser and choreographed by Patricia Birch.)

Of the six singles released from the Grease soundtrack, only one – “Greased Lightnin’” – was in the original production of the Warren Casey-Jim Jacobs musical, which played in Chicago for eight months in 1971. “Summer Nights” was written for the show’s transfer to Broadway in 1972. “Grease,” “You’re the One That I Want,” “Hopelessly Devoted to You” and “Sandy” were written for the film.

“You’re the One That I Want” replaced “All Choked Up,” which was positioned in the same spot in the Broadway show. “All Choked Up” was similar in theme – and even includes Sandy’s unforgettable spoken line “Tell me about it, stud” –  but different in style (and not as good). They were smart to sub it out. 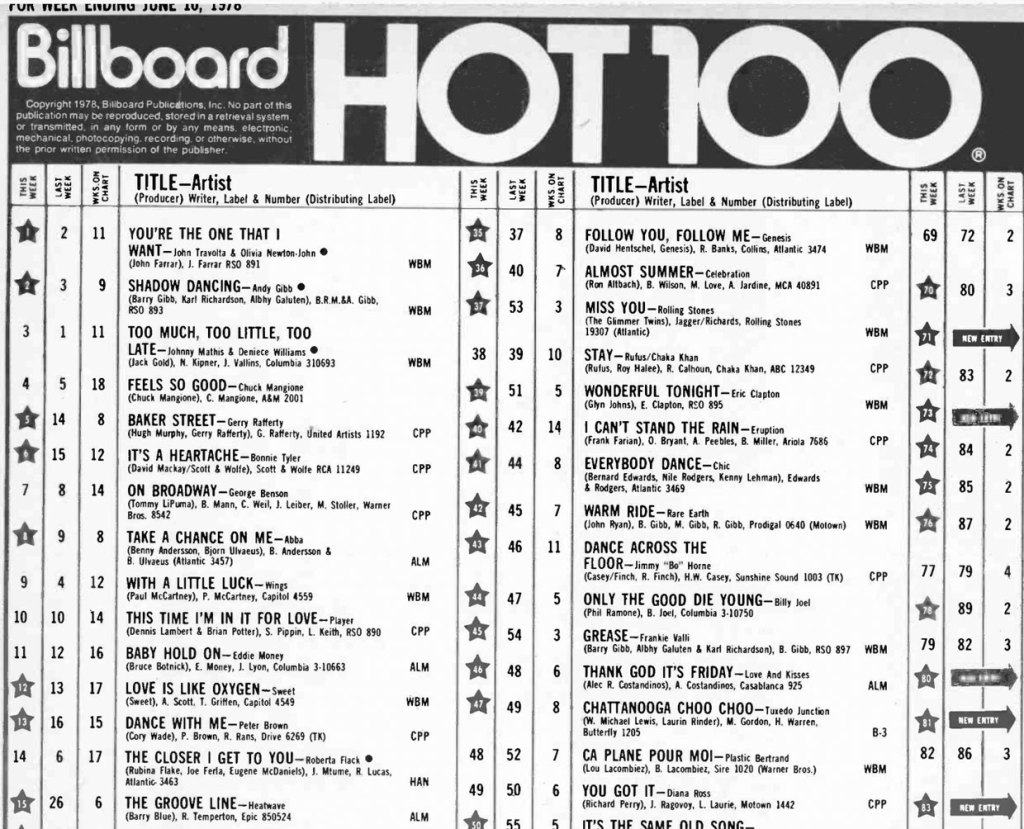 Grease was the top-grossing film in the U.S. and Canada for 1978, easily outdistancing runners-up National Lampoon’s Animal House and Close Encounters of the Third Kind. The Grease soundtrack finished No. 2 on Billboard’s list of the year’s top albums, topped only by the Saturday Night Fever soundtrack.

Though it was a hit with the public, Grease found less success with critics and Academies. The film received just one Oscar nomination – best original song, for the stand-out ballad “Hopelessly Devoted to You,” which elicited one of Newton-John’s finest vocals. (“Last Dance,” sung by Donna Summer in Thank God It’s Friday, won the award.)

Grease also netted two Grammy nods – album of the year (it lost to Fever) and best female pop vocal performance (again for “Hopelessly Devoted”). “You’re The One That I Want” was eligible for best pop vocal performance by a duo, group or chorus, but didn’t rate a nod. (It probably wouldn’t have won anyway: Bee Gees had that one in the bag for Fever). The one place the musical found favor was at the fan-voted American Music Awards: Grease won favorite pop/rock album, beating both Fever and Fleetwood Mac’s Rumours, the 1977 blockbuster which remained popular in 1978.

“You’re the One That I Want” was a big hit in many foreign markets as well. The song topped The Official U.K. Singles Chart for nine consecutive weeks from June 17 to Aug. 12, 1978, the longest run at No. 1 by any single in that calendar year. In Australia, the single spent nine nonconsecutive weeks at the top, which made it the best-charting single of the year. (These were Newton-John’s home countries: She was born in England and raised in Australia.)

Numerous acts have revived the song over the years. In 1982, Alvin and the Chipmunks recorded the song for their album The Chipmunks Go Hollywood.  In 1993, “You’re the One That I Want” was issued as the lead single from Grease – Original London Cast Recording. The new version by Craig McLachlan and Debbie Gibson peaked at No. 13 on the Official U.K. Singles Chart. In 2018, Foo Fighters performed a rather loose and ragged (but fun) version of the song at a few tour stops, in Lexington, Ky. and Tampa, Fla. and at the Welcome to Rockville festival when they brought Travolta on stage.

“I just remember seeing that Sandy as a kid and that just basically defining my existence, so in that moment, I was like, ‘I need to be here [doing the commercial],’” Doja told Billboard, explaining her love of the “bad” Sandy look. “I love that movie so much.”