This week, U.K. alt-pop band Glass Animals’ “Heat Waves” made Billboard Hot 100 history by topping the chart in its 59th week on the listing — besting the previous record-holder for longest journey to the top (Mariah Carey’s “All I Want For Christmas Is You”) by a resounding 24 weeks.

Billboard has written about how the historically unusual path the single took is more typical of what it means to be a viral hit in 2022 — one that doesn’t necessarily have a stratospheric peak or any particularly major jumps, but which builds slowly (and non-linearly) over the course of many mini-surges. Now, you can actually see the song’s non-traditional progress as tracked from January 2021 — when the song first debuted on the Hot 100, though it promptly fell off the listing for two weeks before resuming its chart journey — all the way to its No. 1 triumph this week, through the following graph: 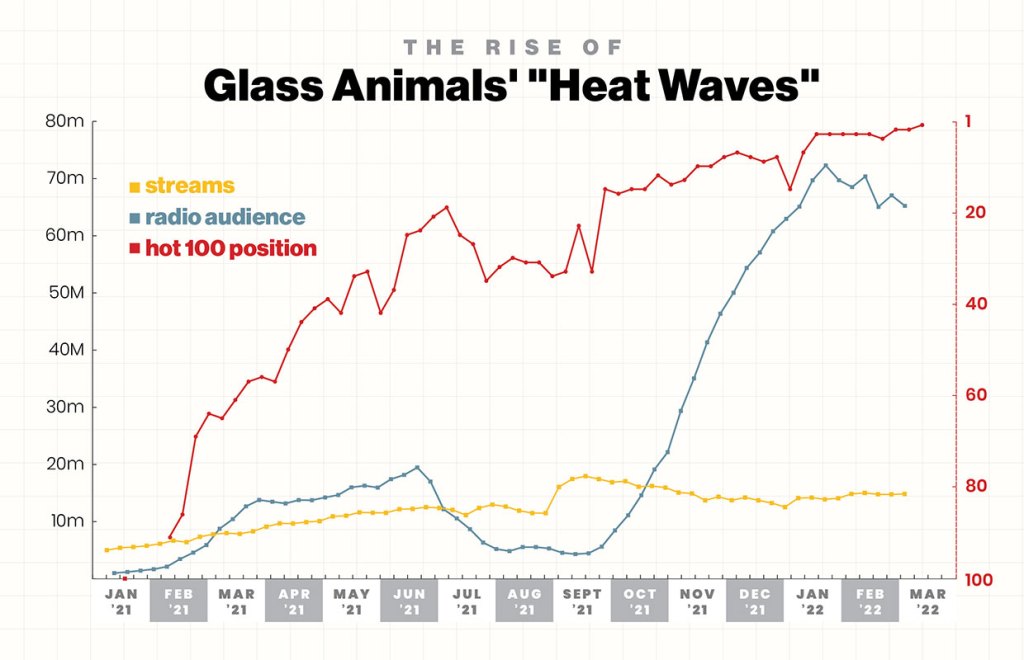 As you can see, there aren’t any truly gigantic spikes in the song’s streaming or radio play that feel like total game-changers in the song’s trajectory — the closest comes in late summer of 2021, when the song’s streaming activity jumps by about 40% between the chart weeks dated Aug. 26 and Sept. 2, as the song took off anew on TikTok (with the “Sometimes all I think about is you” lip dub trend).

The song’s biggest single-week jump on the Hot 100 wouldn’t come until later in September, when radio airplay began to pick up again after an early peak — prompted in part by the song’s continued streaming virality — and high-debuting songs from Kanye West and Drake (during the second chart week following the releases of Donda and Certified Lover Boy, respectively) began to tumble down the chart.

For the most part, though, the song has grown and fallen in waves (appropriately enough) — until the rising tide of radio and the steady level of streaming was finally able to put it over the top to No. 1 on the Hot 100 this week.