When the Beverly Hills fire marshals gave the all clear to Clive Davis’ annual pre-Grammy gala on Feb. 7, the party hadn’t even started — but a cordoned-off room where the ­evening’s performers ­participated in a ritual preshow portrait session was already packed to capacity with music stars.

“It can be nerve-wracking on that stage because you’re there with your peers — people who know music,” said Jennifer Hudson, who performed the song “Trouble” with Iggy Azalea at the seated soiree an hour later. Added Aloe Blacc, “This is the Grammys before the Grammys.”

Among the first-timers at the event were Sam Smith and Meghan Trainor, while veterans Johnny Mathis and Smokey Robinson, joined by Blacc, JC Chasez and Miguel for The Temptations‘ classic “My Girl,” had the entire room on its feet. Speeches also elicited ­standing ovations; among them were Barry Gibb, who gave a poignant ­reading of the Bee Gees‘ “To Love Somebody” as he accepted the band’s Lifetime Achievement Award, and Sony/ATV ­chairman/CEO Martin Bandier, who extolled the value of ­songwriters during his acceptance of The Recording Academy’s Salute to Industry Icons honor.

And for Swift, who was vocal about turning her seat at the Grammys into her own dance party, Davis’ soiree proved the perfect warm-up. Though Pharrell Williams chided the band for switching keys on him in between Daft Punk‘s “Get Lucky” and his own “Happy,” it didn’t stop Swift and Jane Fonda from tearing up the dancefloor. 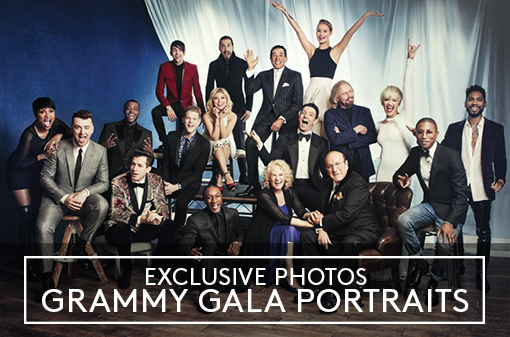