J Balvin, whose new single “Ay Vamos” completed 10 weeks at No. 2 on Billboard’s Hot Latin Songs, will join Farruko, Nicky Jam, Justin Quiles and Plan B at the “New Latin Urban Movement” panel taking place during the Billboard Latin Music conference on Wednesday, April 29. The session will be moderated by Alex Sensation, the well-known New York radio personality and DJ who’s been a trend-setter for Latin dance and urban music in the U.S.

The panel brings together a new generation of names in urban Latin music who have performed phenomenally well on the charts in the past year. 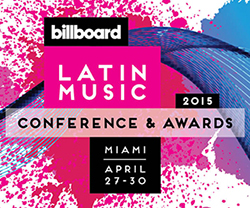 Leading the fray is Balvin, whose single “6 AM” spent 10 weeks at No. 1 on the Latin Rhythm Airplay chart in 2014. His follow-up, “Ay Vamos,” spent 16 weeks at No. 1 on the same chart. Balvin has been touring with Enrique Iglesias and Pitbullsince last year and is a 12-time finalist for the Billboard Latin Music Awards.

Joining him is Puerto Rican Farruko, the featured act on “6 AM,” who as a solo act has also remained a fixture on the charts.Farruko’s current single, “Lejos De Aquí” is currently No. 4 on Billboard’s Latin Rhythm Airplay chart while his album Los Menores (Venevision) debuted at No. 1 on Billboard’s Top Latin Albums chart.

Nicky Jam, the most senior of the panelists, has returned to the charts after a hiatus of many years, armed with new music and a new Colombian production team.  Earlier this month, after multiple forays into the charts, he signed with Sony Music U.S. Latin. On their end, New York-based duo Plan B took back old-school reggaeton to the top of the charts last year with their album Love & Sex, which reached No. 1 on Billboard’s Top Latin Albums chart. Rounding off the panel is newcomer Justin Quiles, who made it onto the Billboard charts for the first time last year, with his single “Maria,” charting on Billboard’s Latin Rhythm Airplay chart, Tropical and Pop Airplay charts.

Moderator Alex Sensation, whose support has been instrumental in breaking all these acts (Balvin says he always plays new tracks for him first), will moderate, culling from his experience both on clubs and on the air. Sensation is currently working on his debut album and is slated to release a first single this spring.