“Chrissy Teigen is already my new best friend!” Ludacris is speaking into his iPhone, narrating a behind-the-scenes clip of Billboard’s cover shoot for his 3.8 million Instagram followers. He has just captured Teigen — his 2015 Billboard Music Awards co-host, the hilariously blunt supermodel and wife of John Legend — as a stylist adjusts the hemline of her black dress. The two have met only a few times before this afternoon in New York, but the rapport between Luda, 37, and Teigen, 29, is easy, playful — even rambunctious. (He didn’t hesitate to pick her up like a bride going over a threshold or give her a piggyback ride while she quaffed Champagne.) “I would love for us to have an Amy and Tina-type banter at the BBMAs,” says Teigen, referring to Golden Globes co-hosts Amy Poehler and Tina Fey. Adds Ludacris: “We are already finishing each other’s sentences.”

Chrissy Teigen Claps Back at Comments Claiming Her Face Is 'Changing'

The Billboard Music Awards date back to 1989, when Paul Shaffer hosted and Michael Jackson took the top album prize. When this year’s telecast airs Sunday, May 17 on ABC, Ludacris and Teigen will showcase the unique overlap of music and pop culture today. Ludacris is a rapper-actor with three Grammy Awards and the billion-dollar Fast and Furious franchise in his credits. In addition to modeling, Teigen hosts the wildly popular Spike TV show Lip Sync Battle and maintains a massive, delightfully waggish social media presence. She has even appeared in the Fast and Furious series — sort of: In 2006’s Tokyo Drift (which doesn’t include Ludacris’ character Tej Parker), Teigen’s body is visible when she steps out of a car. “It was my big moment, and the only thing that ended up [onscreen] were my legs and boobs,” says Teigen, laughing. “No face. I made $50.” 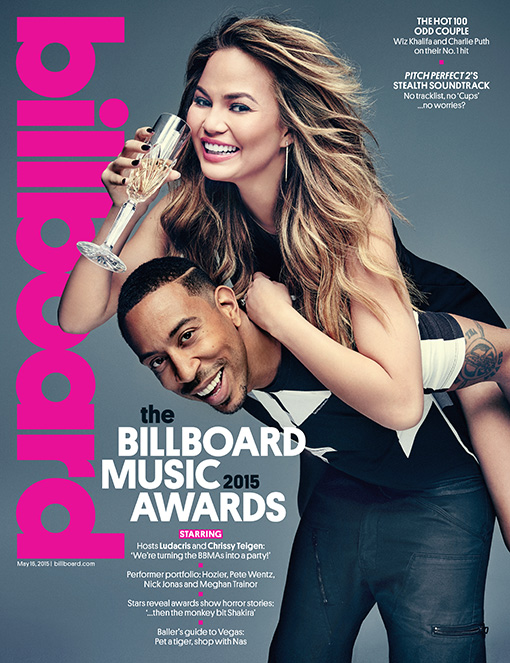 The special appeal of the BBMAs is obvious to Teigen. “It’s one of the most truthful awards shows because it’s about numbers,” she says. And indeed, the event honors the year’s most successful artists in 41 categories using data including album and digital songs sales, radio airplay, streaming, touring and social media interactions. And, of course, there are the performances, which this year will include Van Halen, Ed Sheeran, Kelly Clarkson, Mariah Carey, Simple Minds, Britney Spears with Iggy Azalea, Little Big Town with Faith Hill, and Fall Out Boy with Wiz Khalifa, as well as the artists featured on the following pages: Nick Jonas, Hozier and Meghan Trainor (a nine-time finalist who will duet with Legend).

Here, Ludacris and Teigen talk about their awards show experiences including celebrity encounters, pregame rituals and red carpet gaffes. As Teigen promises, “We are turning the Billboard Music Awards into a party!”

You’ve both been to a lot of awards shows. What has been your most memorable celebrity encounter?

Teigen: John [Legend] and I run into so many different people, but my favorite is when we get to run into Beyoncé. She’s the only person on the planet who I just completely shut down around. John does it as kind of a joke now. He’ll be like, “Can you come say hi?” I think he likes to see me completely weak.

Ludacris: One that blew me away was Janet Jackson. I grew up on her music, so it was pretty dope running into her.

Ludacris Reveals the Best Advice Ice Cube Ever Gave Him

Who’s the most random person you’ve sat beside at an awards ceremony?

Teigen: They’re all random if you consider how random I am. Their answer is probably me.

Ludacris: Probably Wayne Newton. I tried to get his contact information because he has the key to the whole damn Las Vegas city. So if I ever go to jail in Vegas, I can call Wayne Newton.

Teigen: Oh, I sat by Grumpy Cat once. You know that cat everyone is obsessed with? That’s pretty random. She’s not allowed to be touched. Are you kidding? You can’t put a cat next to me and expect me not to touch it.

Does ‘Furious 7’ Have ‘the Paul Walker Effect’? Ludacris Thinks So

What’s the dumbest question you’ve been asked on the red carpet?

Teigen: I get everything, but I think people know that nothing is weird to me. If anything, I’m worried about challenging questions. Like at the White House Correspondents’ Dinner, you have some cocktails before and you’re not sure you’re ready to be asked about, you know, tensions in the Middle East.

Ludacris: When I had braids a long time ago, someone called me Snoop Dogg.

What is your favorite award you’ve ever won?

Ludacris: The best [rap] album Grammy for [2006’s] Release Therapy. When I recorded that album, I set out to win because I was nominated in a category like six [consecutive] years before that — every damn year — and I lost every single one of them. So I was like, “I’m finally going to accomplish this one.” Once I got it, it was just like a big weight had been lifted off my shoulders.

Teigen: I was the first [annual] Rookie of the Year for Sports Illustrated‘s swimsuit issue. The [joke] trophy is a painted Barbie doll that MJ Day and Darcie Baum, the editors of Swimsuit, spraypainted in their hallway. There are loose hairs attached to it — it’s weird — but it’s the first thing I was ever given and I truly cherish it, I love it.

Chrissy Teigen on Bill Belichick Getting Caught Checking Her Out: ‘Poor Guy’

Have you ever experienced a major wardrobe malfunction?

Teigen: Oh, my God, always. Every White House Correspondents’ Dinner for the past three years I have broken my dress and can’t even zip it, so we have to leave — that’s why I’ve missed every carpet appearance. One time we had to go into Virginia to find me a new dress. Nip slips, everything — I’ve seen it all. Honestly, I don’t really care.

Teigen: Anything I get to wear to the Met Ball is huge. I’m not a fashion girl, so it’s cool to be dolled up and have those diamonds where they send armed guards with you. (Laughs.) I get that a lot.

How long does it take you to get ready for an awards show?

Teigen: My team books [at least] two hours now for hair and makeup. They know there’s some lag time — obviously, we talk a lot. Everyone who does my hair and makeup is a good friend. It tends to take longer than if we were really buckling down. It’s a good solid two hours and 30 minutes — and that doesn’t include all the fittings beforehand.

Ludacris: Takes me five minutes to put on my clothes.

Album Review: Ludacris’ ‘Ludaversal’ Is His Moodiest Yet

What do you do beforehand?

Ludacris: Pray. I always pray for all of the things I’m able to do because I am living out a dream and making a living off of it. So that is pretty much the ritual. I have a rider, and as long as there’s a little liquor on that rider — liquor and prayer. I know that doesn’t really go together, but hey!

Have you ever been extremely drunk at an awards show?

Teigen: Yes. All of them. Honestly.

Teigen: The Grammys are tough, though, because they’re, for the most part, a dry awards show. I’m like, “Should I bring a plastic flask?” I think about this every year.

What’s your advice on how to survive the Billboard Music Awards for the first time — for, say, Meghan Trainor?

Teigen: I love Meghan to death — I don’t want anyone to get nervous out there. Especially for the Billboard Music Awards. So I’d say, have a good time and take a few deep breaths and meet Luda and me in the back for a tequila.