Twenty One Pilots are stripping back their sound for the next installment of MTV Unplugged.

MTV Unplugged in Partnership With Rockstar Energy Drink Present: Twenty One Pilots will premiere globally on June 9 at 9 p.m. ET exclusively on MTV. In this latest edition of the iconic MTV Unplugged series, Twenty One Pilots take the stage in Los Angeles to perform stripped-back and reimagined versions of some of the biggest songs from their catalog.

The Twenty One Pilots show will be the first of three in partnership with Rockstar Energy. The three-part music series is tied to the launch of Rockstar Unplugged, the brand’s newest beverage. The other artists for the last two installments will be announced at a later date. The next two concerts are scheduled to take place in New York and Atlanta later this year.

After shifting to an at-home concert model in spring 2020 with Miley Cyrus, the celebrated MTV Unplugged series returned to its original format in 2021 with performances from K-pop superstars BTS and the legendary pairing of Tony Bennett and Lady Gaga.

New 'YO! MTV Raps' Has a Release Date: Watch the Trailer Now

The news comes as the duo gears up for a global takeover with The Icy Tour making stops across North America and Europe this summer and fall. Additionally, they will host the upcoming Twenty One Pilots Cinema Experience film event, which will bring fans an extended cut of the duo’s 2021 album release livestream performance with audio and video remastered for the big screen, and more than 20 minutes of never-before-seen footage. 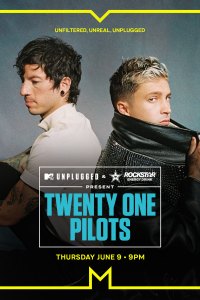