Dave Grohl is on a winning streak. The Foo Fighters singer/guitarist’s memoir The Storyteller: Tales of Life and Music moved up a couple of notches to land at No. 9 on the New York Times best-sellers list, which is up two spots from the previous week.

Over on the Amazon book charts, The Storyteller is at No. 1 on the Rock Band Biographies list ahead of Crying in H Mart by Japanese Breakfast’s Michelle Zuner, who takes up two spots on the Amazon list for hardcover and paperback copies of the book. Paul McCartney’s The Lyrics: 1956 to the Present is at No. 4 on Amazon’s list followed by the Kindle edition of Storyteller and Elton John’s autobiography, while The Beatles: Get Back rounds out the top 10.

Grohl’s Storyteller memoir has had a great run since its release last October when it debuted at No. 1 on the NYT best-sellers list. “Never in my wildest dreams did I ever imagine that I would someday be a number one bestselling author, but it’s those same wildest dreams that I’ve followed since the day I picked up a guitar. Honored,” Grohl wrote on Instagram at the time. “Huge thanks to everyone at @deystreet for making my first book such an amazing experience.”

In November, Grohl unveiled limited-edition signed copies of the memoir at select bookstores around the country. If you haven’t gotten around to buying The Storyteller click the link below to purchase a copy. For additional book recommendation, see our list of 15 books that every music fan should read. 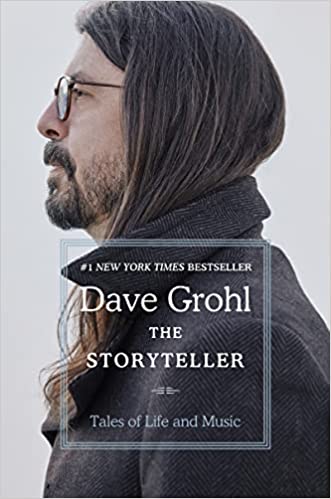