PETA announced Wednesday (Dec. 1) that Billie Eilish is their 2021 Person of the Year for “championing animal rights, never staying silent about injustice, and using her influence to push the fashion industry to recognize that cruelty is never in style.”

Eilish is the youngest person to ever receive PETA’s Person of the Year honor.

“Billie Eilish is making sure that the party’s over for meaty, milky meals as well as for leather, fur, and silk,” PETA President Ingrid Newkirk said in an official statement. “PETA is happier than ever to celebrate her for seizing every opportunity to point out that vegan fashion and foods are kinder to the animals and the planet we share with them.”

PETA cited Eilish’s recent fashion and beauty endeavors as reasons for her receiving the honor. The “Happier Than Ever” singer served as the youngest chair ever at the 2021 Met Gala and partnered with Oscar de la Renta on a custom vegan silk-free gown on the condition of banning fur products in their future clothing lines, which the brand agreed to. Vegan meals were also served at the event. 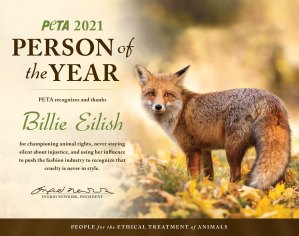 For the singer’s recent Air Jordan shoe collection with Nike, she revealed that the sustainable edition of shoes were made of “100% vegan with over 20% recycled material” via Instagram. Eilish’s self-titled new perfume additionally contains no animal ingredients and isn’t tested on animals.

The singer also opened up about her decision to be vegan in an interview with British Vogue in May. “I learned about the dairy industry and the meat industry,” Eilish said. “I just can’t go on in my life knowing what’s going on in the animal world and not doing anything about it.”

Earlier this year, Eilish was one of 20 stars to receive PETA’s 2021 Most Beautiful Vegan honor alongside fellow musicians Lenny Kravitz, Anderson .Paak, Chloe and Halle Bailey and Lizzo.