For most of the past half-century, the Consumer Electronics Show (CES) has been the most influential technology event in the world. It’s where the CD player, the DVD, Nintendo’s NES, Microsoft’s Xbox and Tetris made their big debuts, and more recently it’s where startups like Oculus (now a subsidiary of Meta) showed off their hardware before becoming key cogs in the future of technology.

Now, Billboard is giving out awards to the best and most innovative products announced at CES in the audio space, including headphones, speakers, TVs and software that improves the audio experience for music lovers. Some of these products are prototypes, and some are available in stores today or will be in the coming months, but all of them represent the next steps in the evolution of sound and how the public will be consuming audio in the near future. Here are the winners of Billboard’s inaugural Best of CES Awards.

Mayht, a small four-year-old Dutch startup claims Billboard’s top CES award with its stunning HeartMotion technology that reinvents a speakers’ driver component that would allow manufacturers to produce more powerful speakers in smaller forms. “With our technology, you can make speakers up to 10 times smaller, or you can keep them the same size and make them 10 times more powerful,” says Mayht co-founder and CEO Mattias Scheek. Scheek co-founded Mayht with his brother Timothy Scheek (CTO) and former Sony exec Max van den Berg (CCO). “Timothy and I, we have been very passionate about audio since we were seven and eight years old, and our dream always has been to make the best speaker in the world, and in the end, get something that’s really for the masses.”

Billboard was the first publication to experience the innovative technology in person, listening to a speaker designed using Heartmotion and comparable in size to an Amazon Echo Dot produce enough bass and clarity to easily rival a Sonos One, and hearing another Heartmotion speaker the size of a hardcover book perform equally to the $550 Sonos Five speaker. Mayht has also partnered with investor and solar technology firm Exeger to create a prototype of a light-powered speaker using Mayht’s Heartmotion technology, which the companies say features unlimited battery life.

Mayht isn’t looking to compete with the likes of Sonos, Apple and JBL with its Heartmotion technology, instead preferring to license its technology to firms who are already a staple in the audio market. Going off what we heard in Las Vegas, that shouldn’t be a challenging task.

With a $1,000 price tag, the Mark Levinson No 5909 is nowhere close to affordable for most of the public, but if excellent audio quality and compatibility with high-res audio is your goal, the No 5909 checks all the boxes. The high-end audio brand known for automotive sound systems and home audio setups has released its first pair of headphones, designed specifically for high-fidelity audio and comfort. Featuring a leather headband and ear cushions, 40mm Beryllium coated drivers, up to 34 hours of playback time and a slew of adapters for every situation (including an airplane adaptor), the No 5909 headphones meet nearly every need for an audiophile on the go.

The company says the headphones are compatible with “24-bit/96kHz processing and acoustic response up to 40kHz,” and will feature three different active noise cancellation modes for quiet flights and train rides. Given the price tag that should be expected, but fitting everything on an audiophile’s wish list into one pair of headphones is a feat that should not be overlooked no matter the cost. The headphones are available today for $999.

Jabra has consistently produced some of the best low-cost true wireless earbuds in the industry, and the Jabra Elite 4 Active takes the next step, improving on the widely praised Jabra Elite 3 headphones which were released back in August. The biggest complaint about the Elite 3 was the lack of active noise cancellation, which Jabra promptly added to the Elite 4 Active, along with improving its water and dust resistance all while maintaining the same battery life (7 hours of playback, 28 hours with the charging case), according to the company.

The Jabra Elite 4 Active headphones are available today for $120.

Samsung’s latest software feature for its ever-increasing slate of TVs is Watch Together, a new app that will allow Samsung TV owners to video chat with their friends and families while watching shows, movies, and concerts together. The feature, which is similar to one Apple rolled out on iOS devices earlier this year, continues the trend of shared viewing experiences that will continue as we get closer to the metaverse, the ultimate shared viewing experience. 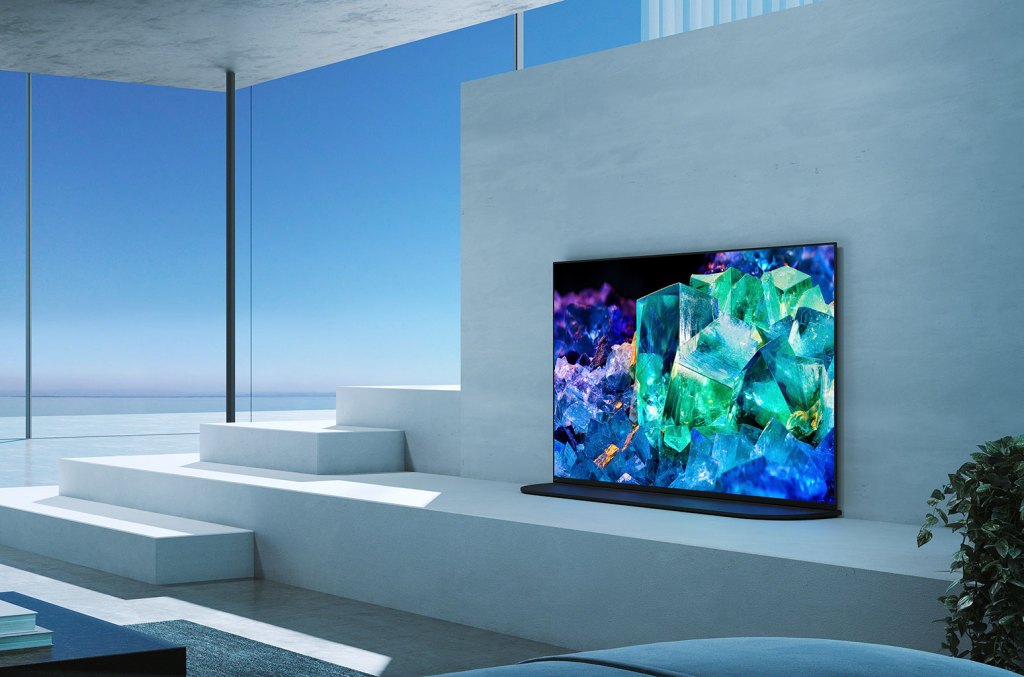 Sony TVs have been known for their superb audio for years, and the latest Bravia set is no different. The Sony Bravia XR A95K did enough to garner attention by being the world’s first QD-OLED (an improved version of OLED that should produce better brightness and more consistent colors) TV, but thanks to several industry-leading audio features, the XR A95K is our pick for best TV for audio at CES. The 65-inch TV includes Acoustic Surface Audio+, a feature Sony says uses actuators to match the position of the sound with the images on screen, and 360 Spatial Sound Personalizer, which allows owners of select Sony headphones to optimize their spatial audio sound experience.

Sony says the XR A95K will be available later this year.

While Sony may own the crown for best TV audio this year, Samsung takes the title of best home theater system, thanks to its new soundbar that includes wireless Dolby Atmos support, allowing the new HW-S800B Ultra Slim Soundbar and Samsung’s 2022 QLED TV lineup to connect without having to run wires. The HW-S800B is also one of the thinnest soundbars you’ll come across, with a depth of 1.6 inches, allowing it to be less intrusive in your viewing experience.

Samsung has yet to give a release date or price for the HW-S800B.

Dell’s Alienware subsidiary has been a staple in PC gaming for years, and its latest gaming headset looks to help the brand maintain that status. Already a CES Innovation Award Honoree, the Alienware Tri-Mode Wireless Gaming Headset takes Billboard’s award for best computer headphones thanks to that “tri-mode” feature that allows the headset to work over Bluetooth 5.2, via a usb-c dongle, or through a traditional 3.5mm headphone cord, providing complete compatibility with any device you may come across.

Add in 40mm drivers, active noise cancellation, 55 hours of battery life on a single charge and Dolby Atmos Virtual Surround Sound support, and the $199 headphones made it an easy choice. The Alienware Tri-Mode Wireless Gaming Headset (AW920H) will be available this winter, according to Alienware.

JBL’s BoomBox 3 improves on the past two versions of the BoomBox — giant, party-approved wireless speakers that are rugged enough to survive a pool party and last through the night. On top of the 24-hour battery life, waterproofing, and the ability to charge your phone that came with the BoomBox 2, the latest version improves on the bass and overall sound profile, with JBL promising a better audio experience thanks to a new three-way speaker system. The company says the BoomBox 3 can also connect to two devices at once and will be available in black and camouflage this summer for $499.95.

The other major announcement from JBL at CES is the Pulse 5, the midsize portable speaker that can double as a lantern thanks to well-placed LEDs. The company says the Pulse 5 will deliver 360-degree sound for 12 hours on a single charge, is waterproof and dustproof, and sports lights that can be customized through the JBL Portable app. Along with the BoomBox 3, the Pulse 5 features JBL PartyBoost, which allows JBL speakers compatible with PartyBoost to pair for stereo sound or connect multiple devices to power a party.