As a makeup artist who’s worked with Dua Lipa, Icona Pop and Tove Lo, Colby Smith knows there’s no bond like the one between pop divas and the LGBTQ community

Here, makeup artist Colby Smith -- who’s worked with pop stars such as Dua Lipa, Billie Eilish, Icona Pop, Tove Lo and Charli XCX -- reflects, in his own words, on his path through the industry and the power of good glam. 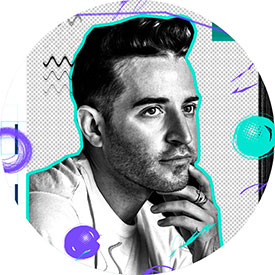 Makeup doesn’t feel like a job. It just feels like getting ready with your best friend. I’ve done it my whole life, so I don’t really know anything else. I was that person in high school that got the girls ready. When I was 18, I went to MAC Cosmetics in L.A. and asked for a job, and they hired me to do counter makeup. Then I moved to New York and was working at MAC when I got a call from a friend to do a photoshoot with these girls no one had heard of. It ended up being Icona Pop, and later that month, “I Love It” exploded. Their management called me: “They look like pop stars! Can you keep doing it?”

Slowly and surely it became more of a job. I met Tove Lo through Icona Pop at a birthday party. [Icona Pop’s label] Atlantic called me to do this up-and-coming girl who was about to release a song with Iggy Azalea -- it was Charli XCX. I met Dua Lipa randomly through Charli at a party and was like, “You’re so beautiful, if you need anything, let me know!” I got a call from Tove Lo’s publicist to do this new girl who had a song called “Ocean Eyes” -- that was Billie Eilish. It was these smaller acts no one had really heard of, but if I loved the music or the look and felt the authenticity of it, I was on board.

I’ve sometimes been called in to edit because an artist is a little too influenced by what they see on Instagram -- maybe they do their brows too dark, and it’s distracting. But when it comes to designing a look for an artist, it’s ultimately about who they are. I love when Tove Lo has full-on high glam, but that’s just not her vibe, it’s not what her music is, so we do something stripped-back. When it’s a new artist, I also like to give them something they can pull off on their own. For Charli one year [during the Sucker album era], our whole thing was a red lip. We found some favorite shades and had brands sponsor her, so if I wasn’t around, she could keep doing that same classic red she was always wearing.

Makeup is a business, and a lot of hiring comes down to budget. An artist might not be able to fly me to London or Los Angeles because there are incredibly talented people in those major cities. Someone with less experience might be more affordable, but it’s also a gamble. You don’t know what you’re going to get. Some people also haven’t flown internationally. I once went to China with Charli seven times in one year. I know how to get in and out of China easily, which can be overwhelming for someone who’s newer.

Investing in good glam is one less thing for a pop star to think about. It helps them feel more confident. They don’t have to worry about how they look -- they just worry about their job. Speed is also important. I’m proud to say that me and my regular hair girl, Korey Fitzpatrick, can do things in 45 minutes to an hour. But there’s a lot of hurry-up-and-wait. You’ll get 30 minutes to do your job, someone will complain it takes too long, and then all of a sudden, it’s an hour later and they’re ready, and you’re like, “Cool, I could have been doing my job the whole time!” You can ask for two hours, but no one wants that. You don’t want to wake an artist up at 4 a.m. if they don’t have to leave until 6 a.m. because they’re going to be tired and cranky.

The relationship between a pop star and her makeup artist is special, especially for queer boys who grew up with that pop fantasy -- we love a diva, we love a stage. It’s super intimate work. You’re not only face-to-face, it’s usually just you and the artist, so you can talk about real things because there’s no management around. You’re also often the last person they see before they go on stage, and every artist gets a bit nervous, so it’s important to be that sense of grounding for them. Artists rarely get time to go sit and hang with their bestie -- we become that person in vulnerable situations.

People will ask, “Isn’t it weird seeing someone naked in a robe? Is it weird being in their personal hotel room with their clothes everywhere?” It doesn’t even register in my brain anymore because I’m just there to do my job. Charli and I have lived on a tour bus together. I’ve seen her at her worst; she’s seen me at my worst. But when you have that bond with an artist, it’s the most fun thing you could ever experience in your life. Dress-up, glam, all rolled into pop music? It’s a perfect recipe.