Elton John Op-Ed on Tirelessly Fighting AIDS Through His Foundation: 'We Have So Much Work Left to Do' (Exclusive)

The music industry has the unique abilities to unite people and to inspire profound social change. That’s why I’m so honored to participate in Billboard’s first philanthropy issue. Through the years, I’ve done my best to use the incredible platform that I’ve been blessed with to make a difference, particularly in the fight against AIDS. 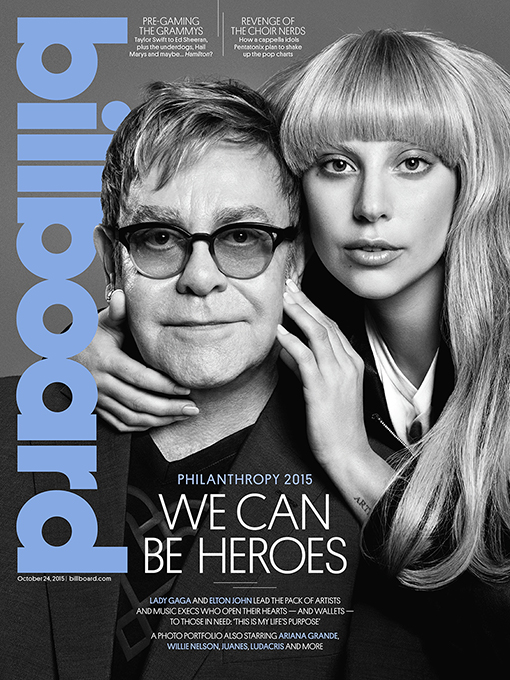 When it first appeared in the 1980s, AIDS was seen as a “gay disease.” Tens of thousands of gay men were dying and it seemed like no one cared. People who contracted HIV/AIDS were shunned by their own families, turned away from medical providers and treated like they weren’t even human. Dozens and dozens of my close friends and many colleagues in the music industry became HIV positive. They suffered and died, and it was the most horrible feeling, losing loved ones and knowing there was nothing I could do to help.

But I knew I had to help. I needed to do something. I started small by volunteering and lending my voice to the growing chorus of activists speaking out about the crisis. But I quickly realized that wasn’t enough. And not only that, I realized I could do so much more, thanks to the incredible reach of the music industry and the power of music in our culture. So in 1992, I created the Elton John AIDS Foundation in the United States and, a year later, in the United Kingdom. We weren’t looking for a cure -- we simply wanted to help people, provide care and support and comfort, and fight the injustices faced by those living with HIV/AIDS. Most of all, we wanted them to know they mattered and that someone cared.

My foundation became part of a close-knit movement of people and organizations that were motivated by the same drive to help people in need and to fight the horrible stigma and discrimination associated with HIV/AIDS. I joined countless philanthropists and activists whose names we all know for their limitless generosity -- Larry Kramer and Elizabeth Taylor. I also worked alongside those whose names you might not know, people working tirelessly on the front lines of the crisis in communities most vulnerable to the epidemic and in research laboratories that were desperately searching for treatments and maybe even a cure.

Every one of those people refused to let the world ignore a public health crisis caused by discrimination and homophobia, a crisis driven by stigma. They advocated, relentlessly and compassionately, in the fight against HIV. Together, they changed the course of history and saved countless millions of lives. I’m proud and honored to have worked alongside them.

It might be hard to believe in 2015, but not long ago, AIDS was the biggest public health crisis in the world. By 1992, AIDS was the No. 1 cause of death for men ages 25-44 in the United States. Tens of millions of people died around the world. But today, thanks entirely to the hard work of activists, HIV/AIDS is no longer a death sentence. Instead, it is a manageable chronic illness. We know how to prevent it. We know how to treat it. And someday, we may learn how to cure it. In the meantime, in very many countries, new infections have stabilized. Millions of people have access to life-saving treatments. And health experts believe we can create an AIDS-free generation and, one day, an AIDS-free world.

But we have so much work left to do. There are too many people who lack access to critical treatment and prevention programs. There is still a dangerous lack of compassion for those living with HIV and those at risk of contracting it. As a result, there is a lack of social services and sexual health education, especially in minority, rural and gay communities. But despite all these challenges, I truly believe that we have the power to achieve an AIDS-free generation, because I’ve seen with my own eyes the incredible progress we’ve made during the past three decades. I never thought we’d get this far, this close to ending the epidemic. And my greatest hope is to live to see the day when we win the fight once and for all.

That’s why my foundation continues to work with communities and organizations made up of individuals who share our passion for fighting the stigma that drives this disease. We’re committed to securing the basic human rights of those living with or at risk of contracting HIV.

I look back over the past three decades, and I vividly recall the pain, the suffering and the loss. It is unimaginable. It is unforgettable. But I also feel more hope and confidence and excitement than ever before, because we all have the power to make a difference -- each and every one of us. We’ve seen it time and again. All that’s required is for enough people to stand up, join hands and fight for what they believe in.

John, 68, founded his AIDS foundation in 1992. Since then, EJAF has raised $349 million for HIV/AIDS treatment and prevention and has become one of the largest HIV/AIDS grant-makers in the world. In addition to his continued work through EJAF, John supports the Breast Cancer Research Foundation and scholarship funding for students at the Royal Academy of Music, Wright State University and the Juilliard School. John regularly volunteers as a musical performer at fundraising events benefiting a variety of organizations. He also has established the Elton John Charitable Fund, which has directly supported nearly 100 organizations, including the American Cancer Society and Big Brothers Big Sisters.

To learn more about the Elton John AIDS Foundation or how to help, go to EJAF.org.

This article originally appeared in the Oct. 24 issue of Billboard.