Billboard Cover: Britney Spears on Why Her Vegas Residency 'Clicked,' Being Inspired by Celine Dion and a New Album Not Being a 'Full Priority'

Britney Spears was barely 21 when the idea of a Las Vegas residency first crossed her mind. It was 2003, shortly after wrapping Dream Within a Dream, her first full-blown U.S. arena run, when she and a friend stayed at Celine Dion's palatial estate off the Strip to see how the French-Canadian star lived away from the touring circuit.

"I remember how beautiful it was -- really cool, low-key -- and her dressing room was great," Spears, now a 33-year-old mother of two, tells Billboard from her family's residential suite in Vegas, not far from her own dressing room at Planet Hollywood. "I was actually jealous, like, 'Oh, my gosh, she gets to be in one place all the time.' Everything clicked: To have your children and your family and that way of life, it just makes sense to have everything in one place." 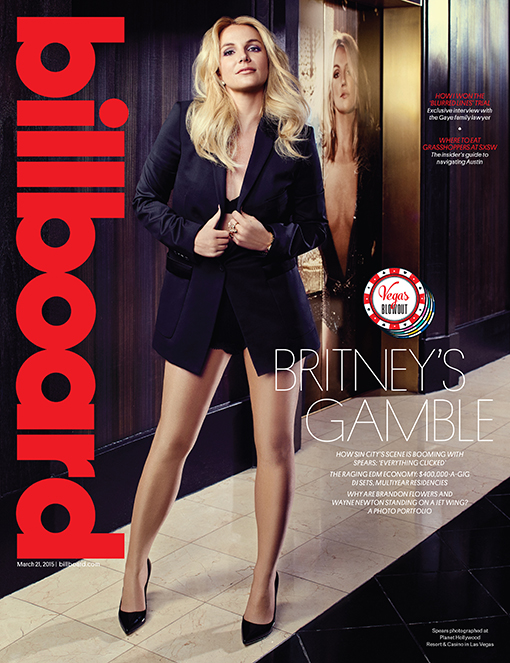 Dion's Caesars Palace residency was a pioneering one. It was the first time an in-her-prime superstar (Dion, like Spears, was 33 when she first embarked) had set up shop in the desert at the peak of her touring powers, debunking the notion that Vegas was a pop-star retirement community. Her 4,100-capacity shows at The Colosseum pulled in $493.7 million in Billboard Boxscore receipts in the first 10 years, and helped lure Elton John, Cher, Bette Midler and Shania Twain to the same venue for a rotation of residencies totaling more than $1 billion in revenue, according to AEG Live.

Las Vegas was transformed by the time Spears launched Piece of Me on New Year's Eve 2013 at Planet Hollywood Las Vegas. (Caesars Entertainment Corp. owns Planet Hollywood.) In 2003, Vegas' economy was just beginning to wean itself off gaming revenue, which accounted for 43 percent of total revenue on the Las Vegas Strip in that fiscal year ($4.5 billion from July 2002 to June 2003); hotels and entertainment made up the remaining 57 percent ($5.9 billion), according to the Nevada Gaming Control Board. Today, entertainment has hit an all-time high ($2.3 billion in fiscal year 2014), with non-gaming revenue accounting for 63 percent of the Strip's earnings.

Britney Spears Is Getting Her Own Holiday

The electronic-dance boom of the late 2000s hastened the shift. A-list DJs attracted a younger, livelier demo than the middle-aged couples who might see a Dion or Cher show, hit the tables for an hour and call it a night. Spears, who has amassed 17 top 20 hits on the Billboard Hot 100 (including four No. 1s), was already on her fourth album when many of Vegas' fun-seekers were in middle school.

"My thought was, if you bring Britney Spears to this town and create what is in essence a pre-game show for that audience -- where they go to the pool, take a nap, pre-game with Britney, then hit the nightclub -- that becomes the majority of the people who come to our show," says Larry Rudolph, Spears' longtime manager, who relocated to Vegas to work as a producer on Piece of Me. That target audience would be someone in the demo of Miley Cyrus, 22, who attended opening night with Rudolph and returned in late 2014. "Afterward she said, 'It's not over, is it? I loved every minute. I know every word to every song,' " Rudolph recalls.

Spears reportedly earns $15 million per year (an average of $310,000 per show) as part of the initial two-year deal, a figure neither Caesars nor Rudolph would confirm. The total run of shows through Feb. 21 has grossed more than $42 million in ticket sales, according to Caesars Entertainment, with four nights of near-sellouts around New Year's pulling in almost twice the amount that Spears grossed from one sold-out arena show on her Femme Fatale Tour in 2011 ($2.8 million vs. $1.5 million at the Staples Center in Los Angeles). Discussions are already underway to renew through 2017 with a substantial raise for Spears. (This despite financial setbacks at Caesars Entertainment Operating Company, which voluntarily filed for Chapter 11 bankruptcy protection on Jan. 15.)

Rascal Flatts manager Clarence Spalding says Spears' residency helped inspire his act's mini-residency at Hard Rock Hotel & Casino's Joint venue this spring. "When Larry first told me about Britney playing her room, I couldn't even sleep that night. The next day I called him and said, 'Is this something for any of my acts to do?' She really stepped up everyone's game."

"The show is something everyone has embraced and considers one of the great milestones in Las Vegas," says Jason Gastwirth, senior vp marketing and entertainment for Caesars. "She's going to be associated with creating this next-generation type of show."

Indeed, Mariah Carey has announced plans for her own residency, Mariah Carey #1's, to start May 6 at The Colosseum, and Jennifer Lopez is rumored to be next. "I've probably gotten calls from 10 major managers asking me advice on their artists," says Rudolph. "People you wouldn't believe, who right now are at the top of the charts, are poking around Las Vegas. But unless you have a deep catalog, where that 65-year-old couple can enjoy it as well as the millennial nightclub-goer, you can't make it work. You're playing to those people and super-fans at the same time. There are very few artists who have that ability to please both."

Meanwhile, Vegas has enabled another kind of comeback for Spears in her personal life. Having weathered public struggles and a string of breakups since her divorce from ex-husband Kevin Federline in 2006, Spears has regained primary custody of sons Jayden James, 8, and Sean Preston, 9, and recently found new romance with boyfriend Charlie Ebersol, 32, son of Olympics producer Dick Ebersol. "Our passion for life is on the same page," says Spears of Ebersol.

It has been 16 years since "...Baby One More Time" hit No. 1 on the Hot 100. (Spears' advice for her 17-year-old self? "Stay strong.") The Vegas routine seems to suit her well. On show nights, she'll spend an hour getting her hair and makeup done while rocking out to Taylor Swift's 1989 ("It's so much fun -- 'Out of the Woods' is a good one") before heading downstairs for a prayer with her team. Afterward, she'll do a meet-and-greet for 30 to 40 fans and any celebrities who might be in town; Lady Gaga dropped in last March, and Arnold Schwarzenegger visited during New Year's. "That was kind of weird," says Spears with a giggle.

This Week in Billboard Chart History: Britney Spears 'Hit' Number 'One' for the First 'Time'

During the weeks she's performing, Spears splits her time between Los Angeles and Vegas. Jayden and Sean come every other weekend, and Ebersol flies in regularly. Beyond Vegas, Spears is still working: on a lingerie line and "slowly but surely" recording her ninth album. But "there's a lot going on with my kids and schools and adding new sports," she says. "I'm going to try to do my best to do an amazing album. But it's not my full priority right now." With the residency powering her career, Spears can more easily afford to realign those priorities.

Buy This Issue!
By Andrew Hampp