Here's a list of things that Big Sean admittedly gives an "F" about: his family; his girlfriend, pop star Ariana Grande; his business; his charitable foundation; "how people feel"; Dragon Ball Z; professionalism; video games; all the Batman movies; the "good as hell" burritos at Chipotle.

The list of things Big Sean doesn't give an "F" about is significantly shorter: "you." Not you, the reader. But "you," the unnamed antagonist of the Detroit native's recent smash "I Don't F--- With You," which features him happily insisting "I don't give a f---" 26 times. You can guess who the song is about, considering the tabloid coverage of the April 2014 breakup of the Kanye West protege and his former fiancee, Glee star Naya Rivera, who married actor Ryan Dorsey just three months later.

"I had that song a year ago, when I was in that relationship, but obviously everyone thinks it's about her," Sean says with a sigh, having been asked this question nonstop since the song's September release. "I write about what I go through -- not fake shit. That's my responsibility," the 26-year-old, born Sean Anderson, adds, sipping a berry smoothie with coconut milk at his expansive house in the hills above Studio City. (He lobbied unsuccessfully for this detail to be left out -- ostensibly street cred and fruit smoothies are mutually exclusive.) "I want to write about what really happens, but I'm not a spiteful person. I've answered so many questions about it, people are going to think what they want no matter what I say."

But in the same breakup anthem, Sean admits, "drama makes for the best content." And in an industry that increasingly relies on extracurricular activities to sell music, nothing attracts clicks like a scorched-earth subtweet rant in rap form. "People want that -- I get it," says Sean. Especially when it's delivered in the most nimble verses of your career, with production from Kanye West and DJ Mustard, and featured vocals from rap legend E-40. "I Don't F--- With You" ruled Hot R&B/Hip-Hop Songs for eight weeks -- his biggest hit on the chart, and the perfect follow-up to his uncredited vocals on Grande's Hot 100 No. 2 "Problem."

"It's the non tangible rap element that made it a hit," says No I.D., the producer and Def Jam executive. "The fact that everyone feels like that about somebody. If you're not a rap fan, you can still understand and relate to it, out of the gate. It was a record I pushed and fought for and everyone else in the building felt the same way."

Despite his age and new breakthroughs, Sean is a music vet: Raised by his English-teacher mother and "the best grandmother ever," a recently deceased World War II vet, in Detroit, he became a regular on local station WHTD as a teen by winning weekly rap battles. In 2005, when he heard West was appearing on the station, he rushed over, ran up to his idol in the hallway and freestyled on the spot. Two years later, after turning down a scholarship to Michigan State University to focus on music, he signed to West's G.O.O.D. Music.

Now, Sean is finally hitting his stride. The success of "I Don't F--- With You" is setting up his third album, Dark Sky Paradise (out Feb. 24 on G.O.O.D. Music/Def Jam), perfectly, unlike its nine-months-delayed predecessor, 2013's Hall of Fame, which has sold 157,000 copies, according to Nielsen Music -- less than half of his 2011 debut, Finally Famous. After that disappointment, Sean has a lot to get off his chest. "You have no idea how hard it is to fit what you want on an album," says Sean, who's wearing a gray T, ripped black jeans and a stunning gold watch and diamond band. "The label didn't want me to have over 10 songs on my album -- you've got to be kidding me! I had to fight."

Unlike past efforts, Sean recorded entirely at "The Trilogy," his nickname for his three-story home with a basement studio. Dark Sky Paradise, which features Drake, West, Jhene Aiko and Lil Wayne and beats by Mustard, Mike Will Made It and Boi-1Da, is so freshly completed that mastering only wrapped up the night before. "Everyone came through here. Even Kanye was in that room right there," says Sean, pointing to the small but high-end recording facility. "Working from home helped me live the music."

And it's a nice way to live -- a 4,500-square-foot, five-bedroom, $1.7 million mock-Mediterranean estate so high up it practically requires an oxygen tent. The top level features the sparse furnishings of a frequent flier in a too-big home: a few anime stuffed bears, two Rothko-ish paintings, empty shelves. The bottom floor has a man cave with a Pac-Man arcade game, Big Sean slot machine, framed jersey of Detroit Lions icon Barry Sanders, wet bar and board games. The backyard sprawls down a hill interrupted by a recently built ominous black gate -- a necessary evil, perhaps, when you're dating one of the world's biggest pop stars.

"She's supercool -- the coolest," he says about Grande, whom he met at KIIS-FM's 2012 Wango Tango concert. She said she was a fan and rapped his lyrics to him. "Ever since, we've been friendly, hung out once in a while, and it just evolved. I respect her -- so I don't think I should talk about it." 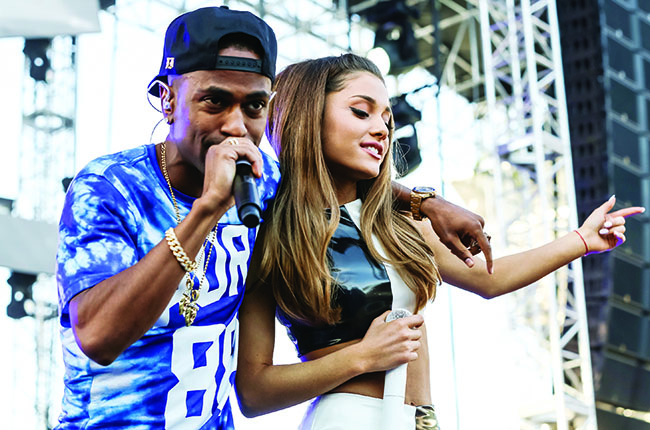 Sean is much more open about his grandmother, who suffered a debilitating stroke and later died in December. "In a selfish way, it was hard to say goodbye," Sean says, "but when I stepped back, I was happy she was free of the wheelchair and didn't have to go through that." Her death shrouded the making of the album; one song is dedicated to her. "It's my darkest work, but it makes me happy because I put my heart into it," he says. "I hope they can feel the sincerity, the honesty -- this has more soul."

When asked if the gray skies surrounding the album's genesis -- death, heartbreak, commercial disappointments -- have passed, he takes a long pause and grins. "I don't know -- I'm still right here," Sean says. "Check with me in a few months and ask me again."