Billboard Cover: Duran Duran on Pushing the Pop Envelope, Staying Power and Why Harry Styles Is a 'Good Chap'

On a boiling July day at a photo studio in South West London, 56-year-old Duran Duran frontman Simon Le Bon is in full flamboyant mode, mincing and strutting, sucking in his cheekbones and giving what might just be his best sex face. Around him, his bandmates -- drummer Roger Taylor, 55; keyboardist Nick Rhodes, 53; and bassist John Taylor, 55 -- congregate, voguing with chins thrust forward. “We used to do three or four shoots a week at our height,” says Taylor (that’s John, not Roger; Roger, no relation, is a man of few words, most of them inaudible). Occasionally, Le Bon calls for the band’s manager -- “Wendy! Wendy!” -- to check that the sunlight pouring in through the window above is not casting unflattering shadows on his face. The singer is still handsome but no longer quite a pinup; natural light can be cruel.

If he continues to take pride in his looks, the band takes pride in its sound. Duran Duran’s new album, Paper Gods (due Sept. 11), is an unaccountably robust affair for an act that could simply bask in its past glories, touring the nostalgia circuit like many of its ’80s peers. The band didn’t even have a label until the album was mostly completed, at which point John presented it to Dan McCarroll, president of Warner Bros. Records. “I thought the record was amazing,” says McCarroll. “It’s clear they really want to have a hit with it.” 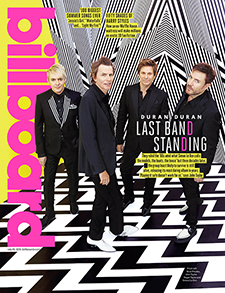 “They’ve always been so interested in pushing the envelope,” says Mark Ronson, who co-produced this album (and also oversaw 2010’s All You Need Is Now). “We think of [their hits] as bubbly pop tunes, but they were the first to use drum and vocal samplers.” Paper Gods features contributions from co-producers Ronson, Nile Rodgers and Mr Hudson, plus Janelle Monae, John Frusciante and even actress Lindsay Lohan, who provides a spoken-word interlude on “Danceophobia,” because, explains Rhodes, “We wanted something like [the sinister voiceover by] Vincent Price on Michael Jackson’s Thriller, but with more of a sexy girl vibe.” Le Bon had met Lohan a decade earlier, after she approached him to say she had once gone to a party in costume as him.

Now well into midlife, the men live in considerable comfort (mainly in London; John is in Los Angeles). They pursue quieter lives: “Sailing is my big thing,” says Le Bon; John likes watching soccer; Rhodes recently put out a solo project under the moniker TV Mania. They attend fewer parties, and date fewer models; in Le Bon’s case, there’s just the one, Yasmin, to whom he has been married for 30 years. (They have three daughters -- the oldest, Amber, 25, is herself a model.) John is married to his second wife, Gela Nash, co-founder of the fashion label Juicy Couture, and Roger is also on his second marriage, to a Peruvian woman named Gisella Bernales. Rhodes is divorced, and currently single. Outside of recording and touring, the men only occasionally socialize.
The air they give off may be one of contentment, of pipes and slippers, but musically they remain ambitious. Paper Gods tackles global issues. The ruminative, seven-minute title track has a bitter message about consumerism, referring to “The slaver in a sweatshop/Putting trainers on your feet.” It’s hardly 1981’s “Girls on Film,” the first of the band’s 11 top 10 Billboard Hot 100 hits.

Duran Duran has always been fun and flashy, if a little lite. But the band, which writes its own music, is more influential than it gets credit for. In 1983, it had the idea that Rodgers, then of Chic, might remix its single “The Reflex.” This was at a time when remixes were for club acts only, not pop bands whose keyboardist was pretty like a girl. The group’s record label, Capitol, considered Rodgers’ treatment of the track “too black-sounding” and only released it after much stalling. It became Duran Duran’s biggest hit, reaching No. 1 on both sides of the Atlantic in 1984.

“That’s why we set the bar so high: because of our extraordinary legacy,” says John. “There are many artists I’m fond of who will put out a new record, but when I hear it, all I really want to do is listen to their old records. That’s what we’re up against.”

Duran Duran formed in 1978, in Birmingham, England. Inspired by Chic, Giorgio Moroder, Ultravox and Gary Numan, it was a pioneer of the New Romantic movement, which comprised all-male acts unafraid of makeup and cutting-edge (read: ridiculous) fashion. Don’t even mention the haircuts. The scene quickly faded, and elsewhere British pop, inspired by a collective hatred of a Margaret Thatcher-run government and defining events like the miners’ strike, became politicized. But Duran Duran remained unapologetically hedonistic. “Oh, we were never political,” confirms Le Bon.

The perfect musical representation of the 1980s socioeconomic group that became known as yuppies, the band was in every sense profligate. It spent a fortune on videos that were not particularly deep, being either Mad Max pastiches (“Wild Boys”) or advertisements for champagne-soaked decadence (everything else).

But in many ways, it was the perfect MTV band, each video an event, the conviction that the bigger the budget -- “Rio” was shot on a yacht in Antigua -- the bigger the impact. Australian director Russell Mulcahy, who helmed many of its videos, won a Video Vanguard Award at the 1985 MTV Video Music Awards for his efforts. Each video, says Le Bon, had to be more memorable than the last.

“I do remember we fell foul of the politically correct brigade with ‘Electric Barbarella,’ ” he says of the group’s spectacularly ill-judged 1997 clip that featured an underwear-clad, battery-operated mannequin that kissed the boys, then got busy with the housework. (This, incidentally, was not the work of Mulcahy.) Many of Duran Duran’s promos, comprising as they did of women in states of undress, would likely be deemed NSFW today. Le Bon isn’t familiar with the acronym. I explain.

“Is that a problem, then?” he says, testily. “We look back on our videos fondly.”

“We were of our time,” insists John. “Our videos were fun, jokey.”

They vigorously enjoyed the spoils of their success, dating models, sailing -- and occasionally sinking -- yachts. (In 1985, Le Bon capsized his boat, Drum, during a race on the English Channel.) Rodgers, a collaborator of the band’s going back to 1982, remembers “having a blast” on shopping sprees: “They would shut down the stores for us. We had a saying: ‘When the going gets tough, the tough go shopping.’ ”

John, meanwhile, was developing drug and alcohol issues -- he once said of 1985, 12 months during which his appetite was mainly for cocaine: “Nobody ate that year” -- and was also craving, as he puts it, “a different singer, a different guitarist, a different drummer.” So he formed The Power Station with Robert Palmer (and then-Duran Duran guitarist Andy Taylor -- also unrelated -- who, exhausted by the lifestyle and intergroup acrimony, soon left the main band to become a solo artist and producer. He now lives in Ibiza). Rhodes, Le Bon and Roger formed their own splinter group, Arcadia. Roger was also quietly becoming a respected DJ, performing sets at Cielo in New York and Pacha in Ibiza.

Duran Duran, though, never broke up. The British music press openly loathed the act (John refers to “the stench of criticism and judgment”), but the public embraced it: the early-’80s albums Rio, Seven and the Ragged Tiger and Arena each shifted 2 million copies in the United States alone, according to Nielsen Music. And it was unafraid to take risks. In 1995, its covers album, Thank You -- which featured what might be called unusual interpretations of tracks including Public Enemy’s “911 Is a Joke” -- was widely derided, and the album it recorded with Timbaland in 2007, Red Carpet Massacre, was not considered a creative success. If ever there was an easy route, the band rarely took it.

A day after the shoot, the band reconvenes in an air-conditioned recording studio on what will be, at 98 degrees, the hottest July day on British record. Le Bon, alarmingly, is wearing shorts with white socks pulled high up on his shins, and leading the band through rehearsals for its forthcoming tour, including 12 U.S. dates.

Afterward, Le Bon changes into a black T-shirt, black jeans and black sneakers. John is in a baggy pair of Adidas sweatpants and an oversized white tank top. For someone who no longer does drugs, he remains impressively slender. Rhodes is the more studiously stylish, in a linen suit, but he has never been knowingly underdressed. He says that he considers the wearing of blue jeans “woefully pedestrian.”

But then, Duran Duran was friends with many of the rich and famous. People -- possibly jealous people -- accused the members of being shallow. Le Bon scowls. “ ‘Glamorous’ and ‘shallow’ are never words you use to describe your own life. But, yes, it was fun. It was fun hanging out with Princess Margaret, Prince Charles and Diana and Warhol, too. But that’s all the press ever talked about: the parties, the models, the boats, the booze. But we did work hard.”

Duran Duran today should be the beached whale so many had expected it to become. “We were the last band people thought would carry on,” agrees Le Bon. “They thought we were a flash in the pan, contrived, probably put together by management.” (He has “great sympathy” for One Direction: “They are a cash cow for so many people ... there’s a huge pressure to never take a break.” But Harry Styles “seems to be a decent chap. That makes me think he is handling it all very well.”)

Now, the concern is the band will be viewed as long in the tooth. John offers a crisp defense: “You don’t hear Beethoven again and think, ‘This is a nostalgia thing.’ Nor Shakespeare: ‘Oh no, another reading of Hamlet ...’ ” Then John looks to Pablo Picasso, “an artist that still had tremendous vitality into his 70s,” for inspiration, and Le Bon takes his from John Lee Hooker, because Hooker went on performing until he couldn’t anymore.

They may remain volcanically combustible -- Le Bon admits to “flaming, flaming arguments” during the recording process, and periods of “white-hot anger” -- but they now mostly resemble nothing so much as old married couples, each long-sufferingly mindful of the other’s kinks and tics. “It’s all part of being in a band, isn’t it?” the singer says with a sigh.

With relative contentment on the home front, then, why on earth would they give up the day job? It’s what they do, argues John. What else is there?

“I watched a documentary about the post-punk era recently,” he says. “It was all fairly monochrome, but then our video for ‘Hungry Like the Wolf’ came on, and it all suddenly went widescreen. See, we had it even then: that global vision. We wanted to make albums, to play Madison Square Garden, all that stuff. And you know what? We always felt entitled to it.”

Clearly, they still do. 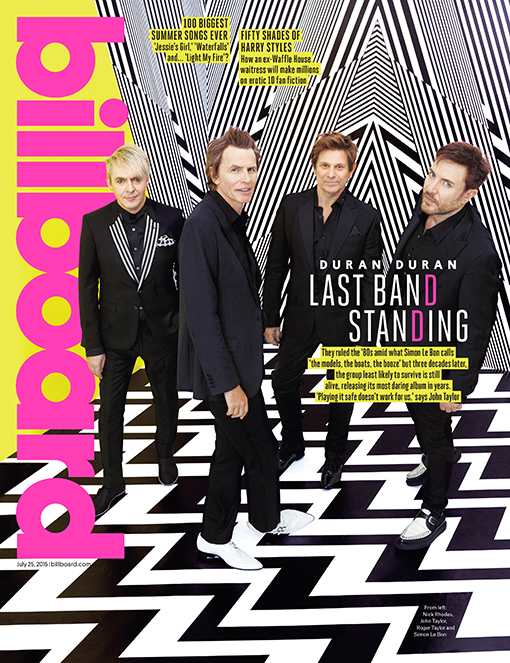