It's Been 1000 Days Since Rihanna's Last Album Release. What's She Been Up To?

Awards, amazing Instagrams and "American Oxygen" are just a few things keeping Rih busy since the release of "Unapologetic."

Look at that headline. A few years ago, it was unfathomable for Rihanna to take 1000 days (or a little less than three years) in between album releases. At the end of 2012 — the last year Rih put out a new collection of music, Unapologetic — the singer had released a whopping seven albums in eight years, including four straight fourth quarters beginning in 2009. And although Rihanna spent 2013 supporting her Unapologetic singles like “Diamonds,” “Stay” and “Pour It Up,” that year produced no new Rihanna album, and neither did 2014. We still have hope for this year, but no official announcement has been made yet. And just like that, 1000 days have passed since we were graced with a new Rihanna LP (1002, technically; Day 1000 was Sunday).

The 10 Most Badass Moments From Rihanna's 'BBHMM' Video

So what has Rihanna been up to in the 1000 days following the November 19, 2012 release of Unapologetic? A whole lot, actually, including dropping new singles, going on tour, playing shows and winning fashion deals (and awards). Check out an extensive roundup of Rihanna’s past 1000 days as a professional pop superstar:

Part of the reason why Rihanna’s eighth studio album feels so tantalizingly close is because the Barbadian superstar has been releasing single after single as of late. Last January, “FourFiveSeconds,” a stripped-down collaboration with Kanye West and Paul McCartney, was tossed out, and became a Top 10 hit, peaking at No. 4 on the Hot 100 chart. Then in March came “Bitch Better Have My Money,” a brash trap song that sounded more apropos of a proper lead single; that one hit the Top 20, and eventually received a gloriously violent music video. And in April, another single, the mid-tempo “American Oxygen,” was floated out, and ultimately peaked at No. 78 on the Hot 100. Combined, the three new tracks have sold 2.8 million downloads, per Nielsen Music.

Of course, Rihanna has released more than three singles since 2012’s Unapologetic. Since “Diamonds” hit No. 1, Rihanna has scored one other Hot 100 chart-topper: “The Monster,” from Eminem’s The Marshall Mathers LP 2 album, which spent four weeks in the penthouse in late 2013 and early 2014. Rihanna also helped Shakira notch another Top 20 hit with the duet “Can’t Remember To Forget You” in early 2014, and “Towards The Sun,” the moving single from the Home soundtrack, was released last February, but did not chart on the Hot 100.

This year has been Rihanna’s first since 2012 in which a major tour has not gobbled up part of her summer. In 2013, Rih spent eight months on the Diamonds world tour in support of Unapologetic, playing arenas with A$AP Rocky as her main support in North America. Later that year, “The Monster,” her second team-up with Eminem following “Love The Way You Lie,” became the duo’s second straight No. 1 smash, and a co-headlining concert tour (dubbed The Monster Tour) was set for August 2014. Although Eminem and Rihanna only performed six shows together, all six sold out, and the tour raked in $30.9 million in gross, per Billboard Boxscore.

Although Rihanna has yet to properly tour as a headliner in 2015, she has stayed busy performing her new singles on a variety of television shows and award ceremonies, after making the network TV rounds in support on Unapologetic in 2013. First came the live debut of “FourFiveSeconds” at the Grammy Awards in February, alongside Kanye West and Paul McCartney; a month later, Rih stepped off a helicopter at the iHeartRadio Music Awards for the live debut of “Bitch Better Have My Money.” In April, Rihanna played “American Oxygen” for the first time at the NCAA Final Four in Indianapolis, and she closed out the most recent season of Saturday Night Live by performing the new single as well as “Bitch Better Have My Money.”

On the non-televised front, Rihanna performed “Bitch Better Have My Money” at the 2015 Met Gala, and headlined DirecTV’s Super Saturday Night concert with Kanye West prior to this year’s Super Bowl. She also popped up as Eminem’s surprise guest at Lollapalooza last year, and reportedly wanted to do a free concert for the protestors in Baltimore this summer. So, Rihanna has been performing, but she’s spent 2015 carefully picking her spots.

No, the disaster that was 2012’s Battleship has not deterred Rihanna from placing a toe in the Hollywood pool. Following cameos in 2013’s This Is The End and last year’s Annie remake, Rih headlined the animated film Home, voicing one of the main characters in the March release and providing the single “Towards The Sun” for the soundtrack. As of now, she does not have any upcoming film roles announced.

Last year, Rihanna was awarded the Councial of Fashion Designers of America (CFDA) Fashion Icon Award after spending years straddling the line between music and fashion. A partnership with Armani in 2011 was followed by a spring collection of her own at Fashion Week in London in 2013, and later that year, Rihanna became the face of the French fashion house Balmain and partnered with MAC Cosmetics for multiples makeup lines. Since the Fashion Icon trophy was awarded last June, Rihanna has signed on to be a creative director of Puma and to become the new face of Dior. 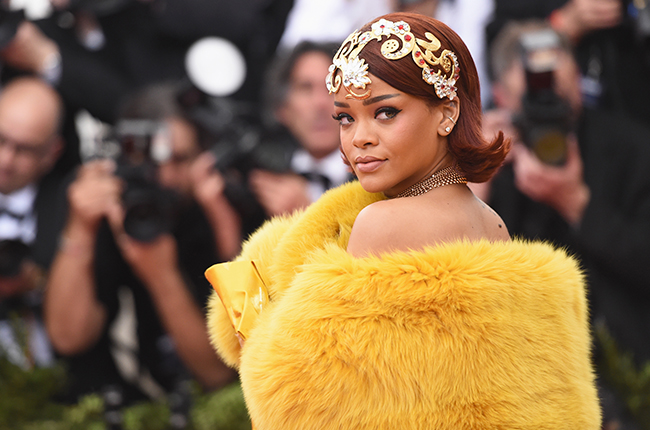 And the style deals just won’t let up: last month, Rihanna announced a collaboration with Stance Socks, and earlier this week, her new fragrance, RiRi, arrived online. All of these accomplishments have been complemented by countless magazine cover shoots — which sell tremendously, by the way.

And don’t forget that Rihanna is one of the many co-owners of Tidal, the music streaming service launched earlier this year. Rih partnered with Jay Z, Beyonce, Kanye West, Madonna and several other superstars to get the company off the ground, and debuted “American Oxygen” as a Tidal exclusive soon after its launch. The "Bitch Better Have My Money" video also started as a Tidal exclusive, with a four-hour subscriber event in Los Angeles helping to launch the NSFW clip. In addition to her style, cosmetics and fragrance endorsements, Rihanna linked up with Budweiser in 2013 for the beer giant’s ‘Made For Music’ marketing campaign, which also includes Jay Z and Justin Timberlake.

The crown jewel of being a Rihanna diehard: even when she’s not releasing albums, she’s often providing authentic, unbelievable entertainment through her social media feeds. Earlier this month, Rih posted a series of spectacular shots of herself celebrating at a Barbados carnival to Instagram, earning hundreds of thousands of likes from her 24.6 million followers (who patiently awaited her return during an extended IG hiatus). Her 50.1 million Twitter followers have been a little less well-fed lately, but she’ll still pop up to strike down an album rumor or shout out her fans on the platform. And with 81 million likes on Facebook, her posts about fighting cancer in Barbados receive thousands of eyeballs.

SO, WHAT’S BEEN GOING ON LATELY?

Last month, Rihanna became the first artist to cross the Recording Industry Association of America (RIAA)’s 100 million gold & platinum song certifications threshold, pushing her to No. 1 on the list of artists with the most digital single awards. Understandably, Rihanna fans want a few more songs to add to that pile of platinum and gold smashes!

Reps for Rihanna tell Billboard that there’s no update on the follow-up to Unapologetic, so fans will have to comfort themselves with the fact that the singer is joining The Voice next month as an advisor to the coaches, she might win a VMA for "American Oxygen," and that she is taking on dating rumors (Matt Barnes got a ‘nope,’ and new Chris Brown stories have started popping up) one at a time. Wherefore art thou, R8? We still don’t know, but at least Rihanna’s stayed plenty busy over the past 1000 days.