"Warm lava cake with vanilla ice cream,” says Jason Derulo. “That shit is unbelievable.” For a man as obsessed with staying fit as he is with making hits -- the 25-year-old is on the verge of scoring his 11th million-selling single, according to Nielsen Music, with “Want to Want Me,” now at No. 8 on the Billboard Hot 100 -- this qualifies as dirty talk. Lava cake is the food he fantasizes about most. And on this Tuesday afternoon, fantasize he must, because his menu consists of tuna straight from the can, water and a couple of spoonfuls of energy powder. He has a Billboard photo shoot tomorrow and swears by the fish as an emergency tummy tightener. “Try it!” he enthuses.

Today Derulo (born Jason Desrouleaux) is in the North Hollywood studio where he has been rehearsing daily with his six dancers. A heather-gray Air Jordan sweatsuit is draped over the result of his obsessive diet and exercise: a chiseled decathlete’s body, built for the stage as well as the camera. He says the powder is “like caffeine -- it gets you pumped before you work out.” When a frothy, caramel-scented cup of coffee arrives, he looks up at his assistant and says, “Cuz, I can’t have this. No sugar today.” His broad shoulders droop ever so slightly. 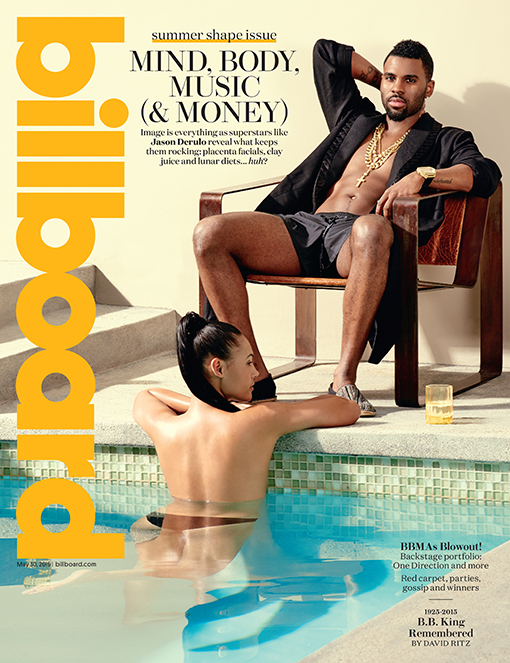 It’s hard work being Jason Derulo. But all that work made for a very, very good 2014. His bawdy earworms “Talk Dirty” and “Wiggle” went to No. 3 and No. 5 on the Hot 100, respectively, and he performed at the 2014 Billboard Music Awards with a set of pull-up bars. And 2015 is shaping up quite well: “Want” is a solid contender for song of the summer, and his fourth album, Everything Is 4, due June 2, boasts guests like Jennifer Lopez, Keith Urban, Meghan Trainor and Stevie Wonder. Derulo invited Wonder to sing and play harmonica on “Broke” when the two bumped into each other at a White House dinner for the Special Olympics in 2014. “If I hear that song on the radio and I’m not on it,” replied Wonder, according to Derulo, “I’ma whoop your ass.”

Derulo will also sit elbow to elbow with Paula Abdul and Nigel Lythgoe at the judges’ table on Fox’s So You Think You Can Dance, which kicks off its 12th season on June 1. “She’s like a fairy, man. Sweet and nurturing. The most likable person you’ll ever meet,” he says of Abdul with characteristic stoner enthusiasm. (For all the indulgences he shuns, he admits to smoking a lot of weed: “It’s from the earth!”)

Derulo doesn’t rap -- his newest material blends earnest soul with carnal beats and ’80s synth-pop -- but he’s in a class with guys like Pitbull and Flo Rida: hit machines who run on extreme discipline with a side of cheerful charisma. “He’s a damn good writer, quick with hooks and melodies,” says Abdul. “He totally knows the formula.”

You could say Derulo himself is the product of a formula: a combination of protein bars, push-ups and a willingness to cater to fans with a taste for beefcake. While male rockers and rappers are allowed their imperfect “dad bods,” R&B and pop stars must be studly as well as talented. Whether it’s Usher (a hero of Derulo’s) or Nick Jonas, sex appeal is now required to sell songs about love and sex, unlike the well-padded heyday of lovermen like Barry White. Derulo embraces this demand. Says rapper The Game, a good friend who regularly shoots hoops with the star (and their other basketball buddy, Robin Thicke): “If there are women around, J might take his shirt off in church.”

Fitness is Derulo’s religion. “Carrying a jug of water changes the world,” he says -- when we think we’re hungry, we’re often just thirsty. To avoid hangovers, drink only vodka with soda (“You’re hydrating as you’re dehydrating”). Abstain from carbs, aside from fruit, and eat small meals throughout the day. His show rider? Puritanical. “No chips, no M&M’s, none of that,” says Derulo, who prefers organic coconuts and almonds. “How are you going to choose between Doritos and celery? If it’s in my face, I’m going to eat that motherf---er.”

Derulo’s manager Frank Harris says that in 13 years he has never once had to push Derulo to stay in shape. “He’s so committed to being a great performer, and he understands there’s a physical element to that,” says Harris. “I find myself telling him, ‘Maybe you should take a break from time to time.’ But he’s willing to do anything to make [his career] go.”

Hot 100 Chart Moves: Jason Derulo Jumps In With 'Want to Want Me'

Harris spotted a 12-year-old Derulo on a Miami basketball court while Harris (a former pro-hooper overseas) was in law school. He saw the boy’s tenacity and offered to coach him. “He was a good athlete,” recalls Harris, “but everything was between the legs three times and around the back. His game was too fancy.”

Before long, Derulo revealed his other ambition to Harris. Starting when he was 4, Derulo had copied Michael Jackson’s and MC Hammer’s moves from the TV in his parents’ living room in Carol City, the same Miami neighborhood Rick Ross and Flo Rida once called home. “It was the hood hood,” he says. Eventually he slipped out of the house at night to dance in the empty street. At 8, he wrote his first song, for a girl he had a crush on.

“My mom says I was an introvert,” says Derulo, gnashing gum. “I never saw myself that way, but I was always focused. I didn’t spend a lot of time doing things that I didn’t think would make me great. I studied all kinds of dance, all types of music. I got good grades. I started hitting the recording studio around 13.”

Derulo’s dad, a Social Security administrator, made him do sit-ups as a kid, but he wasn’t always fit. “I had a lil’ chub-chub moment from ages 7 to 11,” he says. “If somebody was teasing, they’d go straight to my fat. I was so insecure, I kept my shirt on in the pool, which is the worst because it sticks to your stomach anyway. I never wanted to go back.” Today, he’s only insecure about his “beat-up” dancer’s feet.

Billboard Cover: Jason Derulo on the Success of 'Talk Dirty' (Despite His Mom's Disapproval)

For two years, Derulo majored in musical theater at the American Musical and Dramatic Academy in Manhattan. “I’m singing, dancing and having the time of my life,” he remembers. “Then I landed a role in Rent on Broadway. It could’ve been a secure job, but I would’ve been locked into [theater] forever.”

Since he had been picking up songwriting gigs for the likes of Sean “Diddy” Combs and Birdman and envisioned landing a record deal, Derulo turned the gig down. It worked -- Warner backed his 2009 debut single, “Whatcha Say,” which hit No. 1 on the Hot 100 and eventually sold more than 4 million downloads. In 2012, between his first and second albums, Derulo broke his neck while attempting to do a backflip during rehearsal; he spent six months recovering, then returned to the gym, practicing the same flip that nearly paralyzed him.

These days, Derulo runs through the brutal Insanity workout DVD before he takes the stage, just to get limber. He’s always prepping for the next level. “I know it’s hard today, but at some point this will be your warm-up.” That’s his favorite workout slogan, but he says something offhand that’s a whole lot catchier: “When you take your shirt off, you kind of want to be shredded.”

Derulo lavishes attention on more than his body. He’s building a hospital in Haiti -- where his folks emigrated from before he was born -- through the Just for You foundation that he started with his mother, a former immigrations officer. And he’s renovating a 12,500-square-foot “castle” he bought in Los Angeles, putting in an NBA-regulation basketball court and shark tank. He’s also commissioning black-and-white paintings of John Lennon, Prince, Janet Jackson and “people of that caliber” to decorate the place. (Derulo owns four more homes in Miami, one in Atlanta and a house-flipping business with his sister.)

Derulo has been single since he and American Idol champ Jordin Sparks split last fall after three years together. What does his love life look like now? “A deck of cards,” he says, slapping the table and laughing. But really, he’s “having a good time getting to know people.” He thinks Tinder looks fun, but he’s afraid a star like himself using it would be creepy: “It’d be like, ‘A million new requests today!’ That’s just wrong.”

He was gentlemanly about the breakup, even though Sparks told radio hosts he had leased, not bought, the BMW he gave her as a gift. (He responded by Instagramming the bill of sale, but later deleted the post.) “I do get tired of playing nice,” he says. “Especially when people think I did something wrong, or that she broke up with me. But it’s so behind me.” Later, discussing his binge TV-watching habits, he admits Empire gets one thing in particular exactly right: celebrities dating as a publicity stunt. “That happens all the time,” he says, without elaborating.

What would it take for him to get back into a relationship? “A miracle.” He maintains that the gym is the best place to meet women -- he prefers the chic Equinox in L.A.’s Encino neighborhood. But he’s married to his work in ways that seem almost literal: His studio setup includes vanilla-scented candles, bottles of vodka and cookie dough-flavored protein bars. The Game calls the vibe “Kama Sutric.”

“You can’t pull me out of the studio,” says Derulo. He estimates he and his collaborators wrote more than 100 tracks for the new album, many on a studio-outfitted bus in the wee aftershow hours on tour in 2014. “Songwriting is a muscle,” he says happily. “The more you do it, the better you get at it.”