Billboard Cover: Sam Hunt on Breaking Down Stereotypes, Teaming With Taylor Swift and Recruiting a 'Team of Misfits' on His Rise to Country Fame

Less than two years ago, Sam Hunt toured with two guitarists and a laptop. He couldn’t afford a drummer, so the computer spat out beats while he sang. But as with real drummers, there were reliability issues: Sometimes the laptop froze, and other times his show was interrupted by the sound of a Skype call or a Facebook update.

Hunt, the hottest singer in country music, now has a drummer, but at an early-August show at an outdoor amphitheater in Charlotte, N.C., it’s clear that he’s still plotting an organized and thorough departure from tradition. One of his guitarists, Tyrone Carreker, is a black man who tonight is wearing white clamdiggers that cling to his calves. During an extended version of “Single for the Summer,” Hunt raps about a minute of “Marvin’s Room” by Drake. At other shows, he has covered Beyoncé, Mariah Carey or Whitney Houston, and he sometimes comes onstage to Jay Z and Kanye West’s “N---as in Paris.” His band is performing beneath a banner with Hunt’s name and two rows of pastel flowers, a design the singer proposed after noticing an emerging trend for floral fashions. Can you name a male country singer who’s flowery? We’ll wait. 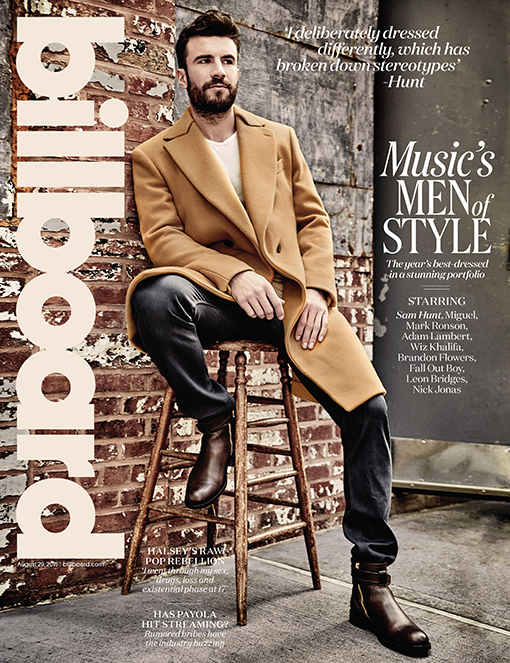 “My route is a little bit nontraditional,” says Samuel Lowry Hunt. “A lot of the people working in Nashville, they have a model. I don’t really fit into that.”

Tonight, as on most nights, he’s wearing a baseball cap with a flat bill, per current street style. Nothing about his look says “country,” even though the 30-year-old singer grew up in small-town Georgia. “I used to wear boots and jeans,” says Hunt prior to the show, still sweaty from a pickup basketball game at a local gym. But when people in Nashville “told me I had to dress like that, I was like, ‘Wait a minute. Why?’ So I deliberately dressed differently, which has broken down stereotypes. People who might not have listened to me if they’d seen me sitting on a hay bale in a barn on the front of a record -- they give the music a chance. The most flattering thing I hear is, ‘I didn’t think I liked country music before I heard your record.’ ”

When MCA Nashville released Hunt’s Montevallo in October 2014, it hit No. 1 on Billboard’s Top Country Albums chart in its first week. What has been most remarkable is his consistent sales: Hunt, Ed Sheeran, Sam Smith and Taylor Swift are the only artists who have remained in the top 30 of the Billboard 200 since the start of 2015. (Montevallo has sold 694,000 copies to date, according to Nielsen Music.) When Swift brought Hunt onstage in Chicago in July to duet on “Take Your Time,” the second of his three consecutive No. 1s on the Hot Country Songs chart, she called him “the coolest new thing that country music has going on.”

Hunt admits he had “a few more nerves than normal” before Swift’s show, due to the size of her production and the scrutiny of her 55,000 crazed fans. “I always appreciated the personal element of her songwriting. My favorite way to write is to be honest and unique, so in that regard there’s a similarity.” And Hunt is the first Nashville act since Swift to make significant inroads in other formats: “Take Your Time,” a half-spoken, half-sung ballad, has plenty of airplay at top 40 and adult contemporary radio, reaching 27 and 13, respectively.

Not everyone likes his excursions outside the boundaries of country, though. Three nights earlier, when ABC broadcast CMA Music Festival: Country’s Night to Rock, Hunt sang “House Party,” and there was plenty of skepticism about him on Twitter. “Why is there a rapper onstage?” one person wrote. “Sam Hunt dresses so ghetto!” said another. And a third told Hunt, “If you really want to be country, drop the flat bill and pick up a cowboy hat and some boots.” Hunt has heard many such complaints. “It’s good to be proud of your heritage and your culture,” he says, “but pride can be perverted.”

After some 70 years of constant, sometimes radical, change in the sound of Nashville, there are plenty of country singers with non-country influences, and a similar skepticism arises -- as it does in hip-hop or EDM -- whenever fans feel the music’s purity is being compromised. Specifically, Hunt brings in influences from black culture and mixes them with modish imagery that doesn’t fit the old-fashioned norms of country masculinity, which require trucks, boots, beer and/or whiskey, and cute (but modest) girls in shorts.

Hunt can get away with scrambling codes, in part because he’s a muscular, 6-foot-3 jock who played quarterback in college. The combination of broad shoulders and brightly colored clothes makes his band difficult to pigeonhole. “I can’t tell if you guys are a football team or a boy band,” a bystander recently said to Carreker, a former college basketball player who was delighted by the comment.

“Traditionally,” says Hunt, “music has been a means of separating ourselves as people from another group of people. And now, music is starting to blend in a way that doesn’t allow us to do that as much.”

Much of his success resulted from a determined effort to “recruit a team of misfits,” with Hunt as the quarterback. The son of an insurance salesman and the oldest of three boys, Hunt grew up playing football, baseball and basketball in high school. He sang traditional hymns in a Methodist church and admits to “a mischievous side” that included being arrested: “It was nothing serious. I can still get into Canada.”

He began college at Middle Tennessee State University, where the football coach had him returning punts instead of playing quarterback, then transferred to the University of Alabama at Birmingham, where he had a promising junior year (58 percent completion percentage) followed by a disappointing senior year (10 touchdowns, 15 interceptions and only two wins in 12 games). In May 2008, while his pals were graduating, Hunt tried out for the NFL’s Kansas City Chiefs as an undrafted free agent. The Chiefs saw him play and didn’t invite him to training camp. Back home, Hunt shocked his relatives by announcing that he was moving to Nashville to be a country songwriter. No one in the family even knew he had been writing songs since he was 18.

“Maybe I was insecure, because being a football player was my identity. I didn’t see myself that way,” says Hunt. “But it took a long time before I decided to test out a song I’d written for my roommates, who were some of my closest buddies. I felt trapped inside a stereotype and was a little afraid to step out of it.”

Sam Hunt's 'Take Your Time' Crosses From Country to Pop

Two months after his NFL tryout, Hunt stuffed a couple of mattresses into his mom’s minivan, raided the freezer for provisions and moved to Nashville with his hometown pal John Worthington, who’s now his road manager. Worthington was Misfit No. 1. “We were scraping the bottom of the barrel for years, just trying to get by,” says Hunt.

He had some opportunities to co-write with Nashville veterans and deferred on their advice. “I kept hearing all these rules: ‘You can’t say that in country music.’ ‘You can’t use that kind of beat.’ I became so frustrated. It may have slingshotted me, in a rebellious way, toward doing something different.”

Like many Southerners his age, Hunt was raised in a world where hip-hop and country coexisted on people’s playlists. Because of sports, he had even more exposure to black culture. “On my teams, as a guy who grew up hunting and fishing, I was in the minority in terms of music and lifestyle. I became good friends with people who listened to R&B and rap. But it wasn’t just an issue of being around it -- I was naturally drawn to it, right off the bat.”

Hunt wanted to incorporate those influences into songs, but supposed experts told him it wasn’t allowed. Then he met Shane McAnally, who had not yet become one of Nashville’s most successful songwriters. “Shane was definitely the turning point,” says Hunt.

“I was just barely starting to have success with songs that were not traditional,” recalls McAnally. Instead of warning Hunt against taking risks, “I was saying, ‘Please, let’s go further.’ ”

As McAnally points out, it took confidence for Hunt to align himself with a songwriter who was gay, out and not entirely proven. “Six years ago, that wasn’t the smartest move. Today, it doesn’t take courage to work with me. Back then, he was one of a few -- and definitely the only man.”

Hunt focused on working with McAnally and another writer, Josh Osborne. “We became best buddies: me, Shane and Josh. There were no rules to what we wrote.” Kenny Chesney recorded their second collaboration, “Come Over,” which became a No. 1 country hit in 2012.

McAnally and Osborne were Misfits No. 2 and 3. Hunt filled out his team by hiring as his manager Brad Belanger, a restless videographer with lots of ideas but no management experience; and by working with another Nashville novice, Zack Crowell, a producer Hunt says “had been making beats for rappers, literally selling them out of his basement for cash. He didn’t know anything about country.” Crowell and McAnally co-produced Hunt’s debut, which includes a dubstep drop on “Break Up in a Small Town,” his next single, and turntable scratches on “House Party.”

It’s easy to focus on the stylistic digressions he takes on Montevallo, but there’s an equally important thematic difference: Women in his songs are treated very well, compared with his Nashville peers. “Respect for women was a very important part of my upbringing,” says Hunt, who shares a small house near the Nashville airport with his two guitarists and his road manager. “The women in my life demanded that from me.” He titled the album after the Alabama hometown of an ex-girlfriend he has never named, though all signs point to one Hannah Lee Fowler, a dark-haired beauty who rides horses and studied nursing. “I spent a lot of time talking to her about the songs and asking, ‘What do you think about this?’ Her perspective was a powerful part of me being able to connect with a female audience, not just a male audience.”

Don't Judge Country Star Sam Hunt Because He Was a Football Player: ‘I Had to Break Down That Stereotype’

Hunt is now famous enough to be noticed by gossip magazines, which reported that he “hooked up” with The Bachelorette star Andi Dorfman in June, a rumor both deny. “I’m single,” says Hunt, who adds that being a music star and being an athlete are “similar in the superficial attention they draw. Both require the ability to decipher between the pure and the impure.”

He isn’t sure what his second record will sound like, though at some point he wants to make an album “that’s more purely R&B” and also an acoustic record “that’s more traditional country.” His next step depends on what other Nashville artists do, and whether his digressions become the new normal. “I study what’s happening in music,” he says. “I want to sound different than everybody else. To use a football phrase, I try to zig when other people zag.”

Check back to Billboard.com on Thursday for more profiles from the Music's Men of Style special feature, including cover guys  Adam Lambert, Miguel and Wiz Khalifa.